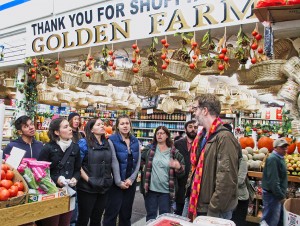 On Oct. 13, a 13-person multinational group from “99-Pickets” with Labor Occupy Wall Street and Brooklyn’s Kensington OWS took action to support Golden Farm Grocery workers in New York City. They delayed lines of store shoppers, customers who declined to boycott the store as the picketers requested. The boycott will continue until the boss negotiates the union contract and gives back pay — minimum wage and overtime — to these immigrant workers.

The workers’ supporters offered payments in pennies to buy groceries, then couldn’t decide on purchases, and changed them at the last minute or stalled on paying. Others handed shoppers fliers about the workers’ plight. John Dennie and this writer insisted that seniors pay lower rates and offered pennies as payment. The irritated managers took their baskets off the cashiers’ counters.

Finally, activists gathered near the cash registers for a ‘“mic check!” They left chanting, “We’ll be back and we’ll be stronger! We won’t take it any longer!”

The “99-Pickets” members loudly explained why everyone should support the grocery workers’ struggle — which is getting daily support from Communities for Change and the union they voted to join: Retail, Wholesale and Department Store Union Local 238. Reportedly, owner Sonny Kim and the union will meet within days.