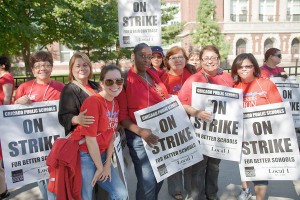 Sept. 17 — The popularity of the Chicago Teacher’s Union’s struggle for the future of the city’s children against privatization and educational apartheid continues to surge as of day eight of the strike.

According to Capitol Fax, a new poll conducted by We Ask America found that 55.5 percent of respondents approved of the CTU’s decision to strike. The poll also indicated that in communities hardest hit by Mayor Rahm Emanuel’s incessant drive to privatize public schools, support was even stronger for the striking teachers — 63 percent of African Americans and 65 percent of Latinos/as approved of the strike. When asked who was “most to blame” for the strike, over 34 percent felt that Emanuel’s intransigence was at fault, and an additional 19 percent blamed the school board. (ctunet.com, Sept. 13)

Service Employees Local 1 released a statement of solidarity declaring, “The Service Employees International Union stands in solidarity with 26,000 striking public school teachers, clinicians and paraprofessionals of the Chicago Public Schools. The Chicago Teacher’s Union is calling for a better school day and adequate resources for students, as well as fair compensation and improved job security and training for teachers. SEIU supports the CTU in their strike. … Strong public schools are critical for working families in Chicago. SEIU Illinois calls on Chicago Public Schools to give our students, schools and teachers the resources they need to succeed.” (seiu1.org, Sept. 8)

Emanuel had a “contingency plan” of scab schools lined up. According to FightBack! News, “One parent said the contingency school in his area was supposed to receive 1,000 students, but instead only 60 showed up.”

According to Sarah Chambers, a member of the CTU bargaining committee, “The contingency plan schools were a colossal failure. The fact that almost no students showed up at these schools displays the parents’ complete mistrust for the CPS’ board of education and CPS’ ability to provide a safe place for the children of Chicago.” (fightbacknews.org, Sept. 11)

The United Neighborhood Organization has used the strike to try to boost enrollment in their nonunion, publicly funded charter schools. The UNO portrays itself as a grassroots community organization, but it has been in league with the administration of the notoriously corrupt former mayor, Richard Daley (and now Emanuel), virtually since its inception, causing many genuine grassroots organizers to label it an “astroturf organization.” (http://tinyurl.com/8rgp6mt)

The UNO has a racist history of keeping Black children out of its schools, and now its CEO, Juan Rangel, is trying to further his own union-busting scab career by parroting the mayor’s line on the strike.

Meanwhile, on the picket lines, spirits remain high. Kenyatta Forbes, a young teacher at Fiske Elementary School on the South Side, told WW, “It’s simple. You wouldn’t ask someone who isn’t in the health care field to reform surgery practices, so why ask the private sector to reform education? Teachers need to have more involvement in policies. That’s how you close the achievement gap. [You have to] include the people who have the most impact on students — the teachers! This strike is a war of wills. And from the epic display of solidarity today, our will is high! We have everything to lose and everything to gain. It’s a strange dichotomy.”

Nathan Johnson, a teacher at Lakeview High School on the North Side, told WW: “Much of the reason why we are in the situation we are in boils down to one thing: respect. Mayor Emanuel, the board of education, the media, etc., have all painted a picture of us that simply isn’t true: that we are all lazy, that we are not doing our jobs, and that we can’t be trusted to know how to teach our own students. In essence, they act as if we the teachers are the problem — forget the overcrowded classrooms, the socioeconomic issues in many of our communities, the lack of resources in our schools.

“The board is constantly micromanaging us, giving us new curriculum, standards, programs, and other such top-down initiatives year after year that are applied to many schools across the city, not taking into account the individual needs of each school. And year after year, these initiatives fail and are replaced by a new crop that later fails and the cycle repeats ad nauseum. All of these initiatives are dreamed up by people in the ivory towers of academia. No one ever asks us, ‘what resources would you like?’

“I truly believe that this strike has implications that go far beyond Chicago, and I feel that it is absolutely imperative that we take a stand and say enough is enough!” Read Johnson’s statement in its entirety at workers.org.