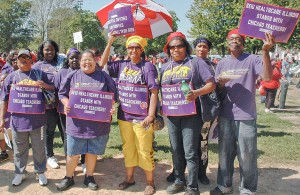 On Sept. 18, the Delegates Assembly of the Chicago Teachers Union announced the suspension of the one-week strike. The union membership will vote to ratify the contract over the next two weeks according to CTU president, Karen Lewis.

Sept. 17 — The Chicago teachers’ strike, which began on Sept. 10, has been extended to allow more discussion of a tentative deal worked out this past weekend between the Chicago Teachers Union and the Chicago Public Schools.

According to some CTU Delegate Assembly members, the deal didn’t go far enough in settling some of the issues that sparked the walkout.

One unsettled issue, in particular, is that the CPS wants to shift students into charter schools — non-unionized for the most part and therefore cheaper to run — and consolidate neighborhood schools whose enrollments have declined.

There are already 96 charter schools in Chicago. The union states that Mayor Rahm Emanuel wants to expand that number by eliminating 20 percent of the current 681 schools in the CPS.

The CPS would be allowed to use standardized testing to evaluate teachers. Under some proposals for this testing, it would consume 20 to 25 instruction days a year. The deal also doesn’t put enough limits on the power of principals to hire whomever they want.

These are some of issues that led the CTU Delegate Assembly, with 800 elected members representing all work sites, to decide to spend a proposed two days talking to members each delegate represents, while the strike continues.

CTU President Karen Lewis said, “This union is a democratic institution, which values the opportunity for all members to make decisions together. The officers of this union follow the lead of our members. The issues raised in this contract were too important, had consequences too profound for the future of our public education system and for educational fairness for our students, parents and members for us to simply take a quick vote based on a short discussion.” (ctunet.com, Sept. 16)

Emanuel’s immediate response to the extension was to announce that the city would seek an injunction forcing the CTU back to work, since it was striking over demands that included class size and resources, not legally permitted under Illinois law. Cook County Judge Peter Flynn stated that the earliest day for an injunction hearing if there is no settlement is Sept. 19.

The fundamental issues that transcend the CTU strike — poverty-stricken communities and the nationwide drive to privatize education — reflect the current global crisis of capitalism, including the drive to maximize profits at the expense of human needs like education.

Since teacher unions are the main obstacle to this privatization and the huge profits that will flow from this process, a whole multibillion-dollar industry has grown up around testing students and using the results to “flow through” to the evaluation of teachers.

Of course, all parents want the best education possible for their children, and teachers are an essential part of this process. But even the best teacher can’t overcome stifling hot or freezing classrooms, leaky windows, no textbooks until weeks after school starts, no libraries, no music or art instruction, no physical education — all issues the CTU has raised numerous times with the people of Chicago.

Even if the CTU Delegate Assembly approves the contract and the teachers go back, the membership will still have to vote on accepting it.

Solidarity from other unions

The struggle in Chicago to defend public education from the attacks of a Democratic mayor, who was the chief fundraiser for the Democratic Party’s national campaign until last week, has drawn widespread support. Hundreds of unions all over the country have passed support resolutions and made contributions to CTU’s strike fund.

The Boston teachers union stands out. Even before the CTU struck, it contributed $1,000 to the CTU’s strike fund, according to a post on the American Federation of Teachers’ Peace and Justice listserv. But when Emanuel claimed at a press conference in early September that they had settled without a strike, BTU took out a full-page ad for $6,000 to rebut him in the Chicago Sun-Times.

The ad pointed out that the BTU does not have the right to strike, a right denied most teacher unions. It said, “Thank you for mentioning our contract settlement, which came about as a result of a mutually respectful conversation between the parties. Perhaps you can learn from us — and begin to treat your own teaching force with the same respect.” (Boston Globe, Sept. 14)

Maria Elena Durazo, leader of the Los Angeles County Federation of Labor, AFL-CIO, spoke on the CTU strike, stating, “No one knows more about teaching than teachers. Politicians and other so-called education experts think they know more about educating children than the professionals who are in the classroom every single day. Some politicians want to blame teachers for a poorly funded public education system. We hope the strike is resolved as quickly as possible. In the meantime the Los Angeles County Federation of Labor is sending $10,000 to support teachers as they continue to fight for public education.” (ctunet.com, Sept. 13)

The CTU held a large, Wisconsin-style support rally in Union Park on Sept. 15, which drew over 30,000 people, not only parents and members of other Chicago unions but also busloads of teachers from Madison and Milwaukee, Wis. After the rally, the protest marched through the West Side communities of Chicago.

Bob Peterson, president of the Milwaukee Teachers Education Association, started his speech with “Greetings from the state where teachers lived to fight Governor Walker to the city where teachers are standing up against Rahm Emanuel.”

He went on: “At the time [of the Wisconsin protests in 2011] visiting teachers from Chicago came up to me and said, ‘You teachers in Wisconsin are our heroes.’ And today I come to say to you, ‘You teachers in Chicago are our heroes.’ You demanded that public education be a priority for the city, not privatized charters, not private voucher schools, not turnaround schools but public schools.” (examiner.com, Sept. 15)

Lewis gave the final speech. Obviously tired and angry, she said, “I am tired of billionaires telling us what we need to do for our children as if they love our children more than we do.” One of the most prominent members of Emanuel’s school board is the extremely wealthy, hotel heiress Penny Pritzker.

Lewis challenged the school board and City Hall — along with the Bill Gates Foundation and the Broad Foundation, which push business-administration graduates with no teaching experience into education leadership — to turn off their air conditioners and face the same environment as teachers when they’re working in Chicago schools.

She asked, “I want to know why when we ask for textbooks and materials on the first day, on the first day when children walk into a building, that somehow we are being unreasonable. I want someone to tell me why that is.” (examiner.com, Sept. 15)

Lewis reminded the audience that the CTU was still on strike and that the agreement they had with the CPS was just a framework.