Hundreds of striking coal miners marched 285 miles from Asturias on Spain’s north coast to the capital city of Madrid, where thousands of other workers joined them as they entered the city. Hundreds of thousands of others came to show solidarity as the miners’ three-week trek ended with a massive demonstration on July 11. 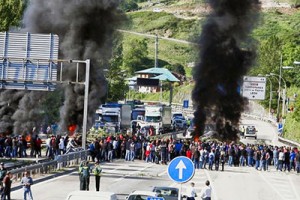 Workers, supporting the striking miners, block a motorway in Asturias in June.

Thousands of striking miners also came on buses to join the protests. They felt the support from so many of their fellow workers, who have suffered from government-imposed austerity measures of higher taxes, layoffs, wage cuts and reduced crucial services and who face a new round of cutbacks.

The chant of “Yes! Yes! They do represent us!” echoed throughout the huge crowd, as the people embraced the miners. Their banners read, “We are all miners.”

Alejandro Casal, 28, an Airbus factory worker marching with fellow union members, said the miners’ protest “isn’t only their struggle. It’s a struggle for the working class. … The people need to be here on the street to say `Enough is enough.’” (Huffington Post, July 16) 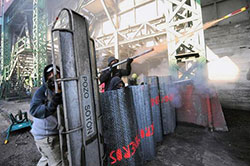 This comes on top of a 25 percent jobless rate in the country, with 50 percent of youth unemployed — dis­astrous rates for the eurozone’s fourth largest member.

What sparked the miners to strike was the government’s plan to cut coal-mining subsidies by two-thirds, which would undoubtedly result in mass layoffs in the mines. Seeing that the livelihoods, in fact, the very lives, of 30,000 miners were at stake, the miners’ union declared a strike to oppose the subsidy cuts.

Eight thousand miners went on strike on May 31. They have stood up to police batons, tear gas and arrests. The miners have militantly set up roadblocks and even stopped trains in their region of Asturias, which borders the Atlantic Ocean north of Madrid.

Asturias has a long radical history. In 1934, the region was declared a socialist republic for a month while a mass workers’ uprising was taking place. It was also a stronghold of anti-fascist fighting during the Spanish Civil War and during Francisco Franco’s fascist regime.

Once one of the most prosperous areas of Europe, Asturias has been plagued by closures of steel mills and mines. Like the rest of the Spanish state, unemployment is high there and poverty is growing. Yet, the workers in Asturias are drawing on their fighting traditions and refusing to accept the government’s austerity plans.

On July 11, solidarity with the miners was evident on the streets of Madrid. The youth movement of “Indignant ones” — a movement that preceded and helped inspire the Occupy movement in the U.S. — was there in large numbers. So were members of labor unions, communists, socialists, anarchists and countless others who support the miners.

That labor unionists and the Indignant ones were endorsing the miners’ strike and accepting the miners’ combative spirit and tactics against the bosses and the police shows the potential for a generalized struggle of workers.

Protesters defended themselves byturning over fences and throwing rocks.

Some set off firecrackers and makeshift explosives. Witnesses saw officers wielding batons and many demonstrators hit by rubber bullets. Approximately 43 protesters, including children, were injured and required medical treatment. Reportedly, some police were injured.

Earlier in Asturias, using hand-made rocket launchers, miners fired back with golf balls and potatoes at the oncoming police, even aiming at police helicopters and police van windows.

The miners plan to stay in Madrid and continue their actions.

Thousands of Indignant demonstrators denounced austerity cutbacks on July 13. They demanded that Rajoy “Resign! Resign!” as they rallied outside his Popular Party headquarters. One sign read, “They call it democracy and it isn’t.” As the protesters headed to the Socialist Party office, police pushed them back with batons, but they regrouped and marched on to the parliament.

Both major capitalist parties, the opposition social-democratic Spanish Socialist Workers Party and the ruling center-right Popular Party have imposed austerity programs. They are both losing popular support throughout all regions of Spain. They have no answer to the economic crisis.

The Spanish government is following the trend set in Brussels and Berlin in reaction to the economic crisis: It is forcing the 99% to bail out the super-rich 1%. In Spain, as in the rest of the world, a bigger, wider conflict between the wealthy bosses and the working class can be expected. Another national protest has been set for July 19 that will be the first stage in the upcoming struggle.