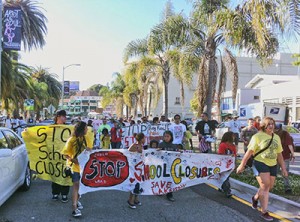 Oakland, Calif. – The city of Oakland, Calif., and its school district somehow found the funds to order a police raid on a group of parents, teachers and children who were occupying the site of Lakeview Elementary school. They took this action despite the layoffs, budget shortfalls and a $2 million school bond debt to the banks.

Forty Oakland school and city police evicted a small but committed Lakeview community from the schoolyard on July 3 at 4 a.m. Most people left voluntarily but police arrested two activists, who were cited and released.

Supporters had occupied the school site since June 15, the last day of school. They have been demanding the reopening of Lakeview and four other struggling Oakland schools. The Oakland Educational Association, the teacher’s union, has given a great deal of support to this important struggle. Additionally, the San Francisco Labor Council recently passed a resolution backing the Lakeview community occupation and criticizing the attacks on public schools.

The Oakland Unified School District has slated Lakeview to be turned into administrative offices, and has directed that Santa Fe Elementary, another closed school, be leased to a neighboring school district. The OUSD has only promised to provide transportation for Santa Fe students for one year. However, district officials have not announced any plans to transport the students — who are predominantly African American and Latino/a — from four other neighborhood schools to their new schools.

Lakeview’s sit-in organizers released a statement, which stressed, ”We have been evicted but not even close to defeated. Join us and build a militant resistance to fight for quality public education.”

Later on July 3, they organized an emergency rush-hour rally at Lakeview Elementary. More than 250 people gathered on the school’s lower steps to show their support for this struggle. A new fence had been erected around the school since the early morning police raid, effectively keeping supporters off the school site.

Joel Velasquez, a parent leader of this struggle, explained that he had tried for years to get the school district to put up such a fence to protect the children because the school is located in a very heavily trafficked neighborhood right off a freeway ramp. “Now, the fence is finally put up, but it’s to keep the community out,” he emphasized.

After a brief rally, supporters went on a spirited march, winding their way through an upscale Oakland residential neighborhood. They were taking their protest to the home of School Superintendent Tony Smith. Their chant, ”Open our schools! Close our prisons! Who’s our future? It’s the children!” resounded through the streets.

Lakeview parents, teachers and students rallied in front of Smith’s home, urging the school official to reopen the schools or to resign. Smith was nowhere to be seen. This prompted Miles, one of the young children active in this struggle, to ask: ”Where is Tony Smith? Why won’t he come out and talk to us?” Miles and a dozen other children led the march to Smith’s home.

The Lakeview coalition announced plans to continue the free People’s School for Public Education across the street from Lakeview at Splash Pad Park. They invited all to come and support the school. Several teachers and community supporters announced plans to run for school board. For more information, see ­saveoaklandschools.org.