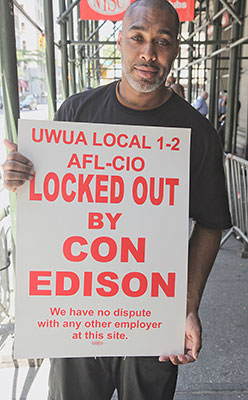 New York — Con Edison, the utility company that supplies electricity, gas and steam to New York City and Westchester County, locked out its 8,500 workers, who belong to Utility Workers Local 1-2 on July 1 at 1 a.m.

While UWUA Local 1-2 was willing to continue working, but not willing to give up its right to strike, the company took this quick, unannounced action against the workers to keep them from an unannounced strike. Con Ed doesn’t seem to see the contradiction in doing what it accused the union of considering, and then blaming the union for the lockout.

Many union members, both in UWUA Local 1-2 and in other unions, see this lockout as a “war on workers” for which Con Ed had been preparing over a long period. It had 5,000 supervisors and retirees ready to roll on July 2, press releases and white papers written, a plan to release ads and other propaganda that claimed it needed concessions from the union on pensions.

John Melia, a spokesperson for Local 1-2, termed the situation “grim.” He said, “It’s apparent to us what they want is to break the union.” (Newsday, July 6)

Con Ed is a very profitable company, with revenues over $13 billion and profits over $1 billion. Its CEO Kevin Burke made just a little less than $11 million last year and has a guaranteed pension of $18 million.

Since the company can’t outsource distributing electricity and gas, its chosen method to improve its profit margin is to destroy the unions that protect its workers.

Local 1-2 held a large rally at the Con Edison headquarters near Union Square July 5, with nearly 1,000 members and supporters. “I’ve never seen anything like this before,” said Paul Albano, a business agent for Local 1-2. “We’ve had supporters here from Occupy Wall Street, from the Transit Workers Union and the American Federation of Teachers.”

There were smaller demonstrations at Con Ed headquarters in Brooklyn and Queens. While concentrating on Con Ed’s main headquarters, the union has maintained picket lines in front of all three locations.

Major unions in New York — the United Federation of Teachers, the Hotel Trades Council and Service Employees 32-BJ — asked Gov. Andrew Cuomo to do what he could to get Con Edison, a state-regulated utility, to make an acceptable deal with Local 1-2. They also started a leaflet campaign to counteract Con Ed’s ads and to let the people of New York know that the members of Local 1-2 are ready to provide safe and reliable service.

The Egyptian Federation of Independent Trade Unions posted a statement July 7 in solidarity with the struggle of Con Edison workers. It reads in part: “The EFITU expresses its total solidarity with our American coworkers and comrades. It urges the [U.S.] government to exercise its role by preventing these dangers [brownouts and blackouts] and intervening in favor of just labor contracts preserving workers’ legal rights.

“The solidarity campaign within the [U.S.] labor movement with [UWUA] Local 1-2 is a source of joy and inspiration for EFITU. We join this campaign, as we consider that workers’ solidarity … is the way that allows workers to gain their rights against savage capitalism and multi-national companies.”