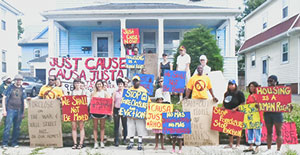 The Rhode Island Tenants and Homeowners Association and Rhode Island Peoples Assembly rallied at the home of Joann Manning in Providence on June 28 and July 7 to protest her family’s impending eviction by Midfirst Bank. Supporters say Manning’s family has been robbed of their home through foreclosure, but she wants her family to be able to stay in their home by paying rent. The bank owns the house and is trying to sell it for such an obscene amount that no one has purchased it, and it will sit vacant if the family gets evicted.