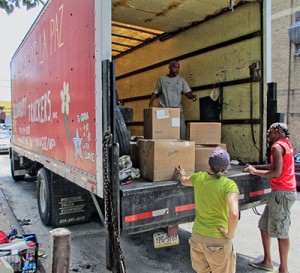 Volunteers outside a warehouse in Queens, N.Y.,
load a truck with materials bound for Cuba. WW photo: Anne Pruden

Following a struggle at the border crossing between British Colombia, Canada, and Washington state, the 23rd Pastors for Peace Friendshipment Caravan to Cuba is rolling through the U.S. It will cross from Texas into Mexico, arriving in Havana on July 21. On July 31, the participants will cross back into the U.S. — openly declaring their travel to Cuba without the required U.S. government approval.

On July 1, U.S. Customs at the West Coast Peace Arch border crossing stopped a Caravan truck full of humanitarian aid, diverting it to a parking lot at the commercial Pacific Truck border crossing. This shipment of aid included items such as medical supplies like wheelchairs, educational supplies and sports equipment, collected from cities and communities throughout the Canadian province of British Columbia.

The U.S. Customs officials targeted the sporting equipment for banning and demanded the purchase of a bond. But public outcry and a determined mobilization prevailed. On July 2, the truck crossed with soccer balls and baseball mitts, license – and bond-free. East coast crossings from Canada into the U.S. were uneventful.

Cuba is planning special events to welcome the travelers, including a tribute to IFCO founder and leader, the late Rev. Lucius Walker, whose ashes are kept at the Martin Luther King Center in Havana, and a 23-bus caravan that will circle through Havana, made up of some of the many school buses donated over the years.

The school bus has become a symbol of this persistent and courageous challenge to the 53-year U.S. economic and terror war against Cuba. In 1993, during the Second Friendshipment, U.S. Treasury officials seized a little yellow school bus on the Texas-Mexico border near Laredo. The 13 Caravanistas on board refused to leave the bus and turned the fenced compound into liberated territory. They began a hunger strike that lasted 23 days until the bus was released to travel on to Cuba.

The Friendshipment Caravan, which began in 1992, is the most extensive national outreach initiative challenging the U.S. blockade of the socialist island. Currently, it publicizes the unjust U.S. imprisonment of the Cuban 5 and defies the U.S. ban on its residents being able to freely travel to Cuba. The theme for the 2012 Caravan is Occupy Solidarity and it will celebrate Cuba’s commitment to sustainable development.