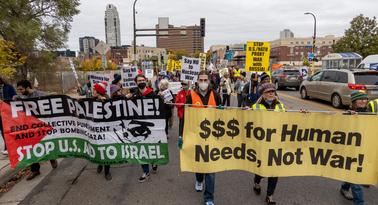 “The greatest purveyor of violence in the world: my own Government; I cannot be silent.” Dr. Martin Luther King Jr., April 4, 1967

With this quote, the United National Antiwar Coalition (UNAC) announced its call for coordinated actions in cities across the United States for the period of Jan. 13-22, the period around the holiday celebrating Dr. King’s life.

It is fitting that UNAC together with World Beyond War, Code Pink, Black Alliance for Peace and many others have called actions during that 10-day period, focusing on Dr. King’s contribution. UNAC’s call clarifies the role of U.S. imperialism, which since World War II “has initiated more than 60 military interventions in foreign countries.

“Today working people face escalating costs of food and energy, recession, growing insecurity and attacks on efforts to unionize. The continuing wars and military provocations have brought us to the brink of nuclear war.” (unacpeace.org)

Workers World appeals to all in the U.S. who want to stop the war in Ukraine to support the UNAC call and all the demonstrations called in that period. We call upon revolutionaries to bring to any such gathering a clear position that gives responsibility for the war drive to the U.S. and its imperialist allies in Western Europe, Japan and Australia.

These are the states and militaries that conquered much of the rest of the world in the 18th and 19th centuries and fought each other for domination in the first half of the 20th century, unleashing two murderous and mutually destructive world wars.

They targeted the working class’s attempt to build socialism from the first days of the 1917 Russian Revolution. Since the 1989-’91 counterrevolution, the U.S. and its allies, led by the Pentagon, have been trying to reconquer any parts of the Global South that had managed to win some measure of sovereignty.

Using NATO, an alliance of oppressor nations — disguising itself as “the free world,” Washington has since 1999 unleashed wars destroying Yugoslavia, Libya, Iraq and Afghanistan and wreaking havoc in Syria. Meanwhile it has armed the Saudi monarchy in its war against Yemen, and it has sewn chaos across Africa to plunder its natural resources. This warmakers’ alliance has fed its military-industrial complex with arms that greatly increase the killing of Russians and Ukrainians.

The antiwar movement should keep these facts up-front while mobilizing against the wars in Ukraine and in the Pacific. As revolutionaries have repeated since 1914, the main enemy is at home, and that’s the front where we have to take the fight. The next step in that struggle is to call a protest in your city, inform UNAC, and take to the streets to support other actions this January. (tinyurl.com/38wtdzz9)