This article was published in the Nov. 17 issue of Avante, the newspaper of the Portuguese Communist Party, giving a roundup of struggles in Europe by the workers, whose living standards have been reduced as they are forced to pay the costs of the pandemic and the U.S./NATO proxy war in Ukraine. Translation: John Catalinotto. 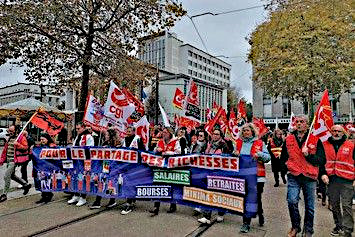 In European countries — from Belgium to Greece to France, Spain and Britain — workers are demonstrating in protest against rising prices, demanding fair wage increases and guaranteed rights.

In Belgium, from Antwerp to Liege, from Charleroi to Ghent, from Mons to Genk, the Belgian working class sent a clear message on Nov. 9 with a general strike to demand a wage increase and the freezing of energy prices.

Many sectors were affected by this day of strike action to defend workers’ purchasing power: metallurgy, distribution, chemicals, transport, logistics, education and day-care centers: Hundreds of members of the Belgian Labor Party and student movements were with the pickets, showing solidarity with the union members and supporting the workers’ demands.

In France, on Nov. 10 a national day of strikes and protests took place, called by the General Confederation of Labor (CGT) and other union coalitions, demanding wage increases in view of the loss of purchasing power of workers, retirees and pensioners. It was the third mobilization in less than a month, after the struggles of Oct. 18 and 27, in a context of galloping inflation, now more than 6%. The strike and demonstrations in Paris and in cities across the country affected sectors such as public transport, education, health and the post office.

The CGT is demanding, among other measures, an increase in the national minimum wage to 2,000 euros per month and the indexing of wages to inflation. And it rejects the change in the pension system that the government intends to implement, which includes increasing the retirement age.

In Spain, on Nov. 13 more than 600,000 people demonstrated in the capital in defense of the public health service and against the measures of “destruction” of the sector carried out by the right-wing government of Madrid. The demonstrators took to the streets to demand a public, universal and quality health service. They protested against the elimination of primary health care, against the long waiting times and against the precarious labor status of health professionals.

Thousands of doctors participated in the day of struggle to warn that they need more resources and to point out that the situation is at its limit, after “years of putting up with excessive pressure.”

In Greece, a 24-hour strike and demonstrations took place Nov. 9 in Athens and other cities to demand price control measures and wage increases. The actions were called by the most representative union confederations in the country, the General Confederation of Greek Workers and the All Workers Militant Front.

In the capital, thousands of people filled the streets of the city center and, waving placards and banners, denounced the policies of the right-wing government and the European Union that “generate poverty, hunger and inequality” and “leave people frozen while they warm up the profits of big business.”

In Britain, most London Underground stations closed on Nov. 10 due to the strike of its nearly 10,000 workers — the sixth strike in the sector in 2022. The most recent 24-hour strike was called by the Rail, Maritime and Transport Union following the failure of negotiations with the TfL [Transport for London] company, which is responsible for running the British capital’s train and bus service.

The union is demanding that the employer back down on plans to cut 700 jobs and change the pension scheme. And it is ready to continue the struggle until a fair solution to its demands is found.