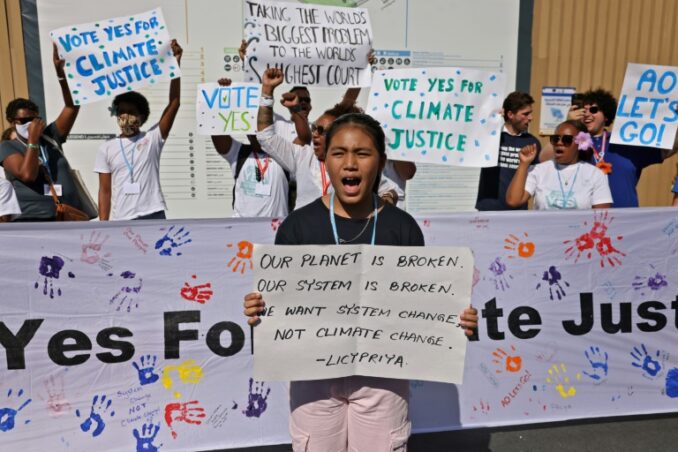 Sharm El-Sheikh is an exclusive, isolated Red Sea resort at the southern tip of the Sinai Peninsula. Its luxury hotels, convention centers, restaurants and spas are far from Cairo — one of the world’s largest cities with 20 million impoverished people — or any other large population center. Its artificial, air-conditioned environment is hardly an example of carbon neutral planning!

At this gathering, there have been grand speeches, projections, pleadings and dire warnings. But past climate meetings have broken promises to lower emissions and failed to deliver reparations to developing countries, which are on the front lines of the climate catastrophes of floods, landslides, famines, droughts and raging fires on a warming planet.

Here there were no firm commitments from the wealthy imperialist countries, the world’s biggest climate polluters, historically most responsible for global warming. COP27 is merely where world leaders and international organizations come to see and be seen. Expect nothing from their gaudy diversions in a burning world. In fact, many have condemned the gathering as a cynical display of “greenwashing.”

At this international conference, where carbon is the focus, every country knows the biggest polluter on the planet is the U.S. military. That’s the elephant in the room.

The 1992 Kyoto Accords committed states, 30 years ago, to reduce greenhouse gas emissions. But the U.S. demanded its military equipment and emissions — aircraft, naval fleets, 800 military bases around the world, training missions and drills, even if jointly held — be exempt from all climate calculations.

President Joe Biden — on his way to the Association of Southeast Asian Nations meeting in Cambodia and the G20 meeting in Indonesia — made a flyby visit to meet with Egyptian President Abdel Fattah el-Sisi. Biden made a vague promise of $11 billion in climate aid.

Less than $1 billion was actually allocated in the fiscal year 2022 U.S. Congressional budget. But more than $60 billion for the U.S./NATO proxy war in Ukraine was rammed through Congress this year.

U.S. military and political support for the dictatorship of former General, now President el-Sisi influenced the choice of Egypt as host country. The repressive military dictatorship in Egypt has conducted constant raids, roundups and torture of political opponents.

Up to 1,000 Egyptian people have been arrested in recent weeks. Journalists, lawyers and young people were targeted, according to Ahmed Attar, executive director of the Egyptian Network for Human Rights (ENHR). Egyptian police and military have blanketed the conference area. (middleeasteye.net, Nov. 8) Egyptians defying threats of torture and imprisonment are using the public arena of the international gathering to speak out against the brutal el-Sisi dictatorship.

Especially heroic are those Egyptians within the COP27 conference raising the name of political prisoner Alaa Abdel Fattah, who is on a water and food strike to challenge these dire conditions.

The demand for the release of more than 60,000 political prisoners — those estimated to have been jailed since el-Sisi overthrew Mohamed Morsi, the country’s first democratically elected president, in 2013 — has gained international attention because of the organized actions.

Egypt is the world’s largest importer of wheat; almost 70% of its population of more than 100 million are totally dependent on subsidies to feed their families. Bread riots and cuts in the national food subsidy have led to many past governmental upheavals, including the Arab Spring overturning of the Mubarak dictatorship in 2011, to uprisings in 2007 and 1977.

Egypt is the country that recorded a workers’ strike more than 3,000 years ago during the reign of Ramses 111 (1170 BCE), which was fueled by outrage over slow delivery of grain rations.

Now Egypt has agreed to tough austerity measures imposed by the International Monetary Fund. A devaluation of Egyptian currency to gain an emergency $3 billion IMF loan means that prices of electricity, basic commodities and food prices will soar. Millions who depend on food rations will be on the edge of starvation. How will they be helped by COP27, the latest climate crisis conference?

The overlapping struggles on the ground at the conference all confirm that struggles for human rights, workers rights, reparations and climate justice must be bound together.

That is what will build the strong bonds of international solidarity so needed for winning against the forces of global capitalism and its damages to the biosphere and climate. Another greenwashing megameeting won’t save the planet — or us who live here on Earth.