Over the Oct. 22-23 weekend, the U.S. Postal Service workforce learned that Postmaster General Louis DeJoy would be paying a visit to the 180 Napoleon Street postal facility here on Monday, Oct. 24. Special crews were hustled in to clean and spiff up the place to prepare for the boss’s sudden visit. The drafty warehouse is where 250 workers in six carrier stations come every morning to prepare the mail for delivery on the streets of San Francisco. 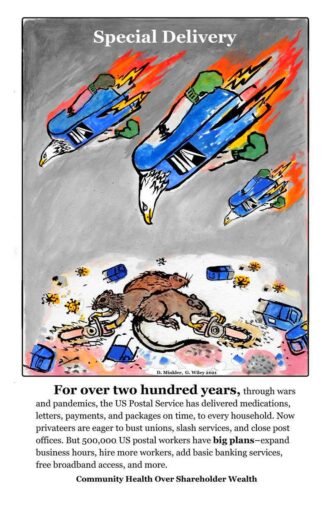 But three off-duty letter carriers surprised management by showing up at the building early Monday morning. There they passed out a leaflet with some urgent questions for their top boss, since he was coming all the way from Washington, D.C.

DeJoy was late, finally showing up at 2 p.m., five hours after he was scheduled to come — by which time all the carriers were out delivering their routes. A postal custodian, and member of the postal workers union, did get a chance to shake DeJoy’s hand, describing it as a “weak and hurried” handshake.

In a leaflet the letter carriers had, they asked Postmaster General DeJoy the following five questions:

1.Why are you deliberately delaying the mail??? Why did you reduce service standards, so people get their mail days late?

2.Why are you severely short-staffing post offices, so workers have long hours of mandatory overtime, day after day, with no time left for our families???

4.Why are you moving the work to centralized “sorting & delivery centers” — often far away from carriers’ delivery routes and far from their homes?

5.Why are you constantly harassing, micromanaging and bullying the postal workers? Is this a plan to destroy [U.S.] America’s popular and efficient national Postal Service — worsening conditions for the workers and delaying our mail? Is this all to set the stage for privatization of the USPS???