It was a perfect weather day at the Texas Capitol in Austin Oct. 22, for hundreds who participated in one march and two rallies against the racist anti-poor death penalty. In three emotional hours, love, solidarity, determination, anger, heartbreak and resilience filled the crisp autumn air as activists held the 23rd Annual Texas March and Rally to Abolish the Death Penalty. A carload of people came from the Rio Grande Valley near the Texas-Mexico border and others from nearby cities. 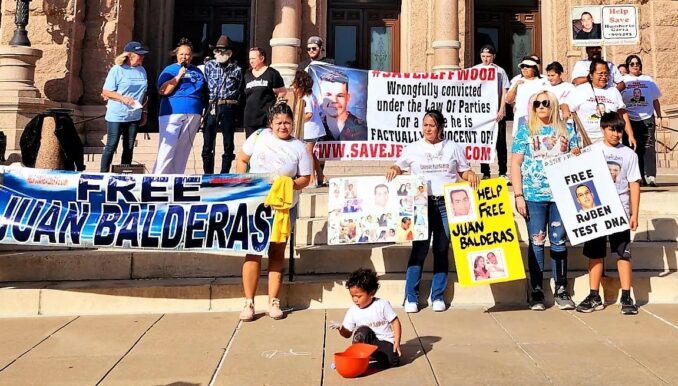 The Kids Against the Death Penalty led a loud and militant march around the capitol to the governor’s mansion and through downtown, totally disturbing the peace.

Austin’s progressive singer/songwriter Sara Hickman warmed up the crowd early on with her vocals. Seven-year-old Marilyn Santoyo thrilled everyone with an acapella version of Andra Day’s Grammy-nominated hit, “Rise Up.” It is an anthem of protest and empowerment that Marilyn sings outside the death house in Huntsville as an execution is taking place inside.

The voices of the mothers, brothers, sisters, spouses, cousins and children of people sentenced for execution painted a picture of the pervasive and cruel injustice of the death penalty, as they spoke in front of a state capitol built by incarcerated workers who were not paid.

Two speakers condemned the Texas “law of parties,” which sentences people to death even if they did not kill anyone — and in several cases when they were not even present when a killing took place. Lydia Garza represented her son Humberto Garza, convicted under this unfair law. Over a dozen family and friends were wearing their new T-shirts with Garza’s photo, which read “Free Humberto ‘Beto’ Garza, Victim of the Law of Parties.”

Terri Been, an event organizer, told how her brother, Jeff Wood, was not even in the store when a cashier was killed. Wood had no idea that his friend had a gun, when he drove him to a convenience store. Wood heard the gunshot, while sitting outside in his pickup. Yet Texas sentenced both men to die.

Been called the names of others convicted under this cruel law: Rudy Medrano, Juan Ramirez and Randy Halprin, who are still fighting, and Bobby Garza, who was executed in 2013.

Voices of those exonerated

Two men, who had been exonerated off death row, gave hope to the crowd. Ron Keine survived New Mexico’s death row, when the truth finally set him free. It took a minute to process the fact he gave, that over 190 people condemned to be executed have been exonerated in the U.S.

Alburt Burrell thanked everyone for coming out. After a Louisiana District Attorney broke the law by lying and hiding evidence, Burrell spent 14 years waiting for his freedom. Keine and Burrell both now work with Witness to Innocence, an organization founded to connect exonerated death row survivors with each other. Many have physical and mental challenges that were exacerbated by incarceration and death sentences.

Attorney Merel Pontier gave an update on Clinton Young, who had his death sentence overturned last year and is waiting to see if he will be retried. He was actually able to bond out of the county jail and is working until the court makes a decision.

As Nicie Gutierrez was beginning to speak about her spouse, Ruben Gutierrez, she got a phone call from him. She asked him if he would say a few words as she was at the mic. He hesitated for a brief moment, then he greeted the crowd. They responded to hearing his voice by chanting, “Test the DNA, Free Ruben Now!”

Other death row family members spoke, including Nadine Broxton, who came from Paris, France, to speak about her spouse, Eugene Broxton. He had just received good news from his attorney regarding his case.

Yancy Balderas spoke about Juan Ramirez, her spouse, saying that finally there are people working for his freedom. He has a new web page: FreeJuanBalderas.com. Juan’s mother, Victoria Reyes, stood by her daughter-in-law, holding a banner for her son, who has a clear case of innocence.

Rodrick Reed explained that his brother, Rodney Reed, had oral arguments before the U.S. Supreme Court last week regarding DNA testing on the murder weapon in his case. Texas says he filed for testing too late, but several of the justices indicated that the testing should be allowed. Rodrick’s five-year-old son, R.J., said into the mic, “Free my uncle! Free Rodney Reed!”

Delia Perez Meyer said that her brother Louis Perez sends his love to all in the fight. She called all the death row families up to the podium for a photo. The story of her love and constant support for her brother can be seen in the full-length film, “The Road to Livingston.”

Newly elected Texas State Representative Jolanda Jones drew cheers when she condemned Texas’ system of injustice. Jones has a long and militant history of confronting injustice and has overcome violence against her and her family to be a voice for the voiceless.

From the Piney Woods of East Texas, Jrmar Jefferson grew up without his father, who was unfairly convicted of a murder he didn’t commit. He has dedicated his life to correcting this injustice. His father, Delma Banks, spent over 30 years on death row; and just when he was going to be given a new trial, his incompetent lawyers urged him to take a plea deal in 2012.

Now his father won’t be eligible for parole until he’s 65 in 2024. Jefferson is running for U.S. Congress. so “working people will have a bold advocate in the U.S. capital.”

Saturday’s event ended as co-chair CJai Johnson-Foster sang “Happy Birthday” to her spouse, Kenneth Foster, who was hours away from execution in 2007 when his sentence was commuted to life. Then the crowd, led by Jefferson, sang “Happy Anniversary” to Yancy and Juan Balderas for their 19th year together.

The one disgusting interruption came when the capitol police threatened to arrest activist Terri Been, because a few young children were using chalk to write anti-death penalty words on a sidewalk. The kids had to take bottles of water to wash their work off before the fascistic police decided not to arrest her.

As things were winding down, people ate birthday and anniversary cake, signed letters to the six women on Texas death row, signed birthday greetings for Foster and signed petitions to end administrative lock-up, or ALU, a secret prison within a prison where Foster is housed at the Coffield Prison Unit.

The energy generated will continue as activists struggle to stop the two November Texas executions and the five already set for 2023.

The writer is a founding member of the Texas Death Penalty Abolition Movement. Mirinda Crissman, co-editor of the Tear Down the Walls prison page, also attended the Oct. 22 event.  Both are members of the Prisoners Solidarity Committee.