Oct. 2 — Launched with the cry, “We will no longer contribute to our own oppression,” thousands of incarcerated workers in the Alabama prison system began a massive strike Sept. 26 to protest brutal conditions, racist sentencing and exploitation of their labor. 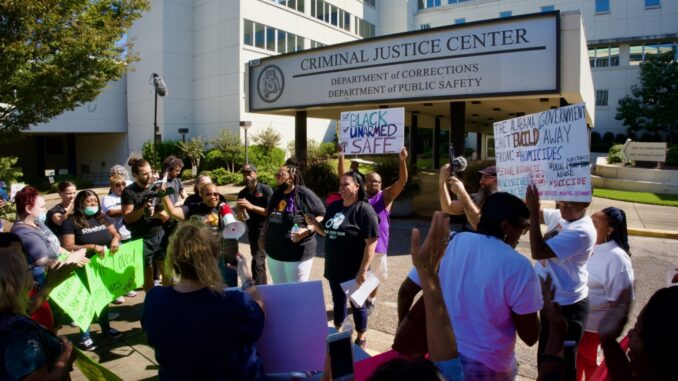 About 25,000 people are in the state’s 14 major prisons. They do all the labor of maintaining life in the facilities — cooking, cleaning, producing uniforms, doing repairs and equipment work.

Organizing for the strike began in June through the Free Alabama Movement (FAM), inside the walls, and the advocacy group Both Sides of the Wall. These groups estimated that about 80% of the people in Alabama prisons are on strike. (New York Times, Sept. 28)

On the first day of the strike, Both Sides of the Wall held a rally of former incarcerated people, family members and supporters at the Department of Corrections in the state capital, Montgomery. Speakers called for improvements in medical care and prison conditions and for reforms to sentencing and parole laws.

In a Sept. 28 press release, the Alabama Department of Corrections took the unusual step of confirming there was a “work stoppage” in most of the prisons. The ADOC statement broke with the usual denial of political action by prisoners and reinforced the likelihood that participation is widespread.

‘Day one breakfast at Bibb Correctional facility. This is [their] breaking tactic. Stay strong and persevere. This is the modern day “Pharaoh . . . Let My People Go.”’ (Photo Credit: @FREEALAMOVE)

In an attempt to break the strike, prison authorities have cut food to cold meals, twice a day, and brought in work-release prisoners from outside the prisons, forcing them to do food preparation. The state is also mounting riot squads, according to FAM posts:

“Day 5: As the historic Alabama prison strike winds down the final days of its first week, it seems pretty clear that the ADOC wants violence. Over the past 72 hours, ADOC has started calling riot teams into the prisons in full CERT [correctional emergency response team] uniform, even though the work strikes have accounted for the most peaceful periods of incarceration in Alabama’s troubled prisons.”

In 2020, the U.S. Department of Justice sued the state, alleging that conditions in men’s prisons violate the Constitution because of a failure to protect men from prisoner-on-prisoner violence, sexual abuse and excessive use of force by staff and failure to maintain safe conditions. The report found that Alabama’s major prisons were at 182% of capacity.

The nine demands issued by striking prisoners, through the Free Alabama Movement, address these issues and more, going to the heart of the racist and working-class injustice perpetrated by the state. (youtube.com/watch?v=E8_A2CLjiO4)

One important FAM demand is to “immediately repeal the habitual offender law.” This act punishes a prisoner who has three felony convictions, even if one or more are decades old or are for nonviolent offenses, with life in prison without parole. Of those punished with this horrendous penalty in Alabama, 75% are Black people. (alabamasmartjustice.org/reports/hfoa)

FAM demands include “mandatory parole criteria that will guarantee parole to all eligible persons who meet the criteria,” “a streamlined process for medical furloughs and review of elderly incarcerated individuals for immediate release” and “a return to earned good-time credit for all sentences.”

Other demands seek to repeal or amend laws to prevent racist bias in enforcement, such as presumptive sentencing, the “drive-by shooting” statute, or the 30-year minimum for parole for juvenile offenders.

The Alabama Board of Pardons and Paroles grants almost no pardons; at its Sept. 28 meeting, it heard 40 requests and granted only three. Alabama has had the highest state prison death rate due to COVID-19 in the U.S. (Brennan Center for Justice, Oct. 23, 2021)

Now Alabama plans to put $400 million — nearly 20% of its federal COVID-19 funding — toward the construction of two men’s megaprisons of 4,000 beds each. Gov. Kay Ivey made this decision after her Republican administration was thwarted by community, Black Lives Matter and abolitionist organizing from signing contracts with private prison companies.

In Alabama prisons today, forced labor, dehumanizing conditions and the disproportionate number of Black people are the continuation of enslavement under a different name. In letters from the inside, incarcerated organizers sign themselves as “Alabama’s slaves” and say that the strike is “in protest of the continued institution of neoslavery.” (tinyurl.com/2bk43x3a)

Alabama began leasing prisons to private businesses in 1842. With the emancipation of enslaved people in 1865, the state then began the “convict leasing system” designed to re-enslave Black people by criminalizing them and selling their labor.

This system has continued to this day in the state — and the U.S. — because it was legalized by the 13th Amendment in the U.S. Constitution. This still permits “slavery” or “involuntary servitude . . . as a punishment for crime whereof the party shall have been duly convicted.”

Alabama is one of only seven states that pay incarcerated people nothing at all for their labor, along with Arkansas, Florida, Georgia, Mississippi, South Carolina and Texas — all formerly states of the Confederacy.

But the state is home to a long history of Black-led resistance to any form of enslavement, from the unfulfilled 1864 uprising in Troy, named by Herbert Aptheker as the “last slave conspiracy” in the U.S., to the militant organizing by Alabama prisoners from 1969 through the late 1970s. (“American Negro Slave Revolts,” p. 367)

Conditions at Alabama prisons 50 years ago were the same as today: overcrowding, denial of basic needs such as clean drinking water and eating utensils, unchecked violence and extended periods of solitary confinement.

Prisoners organized at that time as Inmates for Action and engaged in work stoppages and strikes in Atmore and Holman prisons. IFA also led classes for prisoners on revolutionary theory and Black history. IFA leaders Chagina (George Dobbins), Yukeena (Tommy Dotson) and Frank X. Moore were killed in prison, and the Justice for the Atmore-Holman Brothers campaign fought to expose state complicity in their murder. (search.freedomarchive.org)

This lineage of resistance continues. In April 2014 members of the Free Alabama Movement went on strike to demand wages for the unpaid prison labor they did for the state, and they organized another strike in 2016. (“Alabama Prison Uprising, Workers World, March 24, 2016)

FAM’s “A Flicker Turns into a Flame” stated: “Mass incarceration, unconstitutional overcrowded prisons and inhumane treatment are more about economics than the humanity of people. . . . The numbers support our contention that ‘MONEY’ is the motive and most important factor in explaining the policies and conditions within the Department of Corrections.” (freealabamamovement.com)

Alabama incarcerated workers continue the struggle to end slavery and forced labor. They join with thousands of other Alabama workers — like the Brookwood United Mine Workers in their second strike year and the Bessemer Amazon workers still fighting for a union — and billions of other workers around the globe, fighting for liberation.

At night Pratt can see the lights from Alabama’s Bibb Correctional facility, located four miles west of where she lives in Centreville. The companies that profit from people trying to maintain contact with the over 1,800 people incarcerated there are: Access Secure Deposit, Access SecurePak, Securus Technologies and Union Supply Direct.