The New York/New Jersey Cuba Sí Coalition held its monthly action in Central Park July 31, near the statue of beloved Cuban liberation hero José Martí. Car caravans, marches and rallies are held on the last Sunday of every month here and in other cities around the world to demand an end to the U.S. blockade of Cuba. 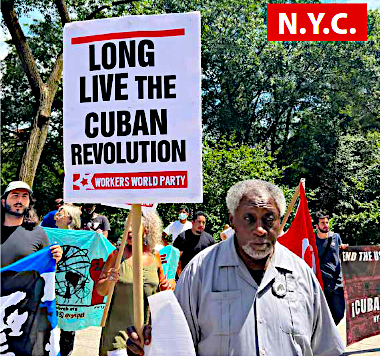 At least 10 organizations had speakers at the rally, including Brazilian, Colombian and Cuban activists. Larry Holmes spoke for Workers World Party.

In response to right-wing Cubans who threatened to attack the rally, the Coalition said, “The haters have vowed to sabotage the event. They are desperate. Every day more and more Cuban Americans, Americans and decent people around the world are calling for an end to the sanctions that punish the Cuban people. These extremists will not intimidate us.”

The right wing was outnumbered by Cuba solidarity activists 3 to 1. When the rightists tried to grab pro-Cuba signs, they failed.