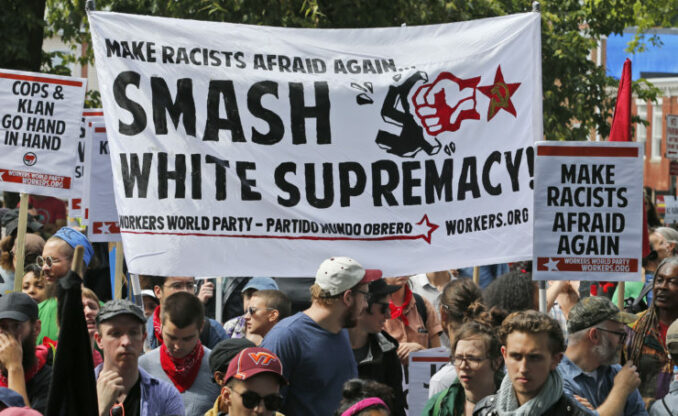 The horrific attacks on Black, Brown, Asian and Jewish people, trans youth, women and the gender-oppressed — from the massacres in the Tops market in the Black community in Buffalo, New York, May 14; at the Taiwanese church in Las Vegas, Nevada, May 15; at a Walmart in El Paso, Texas, in 2019; at a Pittsburgh synagogue in 2018, to the SCOTUS and right-wing attacks on abortion — do not occur within a political vacuum. They are tied to the current and long-term global economic crisis.

Marxists refer to repressive apparatus like the police, courts, prisons, or extralegal forces that promote and uphold class antagonisms and divisions, as the superstructure. The inner operation of the capitalist economy, be it a boom or a bust cycle, is the structure upon which policies are carried out to keep the majority working class powerless.

Sam Marcy, the late chairperson of Workers World Party, wrote an article June 8, 1995, entitled “Notes on the present economic and political period.” It serves as a guide on how revolutionaries should analyze any phenomena. Here is an excerpt:

“What is the nature of the present period? It can’t be analyzed on the basis of the current political situation. That is altogether inadequate. We have to look at the broader world economic situation in order to not only understand this period but be able to put into effect an appropriate political program.

“There is always a great temptation for Marxists to paint the current situation in terms of imminent economic or political collapse. But that is a poor guide for a mature political party, whose members seriously regard the party’s prognosis as a guide to action. The party’s political conclusions are derived from its economic analysis. This takes priority in considering not only broad political initiatives but more immediate, local ones.” (tinyurl.com/2p8w7asx)

Similar to the senseless 2015 killings of nine Black parishioners in Charleston, South Carolina, by white supremacist Dylann Roof, the massacre in Buffalo was not spontaneous but was well-planned for weeks and months, by another teenage white supremacist, Payton Gendron. He was influenced by the “great replacement theory,” a vile racist doctrine promoted during the 1930s by the Democratic Mississippi Senator Theodore Bilbo, who preached violence against interracial relations between Protestant whites and people of color, Jewish people, Italians, etc.

It should be taken note that heavily armed racists like Roof, Gendron and Kyle Rittenhouse, who killed two anti-racist white activists in Wisconsin in 2020, were peacefully brought into custody by the police; they were not fatally shot by police as Black and Brown people are in disproportionate numbers. These examples show how legal and extralegal forces work hand-in-hand.

Individual acts of domestic terrorism reflect the alienation of mainly white youth, whether racially motivated or not, who, consciously or unconsciously, see no future under capitalism. These youth can become more susceptible to a white-supremacist or fascistic ideology of violently and randomly targeting others for their woes, and not the capitalists. Instead of targeting the system that has poisoned them, they blame those they should be allied with.

The Occupy Movement in 2011, which sought to unite the majority of people against the richest 1%, was a direct, although short-lived, effort to address this alienation.

In response to a Ku Klux Klan march in Washington, D.C., in November 1982, Marcy wrote in his book, “The Klan and the Government,” on the root cause of this alienation, saying, “It is the symptomatic importance of the rise of the KKK and neo-Nazis, which is of greatest moment in apprehending the direction that events are surely taking. The Nazi-KKK menace in the U.S. is a symptom of a profoundly significant disease which has become congenital to the entire social system of capitalist exploitation and oppression.

“If the growth of the KKK and the Nazis were an isolated phenomenon divorced from the degenerative effects of monopoly capitalism, if these groups had no ties to and were not supported, encouraged and promoted by formidable sections of the ruling class, they would be merely a sterile and stagnant combination of racist thugs, even though they are oriented to prey upon growing unemployment, economic dislocation, skyrocketing prices and the cost of living. But that is not at all the case.

“The growth of fascism everywhere has been securely tied to big business; that is its lifeline. A case might be made for the liberal apologists’ view under the following conditions: if there were a prolonged softening of the class struggle rather than its growing acuteness on a world scale; if a swift and protracted economic recovery on a truly high level of production were in the wind; if an easing instead of an aggravation of international tensions were to come; if a sharp drop rather than a tremendous hike in swollen defense expenditures were really to take place in the immediate period ahead. Such conditional ‘ifs,’ however, are wholly unwarranted by the very grim realities of the present situation as it continues to develop.” (workers.org/marcy/klan/)

These words written 40 years ago are more profound today than ever before, regarding this unprecedented social crisis.

Racism and attacks on abortion

Ironically, the massacre of 10 Black people at Tops happened the same day an estimated 1 million people took to the streets around the U.S. May 14 to defend abortion rights. Coincidence or not, these two events are bound together by the same oppressive system.

White supremacy, along with the oppression of women and gender-nonconforming people, is the underlying driving force behind the current wave of anti-abortion bills, which disproportionately target poor women of color.

The leak of the SCOTUS draft ruling calling for overturning the right to access to abortion on a federal level will bring back states’ rights, reminiscent of the days of the pro-slavery Confederacy. Almost half the extreme misogynist, ultra-right wing-led state legislatures are criminalizing abortion to one degree or another. These are the same politicians who don’t give a damn about raising healthy children, as the baby formula crisis exposes.

The Democratic Party is attempting to co-opt protests expressing outrage over the assault on women and others who can become pregnant into votes for the midterm elections and away from class struggle. The repressive state is being put on notice for any “violent” protests, once SCOTUS makes its final ruling on abortion sometime this summer.

This relationship illustrates an important connection between all the struggles. White supremacy serves to keep the entire working class down by using divide-and-conquer ideology, like racism and patriarchy, to scapegoat the most oppressed in order to safeguard the fragile, out-of-control capitalist system.

When one section of our class is under siege by the ruling class and its repressive state, whether it’s Black and Brown lives in Buffalo, Charleston or El Paso, whether it is the right to abortion, defending trans youth in Florida, or the right to organize and not be retaliated against with firings of young workers at Starbucks and Amazon, the lack of a classwide response weakens the entire class. Every struggle, large and small, domestic or global, needs a classwide fight-back response.

Biden going to Buffalo to proclaim that white supremacy is a “poison” pays lip service to the crisis but offers no solution. Only a united fight for socialism can and will eventually overturn all class relations based on white supremacy to liberate our class, especially youth, from racism and all forms of capitalist exploitation.