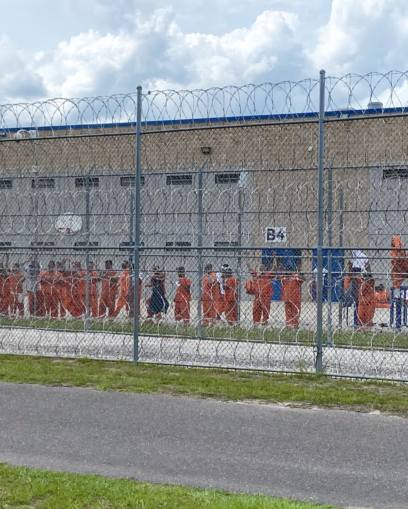 May 15 — Workers World reported on an April 16 solidarity demonstration that took place across the street from the exercise yard at Folkston ICE Detention Center, operated in Georgia by the for-profit GEO group. (workers.org, April 22)

By chance, a number of detainees were outside, just as the 50 or so immigrant rights activists marched up with their banners and signs calling for the closure of Folkston. Several detainees went to the fence of the exercise yard with fists up in welcome. For 90 minutes, they chanted and exchanged information with their supporters,

Detention officials have singled out three of the detainees for punishment for having engaged with the demonstrators. Their names are Allen Roberts, who suffers from asthma, Garsumo Dorley, who has PTSD, and a third Black man who remains anonymous. Each was given 32 days in solitary confinement. Garsumo, who asked to speak with his psychiatrist when the “extraction team” came to physically and brutally remove him from his cell, was given an additional 22 days for a total of 54 days.

The men spend 23 out of 24 hours alone in a windowless, concrete cell with nothing to read or look at. A bright fluorescent light is on from 6 a.m. to 11 p.m. every day. A heavy metal door reenforces the oppressive solitude. For only one hour are they individually taken to a metal cage in the exercise yard and left, usually in the hot south Georgia sun, until it is time to go back to their cells.

Garsumo, in particular, has been threatened by the guards and is so fearful that he is afraid to eat the food, worried about what they might have done to it.

The Coalition to Shut ICE Down in Georgia has launched a letter-writing campaign to gain these prisoners immediate release from solitary confinement, a form of torture.

Additional information can be found at bit.ly/StopFolkstonAbuse.