May Day 2022 marked a year when worker organizing crested in historic resurgence in the U.S.

The result? Workers walked off their jobs by the millions, sometimes in spontaneous unified actions. Like the Burger King workers in Lincoln, Nebraska, who made it public July 2021 on the fast food giant’s billboard: “We All Quit” — later citing long hours, low pay and 97 F kitchen temperatures.

Business media labeled this “The Great Resignation.” But what rapidly became clear was that workers were barreling into “The Great Unionization.”

A thousand United Mine Workers struck at their Brookwood, Alabama, coal mine on April 1, 2021 — putting them in direct confrontation with the mine’s financial backer, international hedge fund BlackRock. The miners — still on strike this May Day — are only 30 miles away from Bessemer, where a solidarity rally was held that February for Amazon workers beginning a historic union drive at the warehouse there with support from the Retail, Wholesale and Department Store Union (RWDSU).

Both of those were worker-led victories, crafted astutely by SWU and ALU — and that momentum is continuing. In a joint statement those unions called for all U.S. workers to come into the streets in worker solidarity and union activism: “MAY DAY! One working class united vs. union busters.” (Workers World, April 21)

Following are some May Day moments from the U.S. working class in militant motion. 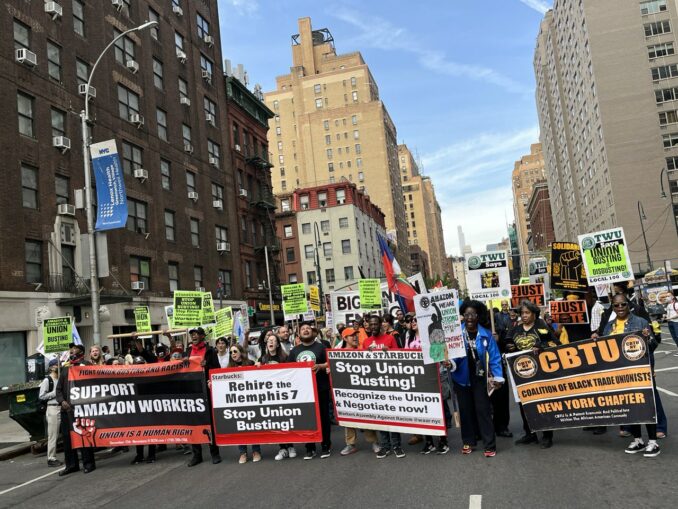 Marches then took to the streets, blocking traffic in all directions, and held a speak-out that included Brenda Stokely, International Working Women’s Day Coalition; Omowale Clay, December 12th Coalition; and Larry Holmes from WAAR. The march ended at Starbucks CEO Howard Schultz’s “mansion in the sky” — a penthouse at the former site of Saint Vincent Hospital’s Emergency Wing in the West Village. The hospital was torn down to build elite housing for the superrich. At this final stop, Sanchez and McGlawn used bats to break a piñata representing Schultz’s face — to the cheers of everyone. 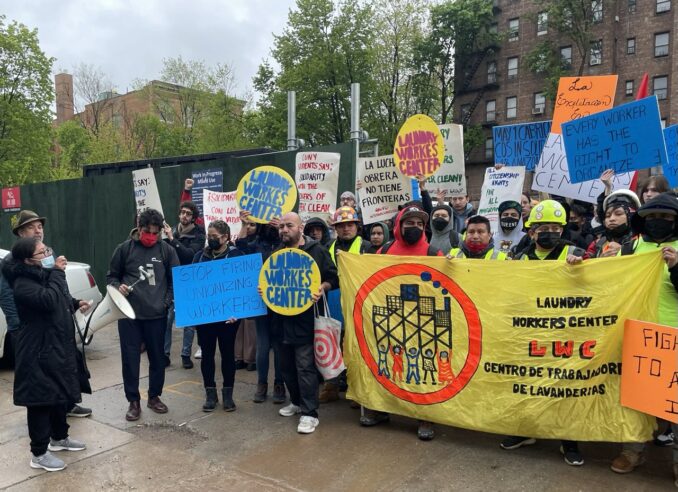 On May 2, migrant workers from the Laundry Workers Center along with supporters organized a 6:30 a.m. action at a Brooklyn construction site to demand safe working conditions. They formed a human chain surrounding the car of a construction manager who refused to accept a letter of demands from the workers.

Workers uniting in the East

The National Labor Relations Board reported that union election petitions were up 57% in the first half of the 2022 fiscal year compared with the year before — with Starbucks Workers United organizing which began at the Buffalo, New York, Elmwood store, driving a lot of the action. Starbucks union election petitions account for nearly a quarter of all petitions filed since this January! To celebrate on May 1, activists and organizers braved the rain and wind at Martin Luther King Jr. Park. Attendees were treated to a cookout, and many received free training in Narcan (Naloxone) treatment, courtesy of the WNY Mobile Overdose Prevention Services.

Philadelphia’s May Day rally, organized by the Workers Solidarity Network began outside the African American History Museum, across the street from a federal prison where incarcerated workers are held. Brice Patterson from Workers World Party opened by speaking of struggles faced by the working class and the need for a united fightback. Sterling Johnson and Darlene Foreman with Save UC Townhomes Coalition described their battle against gentrification. Blaise Laramee from the Tenants Union and Cindy Miller with Squirrel Hill Neighbors outlined the campaign for affordable housing in the city. 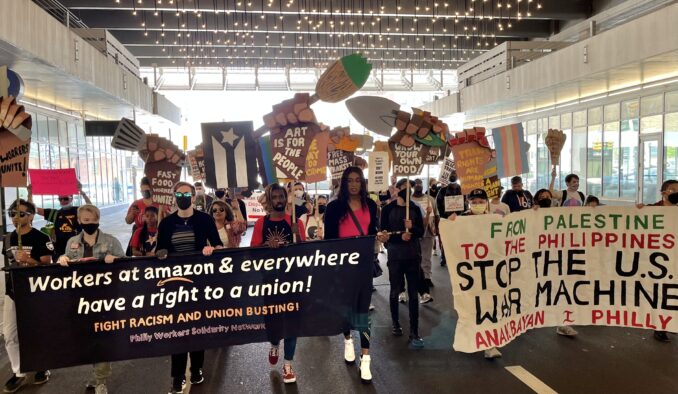 The fight to free political prisoners, including Mumia Abu Jamal, was motivated by Gabe Bryant from Mobilization4Mumia and Mike Africa with Love Not Phear. Jasmine Peake described the campaign to free local activist Ant Smith. The need to resist global imperialism was brought home by Palestinian activist Susan Abulhawa, Filipino activists from Anakbayan Philadelphia and Chris Velazquez from Veterans for Peace.

Then people marched behind a banner supporting the right to unionize by workers everywhere. Many held up large three-dimensional fists with words and symbols of struggle, created with support from Spiral Q. Joining a rally for undocumented and migrant workers’ rights, organized by the Movement of Immigrant Leaders Pennsylvania, Juntos and El Paro Philly, people then marched to Ninth and Washington Streets, after being led through the city by an energizing Indigenous Mexican dance troupe, Kalpulli Kamaxtle Xiuhcóatl.

A youthful, multinational crowd turned out for Cleveland’s May Day Workers Assembly and march. Speakers began the day at a plaza near the University Circle Starbucks, the fourth Cleveland-area store to file for a union election. Voting has already begun at the downtown store, the first to file. 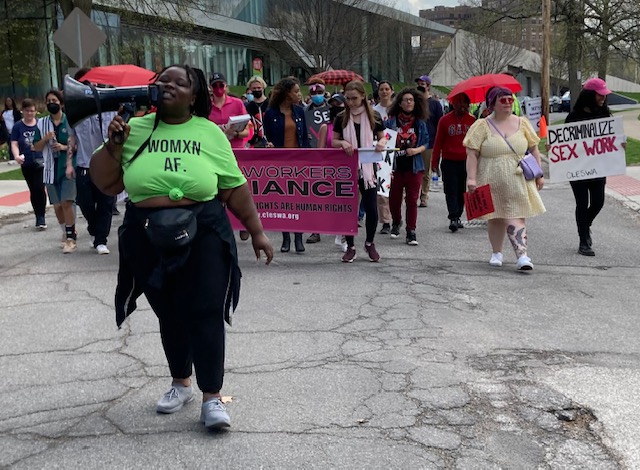 May Day Worker Power March in Durham, North Carolina, was endorsed by more than 20 local groups and advanced under the slogans “Power to the workers! Power to the tenants! Power to our community!” Marchers were joined by over 80 workers who were in town to attend the Southern Workers Assembly organizing school. These included Amazon workers from New Orleans, Atlanta, Kentucky and across North Carolina.

An organizers’ statement described the day as “a massive worker-led action to take back our community and demand: Stop the exploitation! Stop the union busting! Stop the gentrification!

“We have always been essential workers, but the global pandemic highlighted our critical role in society, yet we still don’t get the respect we deserve with dignified wages and safety. We demand collective bargaining rights for all workers!”

May Day in the Bay Area focused on local labor struggles and beyond, to raise up the efforts of Amazon, Starbucks and REI workers fighting for union recognition.

During a San Francisco march that retraced the footsteps of the 1934 general strike, sparked by the International Longshore and Warehouse Union, Trent Willis, past president of ILWU Local 10, said it was time to do more than “reenact” the general strike.

He spoke of the growing unity between teachers in the Oakland Education Association and the Longshore and Warehouse workers at the ports, joined in opposition to privatization and greed. He stated the time might be right to call for another general strike. Willis held up the example of the Oakland, California, one-day solidarity strike between teachers and longshore workers April 29. 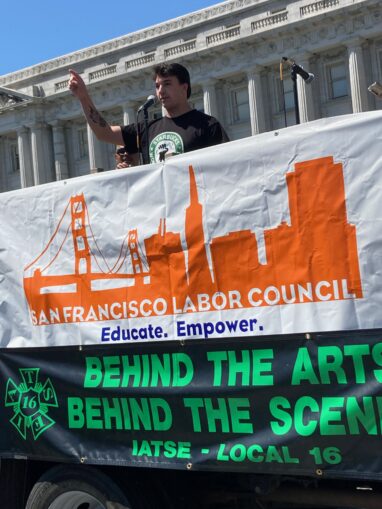 B.K. White, a striking Chevron worker and member of United Steelworkers Local 5, expressed solidarity with the Starbucks workers, teachers in Oakland and the ILWU. Workers at the Chevron refinery in Richmond, California, have been on strike since March 21 for a better contract.

An appeal to the labor movement to redouble efforts to free Mumia Abu-Jamal, Leonard Peltier and all political prisoners was given by Angela Davis — longtime activist, scholar and honorary member of ILWU Local 10.

In an action called by the Portland, Oregon, May Day Coalition, hundreds filled downtown with support for migrants and workers of the world. With proud banners and chants that echoed through the streets, people declared that they are sick of capitalist exploitation. Marchers went to Bancorp Tower to link up with Starbucks, Amazon and postal workers and then on to the Justice Center to support migrant and anti-imperialist struggles. 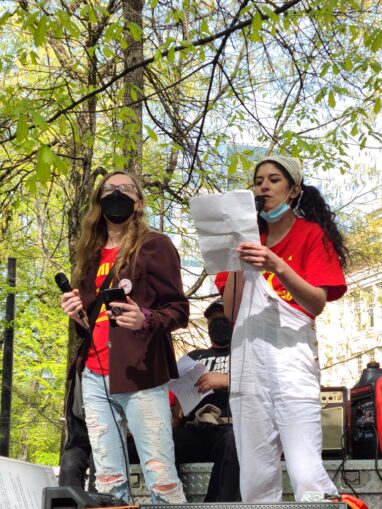 At the final stop at Portland State University, Maddi Johnson of Workers World Party gave a fiery speech on the need for radical organization: “Workers have all this power in our hands; we just have to use it. A first step is organizing and strengthening unions and forming Workers Assemblies — councils that unite workers across workplaces. Our strength is in our numbers, and every time we join together, that strength multiplies.

“The workers who march internationally on May Day know where we stand. We know what suffering the capitalist system guarantees — and we know what we must do to move beyond.”