Mass media in the United States and throughout the countries of Western Europe are exhaustively and intensely depicting the suffering of the Ukrainian people as Ukraine confronts the Russian army.

It is the U.S. and its NATO proxy who have now broadened the war being fought in Ukraine.

What the media is not covering is the impact of this war on the working and poor people inside Russia. 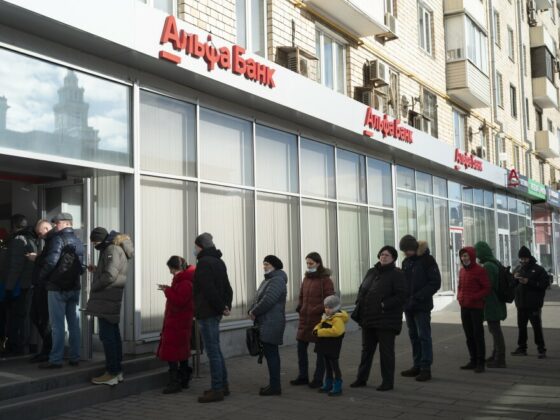 Workers at a Moscow bank attempt to gain access to their money tied up by U.S. sanctions, March 1.

In an alliance with the most economically powerful capitalist governments and their central banks, the U.S. has managed to cut the Russian economy off from many of the world’s financial arteries. According to the conservative weekly The Economist, “No major economy in the modern world has ever been hit so hard by such weapons.” (March 5)

Hundreds of billions of dollars in Russia’s central bank reserves were frozen by this capitalist consortium of banks. This has meant that Russia could not defend the value of its currency by buying rubles. Russia’s ruble lost 30% of its value over the weekend of Feb. 26-27.

Currently, the U.S. has imposed sanctions on over 10,000 people or firms, affecting over 50 countries making up 27% of the world’s GDP.

To say that the sanctions on Russia have had an unprecedented impact is clearly to define a catastrophic situation.

Big business Western media have spent a lot of time, screen minutes and ink asserting travel bans against Russia are only disrupting the luxurious vacations of the Russian ultrarich — the people they call oligarchs.

The capitalist media spend no time talking about ordinary working people who have had their lives disrupted catastrophically.

Since Russia imports substantial supplies of food, chemicals and machinery, the prices that workers in Russia now face — and have to pay to meet their daily needs — are going to spike. The world’s two largest shipping companies — Maersk and MSC — have suspended operations to and from Russia.

Google Pay, Apple Pay, Mastercard, Visa, Discover and Amex have all announced that they are suspending or restricting operations in Russia. Tens of thousands of people living in Russia — who use these cards to pay their bus and subway fares to get to work, school, pharmacies or supermarkets — could not do so starting Feb. 25, because the card companies were sanctioning Russia.

The jobs of tens of thousands of workers in Russia employed by foreign companies are in jeopardy. If they work, they must be paid, but their companies have no legal way to pay them. Some foreign-owned companies have put themselves up for sale, and others are abandoning their investments.

Canceling credit/debit cards, closing air spaces and imposing travel bans have meant that the 150,000 people who domicile in Russia but who were outside the country were likely without funds, unable even to pay their bills, at the time of sanctions. The 27,000 people in countries covered by air travel bans have an additional major worry — simply getting home. (NPR, March 2)

Inside Russia, even people from the U.S. and other countries who support the sanctions face being stranded and unable to leave. Given legal restrictions on financial transactions, whether they can pay their bills is questionable. The U.S. Embassy is advising U.S. citizens to leave immediately.

Sanctions cut both ways. The current sanctions against Russia have one big exception: Russia will be allowed payment for supplying Western Europe with 40% of its oil and gas. If this flow were sanctioned, oil prices, which have been volatile but trending higher due to war uncertainty, might go through the roof.

Russia then might do better selling less oil at higher prices on the spot market. Then again it might not. There’s a fog of war and a fog of sanctions.

Either way, workers in the U.S. and Europe involved in producing goods or services for Russia will lose. This loss won’t be tracked, because the governments involved want to pretend that the only cost of sanctions is on the nation that is sanctioned.

The tens of thousands of sanctions imposed by the U.S. cost many thousands of workers their jobs. In Russia, a cratering currency, short supplies and skyrocketing inflation point to life becoming much harder for ordinary working people.