Since early February, corporate media has extensively covered the controversial, right-wing “Freedom Convoy” of so-called “truckers” protesting vaccine mandates in Canada. Their two-week raucous and overtly racist encampment in Ottawa was finally disbanded by the state under Canada’s Emergencies Act. 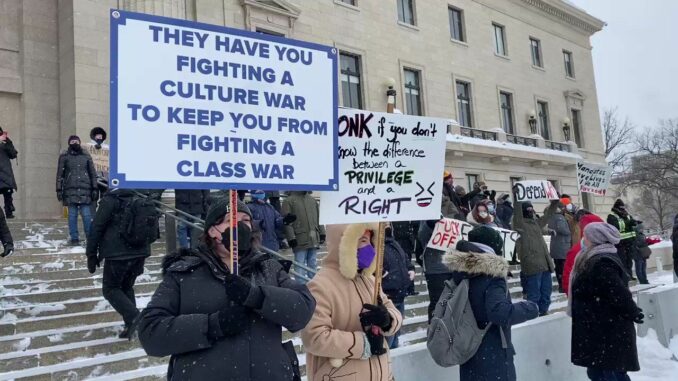 What corporate media barely covered, however, were the persistent counterdemonstrations in several major Canadian cities.

Workers World spoke with Canadian postal worker Basia Sokal, from Winnipeg, Manitoba, who brought the counterprotests to our attention during an international call of postal workers addressing the danger of post office privatization. Sokal reported that a National Day of Counter Protests was called Feb. 12, including a demonstration of over 2,000 people in Ottawa, Ontario, that outnumbered the “Freedom Convoy ” participants five-to-one.

Demonstrating in minus 38 C (minus 36.4 F) weather, the counterprotesters carried signs that read: “Truck off,” and “Make Ottawa boring again.”

Alex Silas, with the Public Service Alliance of Canada, stated, “This convoy does not represent working-class values. Truckers are right now delivering goods all over the country. They’re not in downtown Ottawa terrorizing our community.” (Ottawa Sun, Feb. 13)

On Feb. 12 a planned protest of the “Freedom Convoy” outside Kingston City Hall, near Toronto, Ontario, was confronted by over 100 counterdemonstrators with signs saying “End White Supremacy” and “Nazis F_k Off.”

Sokal also described the initial counterprotests that started as early as Feb. 3, with several spontaneous actions around Canada. In Ottawa an early morning counterprotest of around 30 people initially blocked a branch of the “Freedom Convoy” from joining the main occupation outside Parliament Feb. 3. By 9 a.m. they were joined by around 1,000 participants who kept up the action until late afternoon.

In Vancouver, British Columbia, trucks from the convoy were disrupted Feb. 5 by over 200 counterprotesters and cyclists, who blocked the trucks’ westward progress at several different intersections. Using their bikes, throwing nails on the road, throwing rocks and eggs at trucks and even laying their bodies down in front of the trucks, the counterprotesters rerouted the right-wing convoy away from hospitals and downtown Vancouver, forcing it to reverse course.

Vancouver counterprotesters made it clear that if the convoy returns, they will be there too. Other anti-convoy protests took place in Edmonton and Coutts, Alberta; Winnipeg; and other Canadian cities.

Referring to the “Freedom Convoy” as the “Flu Klux Klan,” Sokal raised that teachers, students and union members — including the Canadian Union of Postal Workers — across Canada were concerned about the fascist nature of the Ottawa occupation. “Their timing was interesting, because a lot of provinces had started to loosen mandates already. The Canadian trucking industry says that 90% to 95% of truckers are vaccinated. Maybe 200 truckers wanted to go to Ottawa to protest, but when they started to get Nazi and Confederate flags showing up, they did nothing to distance themselves. They should have shut it down, but instead they welcomed them.

“Many of the participants in the occupation were not actually truckers — they were truck owners, who commissioned others to drive for them. They focused on the vaccine mandate rather than on serious issues of road safety, lack of training and fatigue that truckers face.

“Real truckers are using this opportunity to speak out about problems working through the pandemic. Canada is a huge country with limited highway washrooms, places for truckers to get meals or even spaces to park their rigs by restaurants.”

Sokal criticized the government for failing to intervene when they could clearly see what was building in early February. “If this was a Black Lives Matter encampment or Indigenous land protectors, they would have arrested people long ago. Yet because it was predominantly white men who are bored, police did little to nothing, until the Emergencies Act was put in place. There was big money, big oil behind this and a lot of right-wing influence. What happened with Trump in the U.S. on Jan. 6, 2021, spilled over to Canada.”