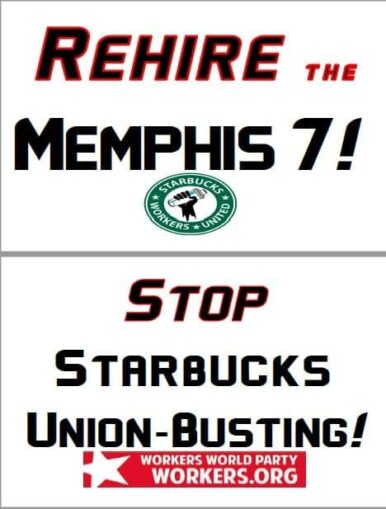 Starbucks Workers United has hit the milestone of 100 stores filing for a union election as of Feb. 19. Since September this explosion of worker power, unprecedented in recent years, went from three Buffalo, New York, stores to a countrywide movement. Two more stores in Cleveland just brought the count to a strong hundred across 26 states.

Following the first three Buffalo stores that voted in December, which resulted in two solid victories at the Elmwood Avenue and Genesee Street stores, three more Buffalo-area stores are up for a vote. Ballots were mailed to workers at stores in Amherst, Cheektowaga and Depew on Jan. 31, and votes must be sent in by Feb. 22. Votes will be counted on Feb. 23 at 1:00 p.m.

One of the stores, Walden/Anderson in Cheektowaga, was shut down for multiple weeks after the company became aware of widespread union support there. Starbucks claims it was closed for maintenance and that the closing was unrelated to the union drive.

With many workers losing hours and being forced to find new jobs and many new workers being brought in to replace them, it’s not very convincing when the company says it isn’t trying to quash union support.

Starbucks workers in Mesa, Arizona, were set to have their ballots counted

Feb. 16, but the National Labor Relations Board impounded the ballots and delayed the vote. The delay was due to a Starbucks request for the NLRB to review its decision to allow a single store to vote, rather than multiple stores. This is the same tactic used by the company against workers in Buffalo. It’s ultimately up to the workers if they want to file and vote one store at a time, but Starbucks has been arguing to have multiple stores vote so they can dilute the results.

The NLRB has already ruled in favor of the union in Buffalo on this issue, but Starbucks continues to bring it up as a delay tactic. “This is just a delayed victory,” said Buffalo Starbucks worker Michelle Eisen, who traveled to Mesa for the vote count. “They’re winning ballots, and we just need to be able to count them.”

Starbucks Roasteries in New York City and Seattle have also filed for a union. These massive stores, each with nearly 100 employees made up of food service and retail workers, are sort of a pet project of former Starbucks CEO Howard Schultz. He once referred to them as a “metaphor for the whole company.”

We can only hope Howard’s words are true and that all the company’s stores follow in the footsteps of these roasters and file for a union. Another Seattle store at 101 Broadway East is set to vote by mail starting Feb. 25.

Starbucks turns up heat against workers

In spite of the massive growth of a union campaign that shows no signs of slowing down, Starbucks has intensified its crackdown against union supporters across the country.

On Feb. 8, Starbucks carried out a racist mass-firing by terminating the entire organizing committee in Memphis, Tennessee, many of whom were Black and Brown workers. This came not long after the workers filed for a union, asking in a letter to the company: “Please, in memory of Dr. Martin Luther King Jr., do not bring your so-called ‘pro-partner’ anti-union campaign to Memphis.” Protesters have gathered outside the Memphis store, demanding an end to the union-busting campaign. Dr. King was assassinated while in Memphis to support a historic sanitation strike by unionized Black workers.

On Feb. 15, workers and community members in multiple cities mobilized in solidarity with the Memphis 7, demanding they be immediately rehired.

As of this writing Feb 20, Starbucks has fired Cassie Fleischer, a leading union organizer and worker at the Elmwood Ave. location in Buffalo. Fleischer helped that store become the first unionized corporate-owned Starbucks in the country. She is on the bargaining committee for the first contract at the Elmwood store, and she helped to organize a January strike, when Elmwood workers walked out over unsafe COVID-19 conditions.

Starbucks has cut the hours of many workers, especially since the union campaigns began, and Cassie Fleischer is one of millions of workers who doesn’t get enough regularly scheduled hours to make ends meet with only one job. Naturally she had to find a second job, as she described in a public Facebook post. When Fleischer changed her availability at Starbucks to accommodate her new job, the company told her that her only choices were to open her hours back up, or: “There was nowhere to go from here besides termination.”

Starbucks has built its entire hiring model on its part-time positions, catering to people with limited availability and bragging about flexible scheduling. It just doesn’t add up that Cassie Fleischer — a worker of five years — would be terminated for limited availability, except for the fact that she is such a passionate and powerful union supporter.

Fleischer says in her FB posts: “This further proves that we need a union in our stores. Starbucks is making a big mistake, and I will be spending this newfound time supporting my partners through the union in any way I can. … I will be fighting for reinstatement at Starbucks. Charges have been filed. I will not be taking this situation lightly. This is just the beginning!”

Workers World Party remains in solidarity with Cassie Fleischer, the Memphis 7 and every worker facing corporate repression and fighting to organize.