This article, originally published July 12, 2017, by Workers World, remains timely in January 2022 as the U.S. threatens war at the Russian border with Ukraine and ramps up China-baiting in an attempt to break up agreements being forged between nations seeking to remain independent of U.S. imperialism. See also “Russia’s demands challenge NATO’s threats,” Workers World, Jan. 5. 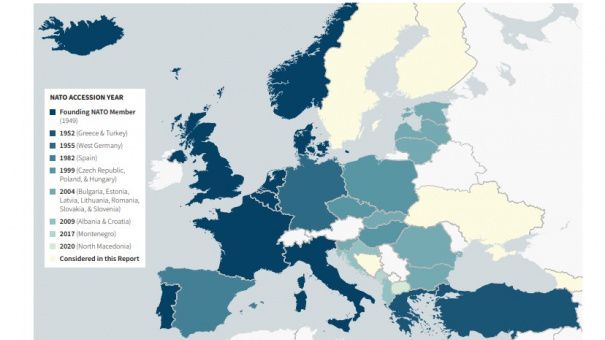 The corporate media’s constant use of Cold War terminology to describe the meeting of the U.S. and Russian presidents as a meeting of the “two superpowers” masks the present relationship of forces.

Old preconceptions and terms must be challenged in order to have an accurate view of the present international situation. Russia today, as a capitalist country, is not even a fifth-rate economic power.

The Russian economy is smaller than the economies of Brazil, South Korea or Canada. According to World Bank and International Monetary Fund measurements, Russia now ranks 12th globally in its gross domestic product. This measurement is the market value of goods and services.

Today’s Russian Federation is a vastly different state — socially, politically, economically and militarily — from the Union of Soviet Socialist Republics of even 27 years ago.

It is important to understand what Russia is today in order to understand the real intent of the constant Russia-baiting in the media.

In stockpiled nuclear weapons from the Cold War, the U.S. and the Russian Federation may have somewhat even nuclear firepower — more than enough to incinerate the world in one launch.

The Pentagon maintains more than 800 military bases around the world and 300,000 troops stationed outside the U.S. Russia has a naval base in Syria and a few communication centers in former Soviet Republics.

The U.S. Navy has 19 aircraft carriers, each of which includes jet aircraft, helicopters, destroyers and nuclear subs. Russia has one 27-year-old carrier propelled with oil-fired boilers rather than a nuclear reactor.

Russia is a target of U.S. imperialism because of its vast resources. Eighty percent of Russian exports abroad are now in raw materials, primarily gas and oil. The petroleum industry in Russia is one of the largest in the world. It is the largest exporter of natural gas. Coal, iron, aluminum, precious metals, lumber and cereals are other major exports.

There is an insatiable drive to control Russia’s great wealth by the largest banks and corporations. All currents of the U.S. and Western imperialist ruling class are desperate to have unlimited access to this great stream of profits, which they had finally laid their hands on just a few years ago. Remember: Imperialism’s very survival depends on expansion and profit.

Photo ops, handshakes and reports of cooperation at the G20 meeting do not change or lessen U.S. imperialism’s desperation to hammer down any form of resistance to its global domination. Any country attempting independent development is immediately targeted.

There is an irresolvable contradiction between the need of the majority of countries in the world to develop their productive forces and the need of Wall Street to maintain its place at the center of the world economy. However, Washington’s position is clearly slipping, despite daily military threats that assert its global dominance.

Privatization campaigns of the 1990s facilitated the transfer of significant Soviet-era wealth to a relatively small group of Russian business oligarchs. These pirates were willing to make the most corrupt deals with the West to maintain their stolen wealth.

As long as Russian politicians and privateers were totally compliant with the devastating looting of the country, they were showered with glowing media coverage. The Group of 7, the largest imperialist countries, invited Russia to join.

The problem for the new capitalist oligarchs is that when the Soviet state was overthrown, there was no room for a new capitalist power in the global economy. All the banks and multinational corporations aggressively moved in to take advantage of the chaos.

After the collapse of the Soviet Union, U.S. imperialism and the Western imperialist powers expected to have totally free rein to loot Russia at will. For almost 15 years they did have a free hand. The results in Russia were devastating.

Seumas Milne, a British journalist with the Guardian News, summarized Stephen F. Cohen’s book, “The Failed Crusade,” on this transition to a capitalist economy. Cohen is professor emeritus of Russian studies at New York University and Princeton University.

“In the most cataclysmic peacetime economic collapse of an industrial country in history . . . [u]nder the banner of reform and the guidance of American-prescribed shock therapy, perestroika became catastroika.

“By the late 1990s, national income had fallen by more than 50%. . . . The market experiment has produced more orphans than Russia’s [20 million-plus WWII] wartime casualties, while epidemics of cholera and typhus have re-emerged, millions of children suffer from malnutrition, and adult life expectancy has plunged.”

The 1990s was a downhill slide from “a centralized, publicly owned economy to . . . robber-baron capitalism. . . .

“For developing countries in particular, the destruction of the second superpower — which had championed the anti-colonial movement and later the third-world cause — largely closed off the scope for different alliances and sources of aid and sharply increased their dependence on the West.”

Into the economic chaos and social dislocation came not only Western bankers, stockbrokers, real estate schemers and speculators. Every major corporation, including Rockefeller, Ford and the Soros foundations, religious groups and the U.S. Agency for International Development lavishly funded nongovernmental organizations.

These NGOs set up staffs and funded schools, religious organizations and publications to promote capitalist values, Western “democracy” and civil society and to glorify competition and private property. They wrote property laws and textbooks and were thoroughly enamored with Western capitalism.

The Yale Center for the Study of Globalization reported: “There are at least 600,000 registered nongovernmental, noncommercial organizations operating in Russia” in 2005.

Forces in the Russian Duma, the elected assembly, began a nationwide government campaign against foreign-funded NGOs. In 2012 USAID was kicked out of Russia. The “foreign agent” law put 33% of Russia’s NGOs out of business in 2013.

In order to lock this violent and chaotic transformation in place, the U.S.-commanded military alliance, NATO, was expanded to include every East European country and former Soviet Republic, right up to the borders of Russia. In 2013-14 this untenable absorption came to a crisis over U.S. and German attempts to totally seize Ukraine.

During the years of violent transition to a capitalist economy, the Ukraine had still maintained deep economic ties and extensive trade with Russia, but it also had increasing ties to the European Union. The EU, however, would not settle for sharing Ukraine with Russia. A total break was demanded by the bankers.

U.S. and EU seizure of Ukraine

When Ukraine President Viktor Yanukovych was negotiating about Ukraine’s entrance into the EU, the EU refused to allow Ukraine to continue trading with Russia. It demanded that Ukraine join NATO. This meant that the Crimea, the home of Russia’s Black Sea Fleet and only warm-water port, would be handed over to NATO.

To carry out a coup against the elected Ukrainian government, the Euromaidan movement, led by neoliberals and fascists, received enormous Western support and funding. The reactionary movement seized the center of the capital, Kiev, and held it for three months. U.S. and West European media and politicians poured into the encampment with unanimous support.

Despite Russian and Ukrainian government efforts to negotiate and a Russian pledge of debt cancellation and new funds, the elected Ukraine government was labeled “corrupt” and overthrown by a fascist gang, which seized government buildings on Feb. 22, 2014.

Faced with the loss of its only warm-water port, Russia took control of the small peninsula and the Russian port in Crimea.

Fearing a wave of privatizations and quick industrial shutdowns that have come with every step of capitalist restructuring, the workers’ movement in Eastern Ukraine, the industrial heartland, seized factories and communication centers in self-defense against the fascist coup in Kiev.

The result was that Russia lost a major trading partner. Its sphere of economic relations became much smaller, and it faced an all-out effort at economic ­strangulation.

Economic sanctions imposed by the U.S. and EU at this time were specifically designed to hit Russia in its energy sector, where the country is most vulnerable.

Suddenly no U.S. oil company could do business with Russia, nor could any companies sell drilling technology to access oil and gas reserves. The sanctions restrict access to Western financial markets. U.S. banks cannot issue long-term loans to Russian businesses for energy-focused projects.

Russian state banks are now excluded from raising long-term loans in the EU. The U.S. also put sanctions on Russian banks, banning U.S. companies from receiving or loaning money to them.

All this was intended to force the new capitalists around Putin to break with his policies and to submit to a total takeover to protect their own profits.

Russia is now on the defensive, and since 2014 it’s been clear that the imperialists’ plan is total dismemberment. Strengthening the state sector under Putin and tightening controls on foreign-funded NGOs and on capital flight out of the country were a matter of economic survival.

The U.S.-led effort to overturn the government in Syria threatens to take another major trading partner away from Russia. Russia’s only naval facility on the Mediterranean is in Syria.

The appeal of the Syrian government to Russia for assistance, after four years of war, tens of thousands of mercenaries and funded extremist forces, and a year of U.S. and 10 other countries bombing Syria, has now led to daily confrontations.

There is a broad agreement that if U.S. plans succeed in overturning the government in Syria, following the overturns that have occurred in Iraq and Libya, then Russia and Iran are undeniably next on the list.

Russia’s assistance to Syria is of a defensive character. Self-defense is a critical link in the global axis of resistance, based not on ideology but necessity. Without Russian help, Syria would have fallen.

But with significant Western funding for development blocked, new avenues have opened. Russia is increasingly relying on China for loans, is now providing 60,000 tons of wheat per month to Venezuela and has canceled Cuba’s $30 billion Soviet-era debt.

The growing web of trade and economic relations among economic formations like BRICS (Brazil, Russia, India, China and South Africa), Shanghai Cooperation Organization, the Bolivarian Alliance for the Peoples of Our America (ALBA) and the Chinese One Belt One Road proposal are all signs of growing efforts among many targeted countries to fight isolation and resist imperialist dismemberment.

During discussion about global warming at the G20 meeting, it was the U.S. colossus that appeared increasingly isolated.

Military expenditures continually drain every needed social program in the U.S. But they are extremely profitable for the largest corporations, such as DynCorp International, Boeing, Lockheed Martin and Raytheon.

According to the World Health Organization, U.S. life expectancy, ranked 31st globally, is one of the lowest in developed countries. It is the same for basic education; at 38th, the United States ranks behind every major industrialized country.

The measures for infant mortality, maternity care, housing and infrastructure reflect the true cost at home of U.S. imperial­­ism’s determination to loot the world.