Early in the morning of Jan. 10, another group of Starbucks workers — called “partners” — filed for a union representation election with the National Labor Relations Board. A solid majority of the 20 employees at the West 6th store in downtown Cleveland signed cards to be represented by Workers United. 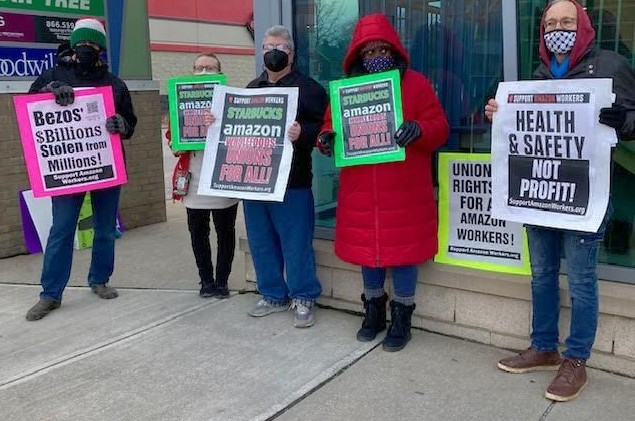 This is the first store in Ohio to seek unionization, joining the union drive that began with two successful elections in Buffalo and has spread to multiple cities across the U.S.

“We were keeping up with what’s going on in Buffalo,” morning shift supervisor Maddie VanHook told Workers World. “If they can do it, why can’t we?” Shift supervisors have additional responsibilities, such as opening the store and monitoring inventory, but they do not hire, fire or issue discipline. They are hourly workers and eligible for union membership.

A second issue is the five-day training period, which both trainers and trainees believe is too short. There is a great deal a new hire needs to learn, from Starbucks “philosophy” to all the recipes for the different drinks.

Pay and benefits, while better than some in the industry, are still inadequate and leave “partners struggling to make rent and pay bills.” They want better health insurance with mental health coverage and insist Starbucks live up to its claim of being in the forefront of providing good pay and benefits.

The potential bargaining unit is a diverse but tight-knit group, with a majority of women and ranging in age from 18 to 60+. Many were hired in summer 2021, but a few have worked at the store on and off for as long as seven years.

It took less than a week for union supporters to get 16 of the 20 workers to sign union authorization cards. They are now waiting to see if Starbucks will voluntarily recognize Workers United based on a “card check,” showing overwhelming support for the union, or deny recognition, forcing an NLRB election. The latter has been the company’s pattern so far.

“Workers United is proud to stand with Cleveland Starbucks partners, as they attempt to win a real seat at the table, safety on the job and economic justice,” said Mark Milko, Ohio state director for the Chicago and Midwest Regional Joint Board of Workers United, in a Jan. 10 press release, “Their fight is our fight, and we’ve got their backs.”

Support has been “overwhelming in the best way” according to VanHook. People are coming into the store, voicing support and asking to take pictures with pro-union partners. Solidarity from unions, such as the North Shore Federation of Labor and a utility workers union, “has also been very cool. . . . We didn’t expect it to blow up so fast.” There has already been widespread media coverage.

Clevelanders can show solidarity by coming in the store and ordering their coffee “union strong.” Inside and outside the city, supporters can call the company to express their opinions and “be ready to support us if things spiral” — i.e. if union-busting escalates. Some big Starbucks bosses are expected to visit the store in the near future to try to change workers’ minds through one-on-one conversations. Their success is doubtful.

Will the Cleveland Starbucks workers have to strike down-the-road for a good first contract? Maybe. As VanHook put it, “We’re preparing for the worst but hoping for the best.”