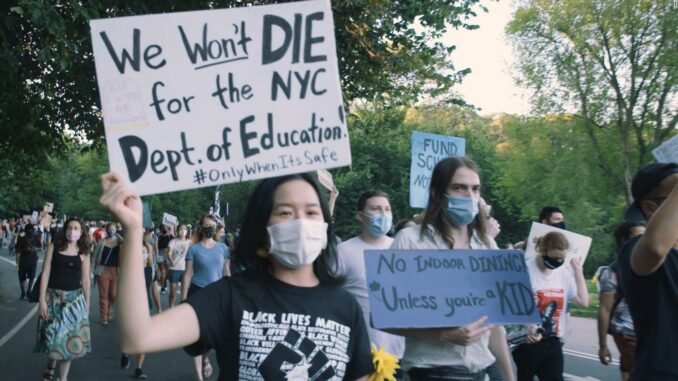 New York City teachers protest the reopening of schools in August 2020 under unsafe conditions during the COVID pandemic.

When the media is full of reports of thousands upon thousands of airline flight cancellations; of subway lines in New York suspended, along with Broadway shows; of professional sports games including football, basketball and hockey games postponed; and of restaurants cutting workers or going under and the economic impact to both businesses and customers, the situation is clear, and the losses can be calculated.

This hasn’t reached the level of economic catastrophe it did in 2020, but it is still very serious. Especially serious because hospitals, ambulance and EMT services and fire departments in various parts of the country don’t have enough workers.

Of course, the pain, the suffering, the deaths and long-term impairment of the workers involved are generally disregarded. The bourgeois politicians and their public health advisers, in managing the response to these problems, firmly insist that the generally available vaccines along with widespread testing will control this pandemic and allow the economy to recover and overcome the labor shortages that afflict their profit-driven system.

President Joe Biden’s speech Dec. 22 reflected his administration’s belief that COVID-19 is here to stay; it can be managed by “patriotically” getting vaccines, and the disruptions caused by social distancing and shutdowns aren’t necessary.

According to the CDC, as of Dec. 9 more than 7.1 million COVID-19 infections of children have been reported. (tinyurl.com/2bbt6brd)

One major issue Biden raised was his administration’s adoption of “test-to-stay,” which would allow kids who have been exposed to COVID-19 to come back to school, as long as they test negative. As he put it, “We can keep our K through 12 schools open, and that’s exactly what we should be doing.”

A number of school districts like Atlanta; Yonkers, New York; and Newark, New Jersey, as well as smaller districts in northern New Jersey; Prince Georges County, Maryland; Illinois; Connecticut; and New Mexico have gone to either all remote or hybrid instruction. The situation throughout the country is extremely fluid.

Eric Adams, the new mayor of New York City, has reaffirmed his predecessor’s decision to keep the largest school district in the country, with 1 million students, open for in-person learning. But serious issues with testing in the New York City school system have been raised.

At MS 839 in Brooklyn, according to the Dec. 27 Gothamist, 70% of the school was in partial quarantine, and there were nine confirmed cases. When the administration found out that the teachers were planning a sick-out day, they put the school on remote. Some teachers believed that students should only be allowed to return in person with a negative PCR test.

Many members of the United Federation of Teachers, which represents about 84,000 teachers and staff in the New York Department of Education, think their lives and health are at risk from COVID-19. On the television station NY1, Dec. 22, President Michael Mulgrew of the UFT said the testing system is “broken.” Only 180,000 students out of 1 million have agreed to be tested. No testing was done in roughly 180 schools in the two weeks before the holiday break.

A teacher at a large Manhattan high school, who interacts with the testing system frequently, told Workers World:

“From September 2021, the tests have been limited to unvaccinated students, and only 10% of those are tested.

“Furthermore only kids whose parents consented would be tested. These narrow requirements limited the amount of COVID-19 infections detected. In my school no COVID-19 has been detected from our testing. I feel limiting the amount detected was most likely the purpose of the system they established.

“With the current wave they have made two changes. They have upped the number tested to 20%, presumably of the total kids in the building, since the second change is testing vaccinated as well as unvaccinated students.

“Another issue is distancing requirements. Six feet was considered safe at the beginning of this pandemic but not possible in schools. Three feet distance became the compromise, but even that was more suggestion than enforced policy. The transmission rate of this variant seems to make distance a factor, a factor not being raised at this time.

“Finally, lunchrooms are not regulated like the restaurants of the city. This oversight is purposeful, as providing food is necessary but making them safe seems impossible.”

The basic problem with keeping the schools open — in-person learning for many reasons is the best way to teach — is that testing has to be coordinated with treatment and prevention. The omicron variant is so infectious that it can induce infections even in boosted vaccinated individuals. There are different types of tests, each with their own limitations and restrictions, each potentially providing different information.

The governor and the president and their officials can order 5 million, half a billion, any number of tests, but then these tests have to go to people, be distributed. People have to be instructed on how to use them, how to report the results. The teachers and the Parent Teachers Associations need to be involved in any decision-making around how schools respond to COVID-19.