Few people have done as much as Chuck Kaufman over so many years. He was an anchor in our movement. 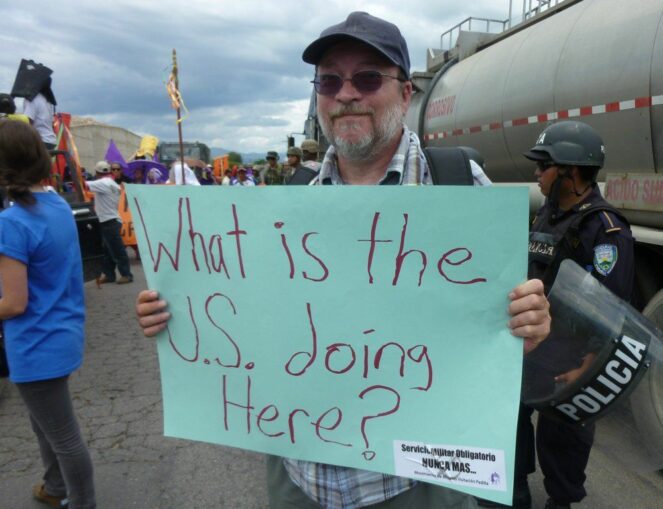 Chuck Kaufman in Honduras outside of the U.S. Palmerola Air Base in 2011. He and others were tear gassed on the two year anniversary of the U.S-backed coup.

In the more than 30 years that I knew Chuck, what I most valued was that he always looked for concrete ways he could help. No negativity, cynicism or backbiting. Chuck didn’t write big manifestos or give ultimatums. He helped on simple work plans. He fit very diverse, complicated people into tasks, where they would succeed.

Chuck excelled in projects that built revolutionary enthusiasm — like picking coffee, one bean at a time — hot, backbreaking, yet at the end of the day, measurable.

Working with Chuck in Washington, D.C., or when he came through New York, or at many conferences and events or visiting in Arizona, when he moved Alliance for Global Justice, and especially during these past two years in numerous zoom calls, he was a stabilizing force.

Chuck was a key part of the #SanctionsKill Campaign for the past two years; and despite traveling cross-country in his van, visiting family or in medical treatment, he was on most of the biweekly calls, even two weeks ago. Each time he took on at least one task — helping shape a webinar, publishing a report, a book — he made good suggestions on next steps.

Chuck’s early work focused on Nicaragua under full U.S. attack. But it kept expanding — to other countries targeted by U.S. imperialism; it included support for projects and participation in delegations to Cuba, Venezuela, El Salvador, Haiti, Honduras, then to China. At the same time, he was part of the militant border actions to defend migrants, always in solidarity with Palestine and in defense of the Black Lives Matter movement. He kept the big picture in the forefront, linking struggles, linking countries, linking people.

Chuck really went out of his way to help political activists whose projects and efforts were facing hard times. It was like throwing a lifeline.

We will miss you, Chuck.