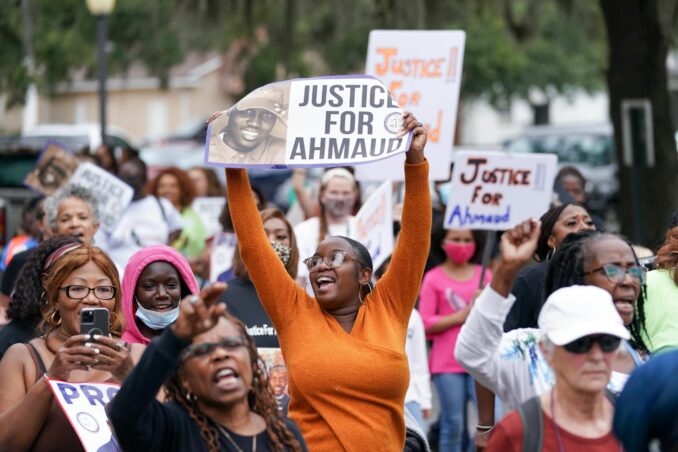 Some people have proclaimed “The system works!” about two recent court decisions against crimes by white supremacists. On Nov. 23 a Virginia jury lowered the boom with $23 million in fines on white-supremacist groups that organized the 2017 Charlottesville “Unite the Right” riot, which left one anti-racist protester, Heather Heyer, dead. In Brunswick, Georgia, on Nov. 24 a jury found three white racists guilty on almost every count in the murder of Amaud Arbery, who was Black.

These decisions are welcome and represent a moment of victory by progressive forces against racist violence. Undoubtedly the outpouring of millions in protest after the 2020 murder of George Floyd by cops resulted in heightened public understanding that racism continues to kill in the U.S.

But note that both of these decisions were levied against actions by white supremacists that were not state-authorized. Punished were vigilante actions by groups of white people steeped in racist ideology, acting as an armed group, without the explicit blessing of the capitalist state.

Conviction and punishments were won with the argument that these acts of white supremacy were “illegal” — that is, not directly authorized or approved by state power or law under the current U.S. system.

The U.S. capitalist system must cloak itself in a pretense of “fair” and “just” legality in order to maintain the fiction of “democracy.”

The acquittal of Kyle Rittenhouse exposes how state “legality” is used to maintain white supremacy. On Nov. 19 a Kenosha, Wisconsin, jury failed to convict Rittenhouse of his assault on a Black Lives Matter demonstration, where he killed two anti-racist white protesters and wounded a third. Before the attack, the Kenosha police welcomed this gun-toting white man, gave him water, thanked him and did not even arrest him after the killings. The cops clearly viewed him as “one of them” — giving their blessing to vigilantism in the service of a racist state bent on defeating protest against racism.

In the case of Ahmaud Arbery’s death, the local state structure at first implicitly endorsed his killers. Three consecutive county district attorneys either refused or delayed prosecuting the murder. (workers.org, May 12, 2020) Only a concerted campaign by Arbery’s family and supporters brought the case to trial, bolstered by the videotape of his murder. This must be seen in the context of hundreds of years of organizing by Black communities in the South against racist attacks by extralegal vigilante groups, both ad hoc or organized as the Klan.

Heroic progressive forces in the U.S. battle unendingly to try to save individual people from the death grip of a racist state. Those cases are sometimes won in fines, prison sentences, even death sentences against white supremacists — and sometimes won by the freeing of condemned people of color from prison or execution.

But none of these individual victories are enough to stop the unending racism that results in an act like that of Dylann Roof, who entered a church in Charleston, South Carolina, on June 17, 2015, and shot dead nine African-American people who were in Bible study.

It is not mere rhetoric to say that racism in the U.S. will only finally be ended by a struggle to overturn capitalism and institute a socialist system created by workers and oppressed peoples.

Capitalism is based on pitting all working and oppressed people against each other — from the workplace to the courtroom — so the owning class can continue a state system that guarantees control and profits for that class.

In the U.S. racism is a fundamental tool used by the owning class to set white workers against workers of color in bloody battles.

To “do the right thing” — to honor the power, wisdom, skill and glory in other workers under this present unjust system, we must fight racism tooth and nail.

To achieve the solidarity needed to effectively oppose the bosses under this present rotten system, we must fight racism every day — most especially white workers must fight!

But as long as capitalism rules in the U.S., racism will be employed by the ruling class to pit all workers and oppressed people against each other.

If we are to end racism forever in the U.S., we must fight racism — and fight to build socialism here.