On Nov. 19, Indian Prime Minister Narendra Modi, leader of the fascist Bharatiya Janata Party, declared that he would concede to protesting farmers’ demands to repeal three pro-capitalist farm laws. For over a year, farmers have engaged in coordinated acts of resistance across India. 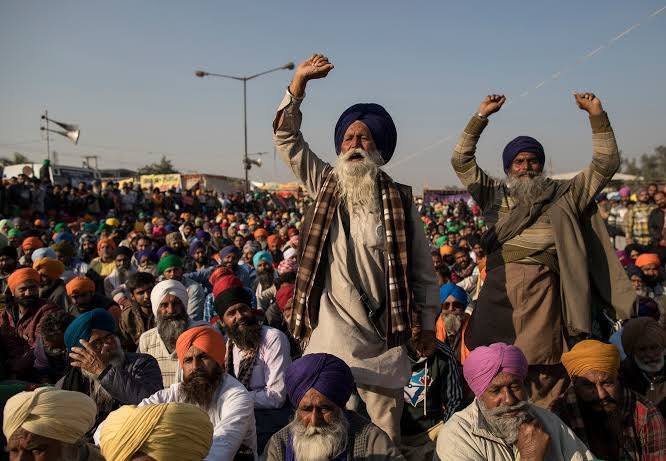 As reported in Workers World, farmers led the historic Jan. 26 protest on India’s Republic Day, called multiple “rail roko” actions on Feb. 11 and withstood brutal acts of state terror on Oct. 13. Those moments and countless others created the farmers’ movement.

Since Modi’s announcement, people have taken to the streets to celebrate this monumental victory. At the border towns of Tikri and Singhu, sites which protesting farmers have occupied since the start of their movement, farmers played instruments and danced to protest songs throughout the night Nov. 19. (tinyurl.com/apxx7h6y) In Canada and Britain, members of the South Asian diaspora also celebrated the farmers’ massive achievement on Nov. 20. (tinyurl.com/47ppyp5h)

While the Modi government’s statement that it will repeal the farm laws is a win for the people, the farmers’ struggle is far from over. They have received only verbal assurance from the prime minister. The government has yet to actually repeal the laws.

On Nov. 20, the 359th day of the farmers’ protest, Samyukt Kisan Morcha (SKM), an umbrella body of more than 40 farmers’ unions, issued a press release in response to Modi’s decision. The farmers state that Modi failed to address all their demands and did not acknowledge that more than 700 farmers have died since the start of the movement. Moreover, the Prime Minister did not address “[h]undreds of false cases in which thousands of farmers have been implicated in Haryana, Uttar Pradesh, Uttarakhand, Delhi, Chandigarh, Madhya Pradesh and elsewhere.”

The same day, Kisan Ekta Morcha, one of the farmers’ unions, reported that the Chief Minister of Telangana state, K. Chandrashekar Rao, had announced that the Telangana government would give three lakh (about $4,036) to the families of farmers’ protest martyrs. (tinyurl.com/5xedvtu3). The union stated that Modi has yet to offer any remedy for the sacrifices made by the martyrs.

On Nov. 21, SKM issued a letter to Prime Minister Modi stating their demands. (tinyurl.com/m4wz827e) SKM calls for the implementation of a Minimum Support Price on all agricultural produce. This would ensure that every farmer in the country receives a minimum profit for their harvest, even if the cost to grow the crop comes to more than the price listed on the open market.

SKM demands that all criminal cases targeting the protesting farmers be dismissed; and the group calls for compensation and support to the martyrs’ families for the martyrs’ sacrifice to their cause and for the Modi government to build a memorial in memory of the martyred farmers. SKM demands that the land at the Singhu border be used for the memorial.

SKM has stated that it will continue the struggle until all its demands are met. Farmers will hold a Mahapanchayat (a gathering of people from several villages) Nov. 22 in Lucknow to secure justice for the farmers who were murdered by state agents Oct. 3 in the Lakhimpur Kheri Massacre.

Nov. 26 marks the one-year anniversary of farmers’ protests at the Delhi borders. Throughout the country, SKM has called for protesters to commemorate the anniversary by participating in tractor rallies and bullock cart parades in capital cities. There will be a march to Parliament via tractor trolleys Nov. 29.

The farmers’ struggle continues, but they are not alone. Workers around the world are in deep solidarity with the protesting farmers, and the South Asian diaspora will continue to lend support. Black Panther Party Chair Fred Hampton, on Oct. 9, 1969, said: “Dare to struggle, you dare to win. Dare not to struggle, then you don’t deserve to win. We have to struggle properly.” (tinyurl.com/7966pc74)