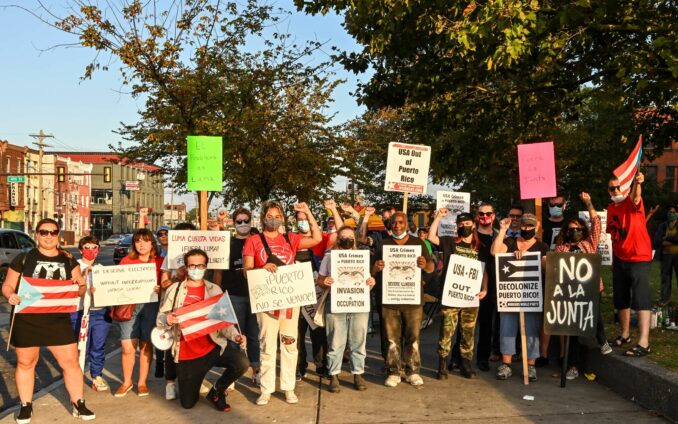 The protest was in solidarity with thousands of workers demonstrating at the same time in Puerto Rico to demand the ouster of Luma Energy, which privatized their energy system June 1. The company was given a 15-year contract to manage power distribution by Puerto Rico’s Electric Power Authority, PREPA.

Since Luma took over services, island residents have experienced widespread blackouts for extended periods.  While the outages are due in part to the breakdown of generation units lacking maintenance and repairs, Luma has exacerbated the problem by using selective blackouts that last for hours.  The lack of reliable electricity is impacting peoples’ health, work, and education.

The recurring blackouts leave people sweltering in the heat without fans for prolonged periods. Food is rotting from lack of refrigeration.  Voltage fluctuations are damaging computers and appliances. The protesters called on Luma to pay for their losses.

In Puerto Rico’s capital, San Juan, 4,000 protesters marched onto Las Americas Highway and shut it down Oct. 15. This same main highway was blocked by large demonstrations in 2019 that forced the resignation of the corrupt governor.

Puerto Rico’s power grid was severely damaged when Category 4 storm Hurricane Maria pummeled the island September 2017.  Repairs to the system have been slow, leaving many people dependent on noisy and polluting generators.

In addition to the privatization of the power grid, federal funds to repair the system have been delayed. The first disbursement of $7.1 million in federal funds for the reconstruction work was only announced Oct. 14.  The money is part of $9.5 billion obligated by the U.S. Federal Emergency Management Agency, (FEMA), to rebuild the grid.

Currently, more than 97% of electricity in Puerto Rico comes from expensive imported fossil fuels that negatively impact the environment. Puerto Rico passed laws to progressively increase the amount of its electricity generated from renewable sources to 40% by 2025, and 100% by 2050. However, FEMA, which controls the money to repair the power system, wants to fund two new fossil-fueled power plants.

Under the National Environmental Policy Act, FEMA was required to prepare a programmatic environmental assessment that looks at alternatives and invites public input.  FEMA’s narrow study only considered rebuilding the island’s fossil-fuel based energy system, made no mention of its climate impact, and made no effort to engage the public.

In the aftermath of Hurricane Maria, many communities turned to the use of solar panels to offset the lack of reliable energy.  In 2020, the U.S. National Renewable Energy Laboratory estimated that rooftop solar power could generate four times as much electricity as residents currently use. (FastCompany.com, Oct. 9)

PREPA and Luma both advocate reliance on fossil fuels and importing more natural gas.  None of their hundreds of projects proposed for using the federal funds include solar or other sustainable energy sources.

At the Philadelphia rally, organizer Fermin Morales, an electrical worker in the U.S., stated: “We stand in solidarity with electrical workers who oppose this unjust takeover by Luma.  Join us as we fight for more sustainable energy sources for Puerto Rico and an end to dirty fossil fuels and outdated electrical grids which harm our families and friends on the island.”