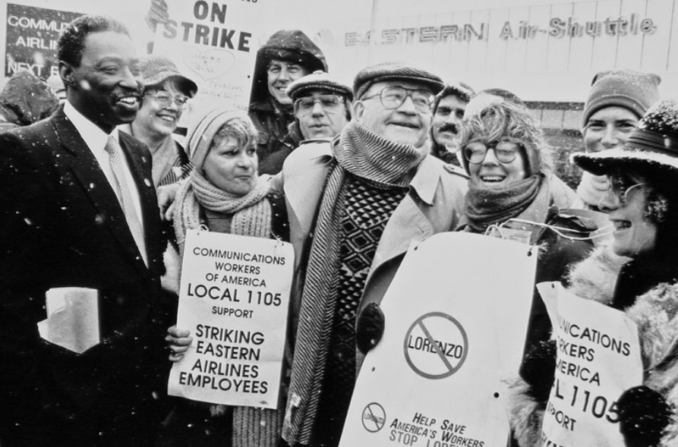 Ed Asner, center, at a rally in support of striking air traffic controllers.

On Aug. 29, Ed Asner passed away. To television watchers he is best known for his Emmy-winning performances as Lou Grant on The Mary Tyler Moore show and the spinoff, Lou Grant.

Serving as president of the Screen Actors Guild from 1981-1985, the legendary actor took a number of progressive positions. The Guild donated money to support families of striking air traffic controllers and withheld an award to former SAG president, U.S. President Ronald Reagan.

Asner was red-baited throughout his career because of his activism; he suspected this was the reason the popular, award-winning Lou Grant series was canceled in 1982. At the time he was fundraising for the Farabundo Martí  Liberation Front, which was fighting the U.S.-backed fascist dictatorship in El Salvador and providing medical relief to the population.

He opposed the U.S. war against Iraq, saying in 2002: “We do not sign on to these acts, such as a unilateral invasion of Iraq, and to the abrogation of civil liberties in this country to pursue these warlike acts by this administration.” (democracynow.org)

As current SAG-AFTRA President Gabrielle Carteris posted on the union’s website, “Asner fought passionately for his fellow actors, both before, during and after his SAG presidency. But his concern did not stop with performers. He fought for victims of poverty, violence, war, and legal and social injustice, both in the United States and around the globe.” (sagaftra.org)