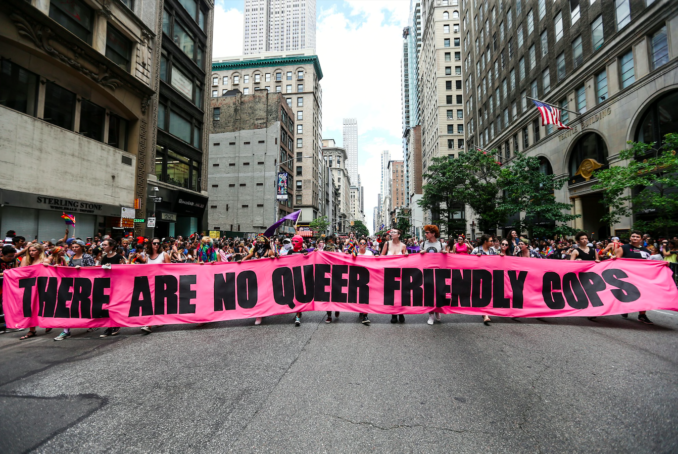 Charlette LeFevre and Philip Lipson, directors of the Capitol Hill Pride Festival (CHPF), announced in a press release issued May 21 that cops will be banned from their June 26-27 events this year. Trans Pride Seattle, which mobilizes a strong march, rally and festival every year, agrees with banning participation by the cops, which this organization has done since 2017.

While announcing the ban on police attending Pride events, the CHPF called on the Seattle Police Department to fire the six cops who traveled to the Jan. 6 Washington, D.C., racist invasion of the Capitol. On the issue of how the Pride Fest would be protected from far-right groups, LeFevre said it’s likely cops are aligned with some of them. The CHPF expressed support for the banning of cops at New York City Pride activities.

Elayne Wylie, producer of Trans Pride Seattle, as well as executive director of the Gender Justice League said, “We have produced something similar since 2017. We have limited the presence of SPD by enacting our own internal security measures.” She said that in 2019, “our team was able to prevent more than 150 incursions from that small group of [ultra-right] Proud Boys. I don’t think that the SPD could have done that . . . our community was very motivated.”

Year of protests vs. police terror

The decisions to bar police participation at Pride activities followed and were influenced by the year of demonstrations across the country against police violence after cops murdered George Floyd in Minneapolis May 25, 2020. Millions of people — in multinational, multigender marches — decried his and other racist police killings.

Last summer, the Capitol Hill Organized Protest took place in Seattle’s  LGBTQ2S+ community, with many of its members involved in the strong anti-police, anti-racist and anti-gentrification mobilization there. In the CHOP action, which lasted for over a month, demonstrators occupied a 6-square-block area around the police department’s East Precinct headquarters.

Continuous protests on their very doorsteps overwhelmed the cops and forced them to evacuate the building. This came after the police had used tear gas and other weapons against demonstrators.

On July 4, 2020, Summer Taylor, a nonbinary, anti-racist activist, was run over and killed during a Black Femme March against police violence on nearby Interstate 5 in Seattle. Another demonstrator, Diaz Love, was critically injured. The cops, who were supposed to be preventing traffic from entering the permitted freeway activity, did not prevent the high-speed vehicle from entering the highway.

Taylor and her anti-racist, pro-LGBTQ2S+ legacy will be long remembered. Ever since her death, Black Lives Matter marchers have organized their own car brigades to surround their demonstrations as they proceed down city streets. The cops usually follow them but stay far behind the protesters.

Seattle PrideFest, which draws several hundred thousand people, will be held virtually. Egan Orion, director of PrideFest, which has big-money corporate sponsors, expressed a desire to move away from police involvement. But the big banks and corporations supporting the event would oppose that.

However, LeFevre stresses, “We can’t trust any officer. Regarding the police, we’re done!”