The following edited remarks were made on an April 9 webinar entitled “The struggle continues — Next Steps for BAmazon Union and beyond — Organizer’s Meeting” organized by supportamazonworkers.org. Holmes is Workers World Party’s First Secretary and an organizer with the Workers Assembly Against Racism in New York City.

My heart, my solidarity goes out to the organizers and workers in Bessemer who fought so hard for this vote. The Retail, Wholesale and Department Store Union was outmatched and outgunned by this behemoth of a monster global capitalist corporation, Amazon. But still they did what, frankly, bigger unions should have done, who had more resources, infinitely more resources. The union took it on. But as comrade Saladin said, this is one battle; this is the beginning. 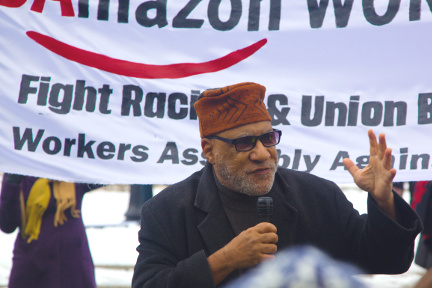 Most of us understood that we should not rely on 6,000 workers in Alabama to take on the biggest corporation in the world, a corporation that pretty much defines 21st-century global capitalism. It’s our crisis. Now labor must be challenged. This has to intensify a very necessary crisis inside the labor movement on all levels, not just the leadership, not just the Executive Council of the AFL-CIO, but most importantly at the rank-and-file level.

That’s why I agree with Saladin [Muhammad] about going around and having meetings to talk to workers on a rank-and-file basis about this. The questions must be posed: What is labor going to do about this now? What is the response going to be? The only true answer is this: The working class and its organizations — not only the biggest and most important at the moment because of its resources — the organized labor movement must come up with a plan to respond to this, to organize Amazon — not just Bessemer — which has a million workers in this country, not including Whole Foods, which they own.

How are the unions going to work together? What’s their strategy? What is their plan? Which unions are going to work together and not compete with each other? How are they going to win over the militants in groups like Amazonians United and Whole Foods United groups — like my good friend, Chris Smalls, the founder of the Congress of Essential Workers. They have a base in these Amazon and Whole Foods sites, and they feel alienated by the unions.

Unions are not who they run to, and they have good reasons for this; that — most of us agree on. But the problem is, the reality of the situation means that we must deal with the labor movement, because the labor movement has the resources, the infrastructure, the muscle and the power. And the workers and the militants that have been organizing Amazon and Whole Foods are brave, strong; they’re salting Amazon and Whole Foods, but they can’t do it by themselves.

It’s important for the unions — not to ignore them and not to dismiss them — but you’ve got to work with them and win them over. Another critical reality is the largest percentage of the working class is not in the union movement. But they must be told that even though they only order, if they can afford to, from Amazon, they’re important to the struggle.

That’s why some of the mass mobilizations that we helped to organize Feb. 20 and March 20, in solidarity with the union fight in Alabama, were important. Those actions helped push the labor movement, which on many levels was not even involved in Alabama, to get involved in it. What we are saying now is that a part of our reaction to what happened yesterday and today is the disclosure of this vote, which made our days more difficult; we have got to respond to that.

We want to throw out Sat., April 17. Some groups have already called actions before, that where we respond to, I would like those demonstrations to be in the thousands. But that’s not important. What’s important is that the left, that is seriously concerned about the working class and that is in this fight and not just observing it, has to find its voice.

And we have to try to get others to come with us and say: No. We’re going to demand an end to this union busting that Amazon is involved in, the multimillion-dollar union busting that they brought to bear on these workers in Alabama. No.

We’ve got to say that, while at the end of the day, the decisive struggle will be based on the workers in these workplaces. The whole working class has got to be mobilized to say we demand that Amazon and Whole Foods, and whatever other entities that have workers that it buys because it’s so rich, we have to demand that they accept the unionization of the workers.

The working class has to say that’s a very necessary complement to the workplace organizing. I want to just mention some strategies going forward which I hope that others will echo on, disagree with or add to.

A lot of us are organizing around the right-to-organize legislation known as the PRO Act, which is progressive, good and helpful. But it does not include recognizing card collection as the basis of an employer having to recognize a union. They still have to go the National Labor Relations Board route, which was a big problem in Alabama. We want “card check” that organizes collecting those cards, and once you have enough of them, that should be it.

The boss has to sit down and negotiate with you, end of story. That’s not in the PRO Act. We’ve got to demand [its inclusion] in the PRO Act. Also that bill is hung up in the Senate, which makes it easy for President Biden and others to say they’re for it, but basically do nothing about it. We’re trying to understand why Biden has got all these powers and said he’s like FDR, pro-labor, [but] waited until the middle of the campaign to say something, not at the beginning.

Why doesn’t he issue an executive order or series of executive orders that essentially puts the right to organize the PRO Act into law right away, including card check? We want to hear what people think about that and maybe organize a campaign around that to use that executive order.

We want to talk about the formation of workers assemblies. In the example and spirit of what the Southern Workers Assembly has done, we can learn a lot. Where the labor movement is weak in the South, the Assembly has filled the vacuum.

They have organized workers in states where it’s illegal to be in a union, where you can’t pay dues, but they’ve done it. They’ve got much to teach us. And the way the union movement is now, it’s not welcoming, except in the most rare instances, to migrant workers, to undocumented workers, to incarcerated workers, to sex workers who are trans workers, to gig workers, to Uber drivers. Who’s going to organize these assemblies?

These workers assemblies, organized on a local basis, attempt to both organize workers and support unions and struggles and solidarize themselves with ongoing workers’ struggles locally and internationally.

They are essential at this time to transforming the working-class movement and making it radical, making it inclusive and not exclusive. And it’s up to us. We can’t wait for somebody else to do it.

May Day 2021 is coming up. How can we make May Day, three weeks from tomorrow, meaningful to what happened in Alabama, to the right-to-organize legislation, to organizing the unorganized? Should we issue a national call for May Day actions or with some key issues that we recommend that activists around the country take up?

I want to speak to the need for left unity. In a lot of ways what we saw over the past two months in organizing the national days of solidarity with the workers in Alabama, was a kind of left unity. It wasn’t organized; it wasn’t groups that got together and talked to each other. But all of a sudden this group was doing it and that group and these groups that don’t work together, despite a lot of differences on big and small issues, not minimizing that.

But clearly for any of us who are serious, we can’t make any motion — we can’t do anything unless there’s some serious left unity. Our organizations alone are too small. If we just want to comment on stuff, if we want to criticize, which is necessary, that’s okay. But if we want to do something, if we want to actually do something that makes a difference to transforming our class, to organizing workers, to transforming the working-class movement, to changing what it is now to what it should be, we got to work together.

Different organizations, socialists and communists worked together in the 1930s. They did it from Minneapolis to Flint to everywhere — they did it. We’ve got to move in that spirit. The Democratic Socialists of America, by far the biggest left grouping and not a homogeneous group politically, even they are not big enough. And those of us in smaller groups, where we don’t have the size in certain areas, we have the experience to be helpful.

So as we move forward, let’s try to do what we did over the past two months. If we can do that, and we’re really serious, I don’t think there’s any end to what we can do. The main point — and I’m repeating myself — is that it’s one thing to have a meeting and sit aside and comment and criticize. And that’s important, especially if it educates and doesn’t demoralize views, or isn’t just cynical.

But we also have to be concerned about what we can do when we’ve worked together. And if we have to struggle over the kind of structures that we need for real left unity, let us do that. But let us do that honestly. And let us do that with revolutionary determination to have an impact on the future.