The Ever Given, a Panamanian-flagged, Taiwan-operated, Japanese-owned, German-managed, Indian-crewed Ultra Large Container Vessel (ULCV), blocked the Suez Canal in the early morning of March 23. Each day the canal is blocked costs $10 billion in international trade. 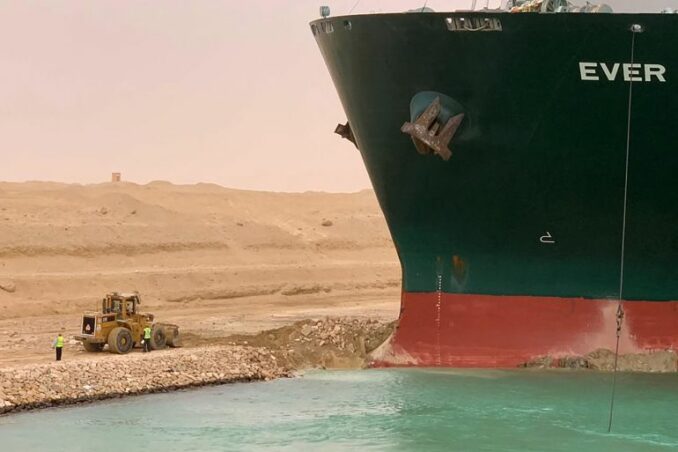 The Ever Given, aground in the Suez Canal, March 23.

The only alternative route between Europe (and the East Coast of the United States) and East Asia is around the Cape of Good Hope. That route is 15,000 miles longer and requires two weeks to a month extra travel time, depending on the speed of the vessel. As of March 27, 369 vessels were still waiting to go through the canal, including 13 carrying livestock, where the concern was providing food and water.

The crisis in the Suez, an artery through which over 15% of the world’s trade flows, has been major news, covered in the New York Times, BBC World News, Fox News, the Washington Post, USA Today, NBC News, The Guardian, Bloomberg, Splash 247, ABC News, Reuters, the Sydney Morning Dispatch, Le Monde and CNN and many other sources.

This level of coverage means the capitalists are stressing out.

ULCVs were developed on an enormous scale to save labor costs and increase profits. So to move all 18,000 of the 20-foot containers currently on the Ever Given by truck would require at least 18,000 truck drivers. To move them all by rail, a train would have to be 70 miles long.

After the ULCVs were developed, a whole infrastructure of ports and waterways had to be created because of their size — mostly with public money. For example, the Panama Canal, which uses locks, required extensive renovation work. Ship crews, tugboat crews, dock workers, crane operators — all needed retraining for this new class of vessels. While the costs were public, the profits were mainly private.

‘Bigger, better’ vs. the elements

The Ever Given is 1,312 feet long (about as long as the Empire State Building is high) and 194 feet wide. When fully loaded with containers, it weighs in at 240,000 tons. The top of the containers can be 150 feet (12 stories) above the water line. Bigger ships are under consideration!

Given the tremendous area of the Ever Given exposed to wind, even with skillful handling it is not surprising there was an accident when the wind was blowing hard and visibility was low.

In the March 27 gCaptain.com blog, Captain George Livingstone, who is a San Francisco bar pilot, says, “When incidents occur at sea, the focus will be on human error, even if there are underlying fundamental flaws in concept or design.” His post makes it clear that the development of these ULCVs was done without much regard to the crew, safety or making these vessels easier to operate. (tinyurl.com/eye6dd9d)

The Ever Given had a crew of only 25 people, and since running a ship is a 24-hour, seven day operation, only 8 to 12 crew members would handle the vessel at any one time. This is a “human error” accident waiting to happen.

The drive to reduce labor costs — which is a capitalist’s way of saying reduce the number of workers to a minimum while squeezing out maximum “productivity” — leads to catastrophic situations.

Meanwhile, the whole debate in the press over the blockade of the Suez Canal, raising the issues of “supply chains” and “just-in-time inventory,” reflects the bourgeois view that providing safety or producing “excess” inventory is a waste of money. Already the spot prices for petroleum products are gyrating, along with the prices of toilet paper and other essentials.

Now the wealthy are losing big money, but it is workers who are working long hours doing the dangerous job of unblocking the Suez Canal.