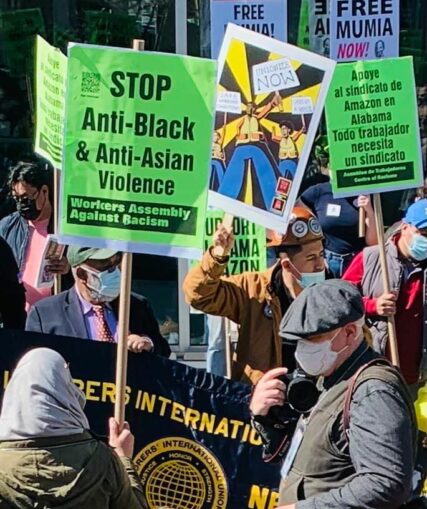 “Free Mumia” signs at the March 20 Harlem rally in solidarity with Amazon workers in Bessemer, Ala., organizing a union. WW PHOTO: Toni Arenstein

First filed in August 2016 and heard in a courtroom April 24, 2017, his appeal is based on the 2016 U.S. Supreme Court ruling, Williams v. Pennsylvania, which found due process was violated when former Pa. Supreme Court Justice Ronald Castille participated in the consideration of Williams’ appeal in a capital post conviction case.

As Philadelphia District Attorney, Castille had approved decisions to seek the death penalty. The SCOTUS ruling established that a petitioner is entitled to relief when a reasonable observer could conclude that a judge harbored disqualifying bias against the petitioner.

Their arguments once again raised the significance of the discovery of previously hidden evidence in the case, while challenging Krasner’s position that Abu-Jamal’s appeals were “untimely.”

Automatic bias and due process violation

In his long-delayed response to legal briefs filed on Abu-Jamal’s behalf in September 2019, Krasner is still denying Abu-Jamal’s right to prove his innocence. This supposedly progressive DA is arguing against new PCRA hearings that could expose evidence which previous prosecutors kept from the defense during Abu-Jamal’s 1982 trial and subsequent appeals.

In December 2018, Pennsylvania Common Pleas Court Judge Leon Tucker awarded Abu-Jamal the right to reopen his appeals, based on discovery of hidden prosecutorial evidence showing clear bias from Castille against Abu-Jamal and others charged with murdering police officers.

Castille was the Philadelphia DA during Abu-Jamal’s earliest PCRA hearings. He later refused to recuse himself from hearing Abu-Jamal’s appeals when they came before the higher court.

Tucker’s was a split decision. He did conclude that the U.S. Supreme Court 2016 decision in Williams v. Pennsylvania did not fully apply, since Castille, as Philadelphia district attorney, had not played a significant personal role in Abu-Jamal’s case before later denying his appeals while a judge.

However, summarizing the Williams ruling, Tucker wrote: “If a judge served as a prosecutor and then the judge, there is a finding of automatic bias and due process violation.”

Defense lawyer Judith Ritter said Tucker recognized the “need for a new appeal untainted by this bias.” (tinyurl.com/u6cfb76m)  His decision was a major break in the long legal struggle to free Abu-Jamal.

Within days of Tucker’s decision, and after both sides had rested their cases, Krasner announced that his staff had “discovered” six evidence boxes pertaining to Abu-Jamal’s case hidden in a remote storage area. Tucker granted Abu-Jamal’s attorney’s access to review the contents of these files. When they submitted four PCRA appeals challenging police, judicial and prosecutorial misconduct in Abu-Jamal’s earlier hearings, they also submitted a petition requesting a new Common Pleas Court hearing based on the uncovered evidence.

On Jan. 28, 2019, Krasner claimed Tucker’s “opinion has sweeping and, in our view, problematic implications for a large volume of cases, in addition to its effect on the case of Mumia Abu-Jamal.” His words sounded identical to the argument made by former Deputy DA Ronald Eisenberg, a Castille protégé, during the April 2017 opening hearing that granting Abu-Jamal’s appeal would “be a huge impact” on the higher courts. “At some point you just have to draw the line.”

In his latest filing, Krasner claimed that Abu-Jamal’s appeal was “not timely.” His arguments to dismiss the evidence cited by Abu-Jamal’s attorneys read like something out of Judge Albert Sabo’s playbook. Racist, pro-Fraternal Order of Police Sabo was both the judge in Abu-Jamal’s initial trial and again during his 1995 PCRA appeal. He was overheard by a court stenographer telling another jurist in her affidavit, “I’m gonna’ help them fry the n****r.”

Appeal based on new evidence of judicial bias

Abu-Jamal’s attorneys reaffirm that Tucker’s decision to grant his appeal was not based on Williams v. Pennsylvania, but rather “on newly discovered evidence of judicial bias that he could not have previously discovered with the exercise of due diligence — specifically a July 15, 1990, letter from then-DA Castille to then-Pennsylvania Governor Casey that was in the Commonwealth’s files and not previously available to Mr. Abu-Jamal.”

The brief further notes that the Commonwealth first disclosed this letter to Tucker, “perhaps inadvertently,” during the course of discovery on Oct. 2, 2017. The next day Tucker made Abu-Jamal’s attorneys aware of this evidence. On July 9, 2018, he granted them the right to amend his petition to include Castille’s letter. They raise that “an amendment to a pending and timely PCRA petition is not governed by the timeliness provisions of the PCRA.”

Their brief challenges Krasner’s assertions that the evidence found in the six hidden boxes was not significant. It disclosed Abu-Jamal’s 1982 trial counsel’s ineffectiveness in failing to present evidence that at the time of his testimony, the state’s key witness, taxi driver Robert Chobert was driving with a suspended license, and he was on probation for arson.

Without Chobert’s testimony, the Commonwealth only had the testimony of Cynthia White, whose presence on the scene was questioned by witness Yvette Williams, who claimed police pressured White to lie about Mumia.

Abu-Jamal’s attorneys have also filed a motion containing new evidence of constitutional violations, including promises by the prosecutor to pay or give leniency to two witnesses and new evidence of racial discrimination in jury selection.

Abu-Jamal’s appeal was delayed for nearly a year starting in February 2020 when the state Supreme Court accepted a rare King’s Bench Petition from Maureen Faulkner, widow of police officer Daniel Faulkner and a proxy for the FOP. It claimed Krasner was biased and sought to remove him from the case. The court ruled against her petition in December 2020.

She submitted a new request March 17 with the Pennsylvania Superior Court to intervene, again seeking Krasner’s removal and asking the court to “quash this appeal as untimely” and “for lack of jurisdiction.”

When Abu-Jamal was released from death row in December 2011, Faulkner, the FOP and then DA Seth Williams called for his death in the general population. Their hit job on Mumia must stop! Release him now!