Hundreds of thousands of Haitians took to the streets of Port-au-Prince Sunday, March 7, to demand the departure of President Jovenel Moïse, whose term of office has expired. The protesters raised the corruption under Moïse’s PHTK (Haitian Party of Tèt Kale), which has stolen or squandered billions of dollars of oil aid provided by Venezuela. 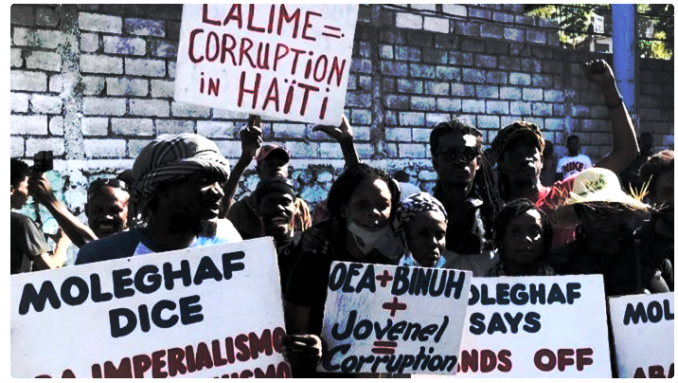 According to a leaflet posted online by organizers, there were at least six gathering locations for protests in Port-au-Prince. Tweets also came from other Haitian cities such as Cap-Haïtien, Jeremie and Gonaïves.

Another issue sharply raised at the protest was that the Haitian government has failed to confront the lawlessness of gangs who engage in massive kidnapping, often with the connivance of the cops. Health care workers took the lead on this because Dr. Ernst Paddy, a pediatrician, was killed Feb. 28 in front of his hospital as he and his family were being kidnapped. A few days later a nurse was kidnapped leaving a bank.

Haiti’s daily newspaper Le Novelliste is reporting that workers at the country’s second largest hospital have been on strike for two weeks because the electricity has been shut off, so that air conditioning doesn’t work. And the operating theater is dirty and unfit to use, so that effective care is severely hampered.

Medical workers assisted a contingent of visually impaired people in getting to the protest. One of them explained why he came, “I can’t see. But I can sense that this country is not functioning correctly.”

A number of youth marchers made a point of telling videographers that they were in solidarity with the struggle of youth in Senegal, a former colony of France. Five young people died there in early March, during protests against deepening poverty and lack of job prospects for young people.

The protests emphasize that Moïse would be gone rather quickly if the U.S. stopped supporting him. So far the U.S. is only urging Moïse to hold parliamentary elections to reduce some of the pressure on him.