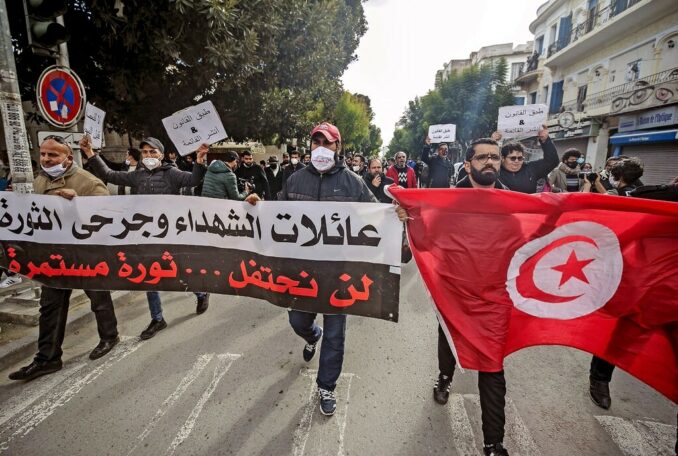 Ten years ago the Arab Spring — a vast mass movement that swept through the Arab world, shaking up all sorts of governments in Arab countries — began Dec. 18, 2010, after Mohamed Bouazizi, who sold fruit on the street, set himself on fire to protest his disrespectful treatment from Tunisian police.

His comrades on the street recorded the incident on their phones and posted on social media in Sidi Bouzid, a small city in the center of Tunisia. The video quickly went viral, and soon tens of thousands of Tunisians — men, women, youth — were in the streets, night after night, chanting for “liberty, dignity, jobs.”

Zine El Abidine Ben Ali, then the very corrupt president of Tunisia, fled to Saudi Arabia Jan. 14, 2011. That is the date the Tunisian government celebrates as the beginning of the Arab Spring, but the people of Tunisia regard the martyrdom of Bouazizi as its start.

In much of the Arab world, the Arab Spring has faded into memories of past struggles. Tahrir Square in Cairo, where hundreds of thousands of Egyptians gathered in protests for months, has been turned into a pharaonic showcase by the current al-Sisi government. But in Tunisia, where a functioning parliamentary system has taken root, it is still commemorated.

This past December there were big demonstrations in the smaller cities of southern and central Tunisia, according to video reports from Agence France Presse, putting forward the 2011 slogans “liberty, dignity, jobs.” This is the area of Tunisia where the Arab-Berber, Bedouin, Tunisians are concentrated. Southern Tunisia historically was a major terminus for trans-Saharan caravans.

The sister of Mohamed Bouazizi gave an interview to AFP explaining that people wanted more from the Arab Spring. The people certainly appreciated and used the “liberty” that was won during the Arab Spring. But wages are going down, and prices are up. It’s difficult to find a job even with a good degree. Life is becoming harder than it was under Ben Ali.

According to the International Monetary Fund, around 30% of Tunisians between the ages of 24 and 39 are unemployed, and Tunisia’s GDP declined by 11.5% in 2020. The demonstrations during December brought out whole families, some waving loaves of bread.

Tourism has been a big part of Tunisia’s economy. Tunisia has a long and colorful history from Classical times — when Rome was contesting Carthage over control of the western Mediterranean Sea — to the Ottoman occupation to present-day resistance. The ruins of Carthage are a short train ride from Tunis. The beautiful beaches, gorgeous scenery and excellent cuisine were a tourist draw.

Tunisia’s public health system was and is not prepared for the influx of cases. The government imposed a lockdown and arrested 400 people in March for violating rules, which many felt were arbitrary. COVID-19 is still a major problem.

When the government’s Arab Spring commemorations started in the middle of January, nocturnal protests broke out in almost every city and in some of the poor suburbs of Tunis, where people are piled together and COVID is rampant. Predominantly young people took to the streets, responding to the cops’ tear gas with fireworks.

The army was called out to control some of the cities — like Gafsa, where mining is a big part of the local economy.

Anywhere from 600 to 4,000 people — mainly youth — have been arrested, depending on accounts. One video clip from AFP shows a daylight confrontation between a protester and a cop. The cop pushes the protester, who pushes back, and then lets another protester defuse the situation.

The cops and the army have arrested many people who were merely participating in a demonstration. The Union Générale Tunisienne du Travail (Tunisian General Labour Union), which is the largest trade union confederation in Tunisia, has called for their release.