Dec. 17 — Under the banner “From Balloons to Bullhorns,” an angry group of protesters converged on the steps of the California Department of Corrections and Rehabilitation to demand mass releases of incarcerated people due to the COVID-19 epidemic. The vigil and rally organized by Sistas With Voices began with 104 seconds of silence to symbolize the 104 prisoners who have already died inside California state prisons from COVID-19. 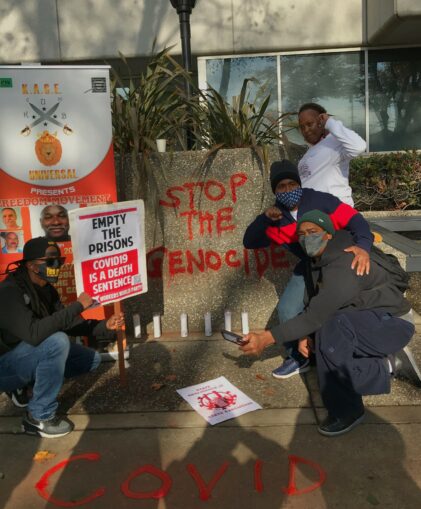 Protesters gather in front of the California Department of Corrections at the end of the rally. Credit: Judy Greenspan

According to the latest reports from the CDC(r), there are 8,800 reported cases of COVID-19 among a prison population of 91,000. More than 3,000 guards and other prison staff — the most probable source of the COVID-19 infection — have also tested positive. (Huffington Post, Dec. 18)

Despite a recent state appeals court ruling ordering that the population of the San Quentin prison be cut in half, Governor Gavin Newsom, a Democrat, has done little to ensure that the most vulnerable of the incarcerated, the elderly and immunocompromised, are released. (tinyurl.com/ydyv2mwj) Up until last week, the CDC(r) was still ordering transfers of incarcerated people from one prison to another, and subsequently the virus has been spreading. The legal group which has been meeting with CDC(r) officials and monitoring the outbreak at San Quentin confirms that most prison transfers have been put on hold.

Families and activists speak out

Today’s demonstration became a speak-out led by family members of people inside, formerly incarcerated activists, prisoner’s rights advocates and abolitionists. Elsie Lee, of Sistas With Voices, opened the rally stating: “We are demanding that CDC(r) do releases. CDC(r) has identified approximately 6,000 individuals who can be safely released back to society, and yet today, they have only released 44 of those individuals.”

Speaker after speaker called out a prison system that has yet to release any large numbers of elderly and immunocompromised. Lee said that the monthly numbers of releases during COVID-19 are the same as the monthly releases before COVID-19. She led the chant: “CDC you lie, you don’t care if prisoners die.”

Courtney Morris of No Justice Under Capitalism, a Bay Area anti-prison coalition, charged that daily endangerment of prisoners with COVID-19 “is intentional.” She asked, “Why else are they transferring people? Why else are they denying single cells or the ability to social distance?” Morris said that the prison system will fight “tooth and nail to deny releases,” She urged everyone to get involved to stop the transfers once and for all and to win mass releases of people inside.

This writer, representing the Prisoners’ Solidarity Committee of Workers World Party, spoke about the need to not only fight for mass releases under COVID-19, but to work toward the abolition of the prison system in this country. People in the crowd eagerly took up the chant: “Brick by brick, wall by wall; now’s the time to free them all!”

The stepson of a man incarcerated in a California state prison said it clearly, “Especially during this pandemic, no matter what kind of case your family member had or did back in the day, they need to get out. The best thing for everyone here is to have their family members at home.”

As the rally drew to a close, several activists using chalk spray paint wrote “CDC Guilty of Genocide” and “Free Them All” on the sidewalks and windows of the building. The police grabbed one of the activists, but later released her without charges. Protesters vowed to continue their campaign against prison transfers and for mass releases.

This writer, along with prison abolitionists and formerly incarcerated activists does not recognize the R which was belatedly added to its original name and bears no relationship to the inhumane and punitive prison system.

As this story went to print the number of prisoners infected with COVID has jumped to over 11,000 with more than 113 deaths.