Rodney Reed’s family and supporters had a press conference and rallied outside the Bastrop County Courthouse, with its Confederate monuments 25 yards away on the lawn. Reed was railroaded to death row inside the courthouse in 1998 by Bastrop County’s historically racist injustice system. 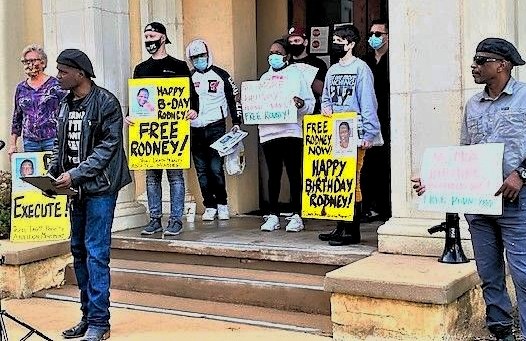 Rodrick Reed, speaking to the media.

On Dec. 19, three days before Reed’s 53rd birthday, a crowd gathered to wish him a Happy Birthday and to let him know that they are fighting for him until he is home with his family.

When a reporter asked what people need to know about his brother’s case, Rodrick Reed replied, “It is a fact that four or five medical examiners who have examined all the evidence found that it is medically and scientifically impossible for my brother to have committed this murder. This same evidence gives a time of death that puts the victim, Stacey Stites, in her apartment with Jimmy Fennel, her fiancée. If we can get a new trial, with the expert help of lawyers with the Innocence Project, this evidence will free Rodney.” 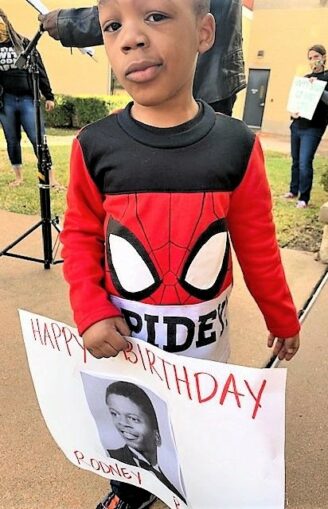 R.J. Reed, son of Rodrick and nephew of Rodney, has protested from Bastrop to the U.S. Supreme Court for his Uncle Rodney.

After taping signs on their cars, people paraded their car caravan around downtown Bastrop with horns blazing, calling attention to this unjust case. Two decades of events in Bastrop have made most people in this small town, 30 miles outside Austin, familiar with the Reed case. Many shoppers gave thumbs-up and smiled as the caravan passed them.

Closing out the events, Rodrick Reed said, “If we move and work together, we can not only free Rodney, but we can also abolish this death penalty. It’s racist! It’s inhumane! At the end of the day, it’s just plain corrupt.” 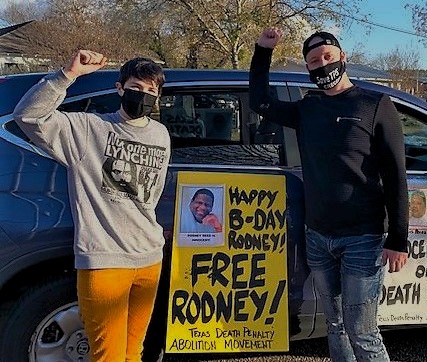 Reed’s evidentiary hearing, which was granted following a Nov. 2019 stay of execution has been postponed twice and is now set for May 17. The family’s Reed Justice Initiative is planning to have one event each month leading up to the May hearing.