Bulletin: After this article was written, on Nov. 23 pressure from business executives forced the administration to cooperate with the transition to Biden/Harris. #45, however, has yet to concede the election and continues filing suit to reverse vote counts.

If the political struggle were determined simply by adding up potential forces, #45 would be meeting now with Joe Biden, and the two would be preparing the next capitalist administration of the U.S. government. 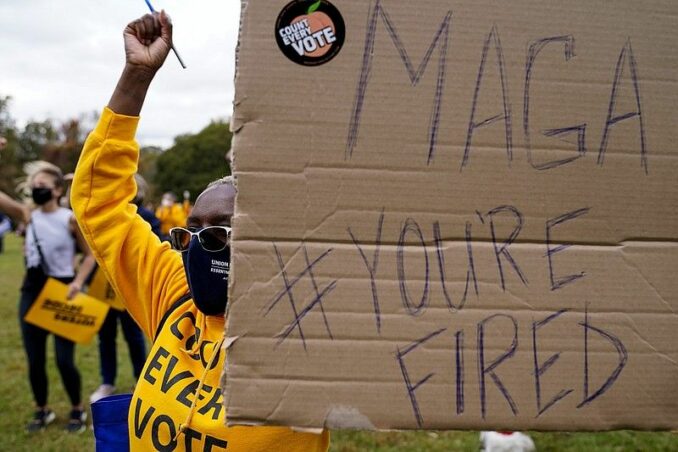 Have no illusions. Both Republicans and Democrats share a common imperialist foreign policy. They both defend the interests of Wall Street. They both feed the Pentagon.

For more than the past century, the two big political parties, despite bitter competition to get control of a two-trillion-dollar budget, have cooperated in the transition. This year Biden can’t even get his hands on government funds to prepare to take office.

Judging by statements of CEOs and former government officials, the ruling class backs Biden. Each day another Republican politician or two goes on record of advising #45 to concede, to cooperate with the transition team. Each day, another European imperialist head of state calls Biden to congratulate him.

If you believed that political struggles or class struggles — or for that matter, wars — were decided by counting the number of boots on each side, you might conclude that this battle is over.

Yet as of Nov. 23, no such transition meetings are taking place. The grotesque Rudy Giuliani sues another state; #45 refuses to give in.

It raises the following questions for the working class — considered in its broadest definition — employed, unemployed, gig and permanent, youth and retired, and including all nationalities, genders and people with special oppressions: Should the working class get involved in this struggle and how?

The workers have a side

The answer should be obvious. Allowing #45 to overthrow the elections would be a blow to democratic rights, a blow to the workers and a surrender to his attack on the voting rights of workers, especially of the Black community.

Have no illusions. Big money, big media and decades of anti-socialist indoctrination determine U.S. elections. Neither major party represents the working class. But we can’t let the Trumpites throw votes from Black and other people of color in the trash can.

The working class should intervene and has the opportunity to do so as an active force. It should make its own demands, not simply as an appendage to the Biden/Harris administration and its ruling class backers.

Voters rejected #45 by a lead of nearly 7 million votes. Judging by the cheers on Nov. 7 when the media opted for Biden/Harris, millions of people felt great. More quotes from those celebrating reflected relief at rejecting Trump than elation at electing Biden.

The voters said no to #45, despite the Republican effort to suppress Black and — except in Florida with a large number of right-wing Cubans and Venezuelans — Latinx voters. In the states Biden flipped — Georgia, Pennsylvania, Michigan and Wisconsin — a high turnout in the big cities with large Black populations — Atlanta, Pittsburgh, Philadelphia, Detroit and Milwaukee — made the difference.

Thus, despite the distortion of the undemocratic Electoral College that weighs the vote toward rural areas and away from cities, the Democrats also won in that undemocratic arena, by 306 to 232. 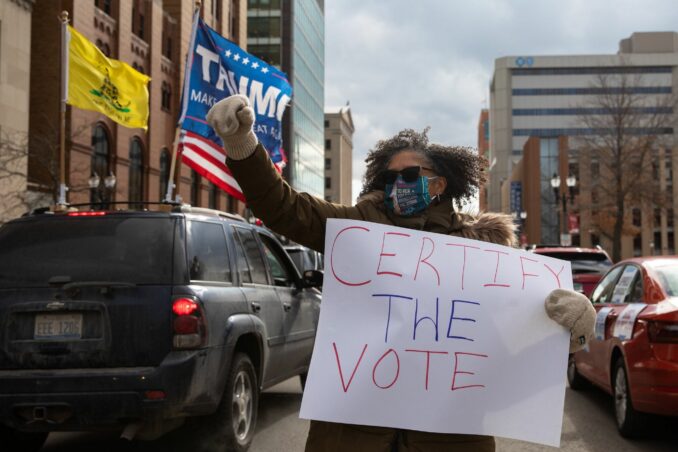 Now the desperate loser is trying to overturn votes by claiming — without evidence − electoral fraud in largely Black cities like Detroit and Philadelphia. He’s trying to reverse — that is, steal — the election, and suppressing Black voters — suppression that has a long history in the U.S. — is his tactic.

If Wall Street, the establishment and the courts have decided for Biden, you might conclude that workers and progressive forces no longer need to act. But then you would be ignoring an important truth: In a crisis, it’s active forces, social forces in motion, that determine political struggles and class struggles.

Even if #45 fails in his grotesque attempt to overturn the election, his stubborn repetition of his Big Lie has already mobilized his reactionary base. Tens of thousands of them took the streets of Washington, D.C., on Nov. 14. They will still be around after Jan. 20.

There are other millions, however — consider those who cheered on Nov. 7 — who it’s possible to mobilize to come out again. This time they can actively counter #45 and his followers. They can show the reactionaries what they’re up against. And as they do this, the workers can make their own demands on Biden.

It’s obvious such demands are needed. Already, it seems that the Democratic leaders are yielding to pressure from the Republican resistance in the Senate. A report in the Nov. 22 New York Times says, “Advisers to President-elect Joseph R. Biden Jr. are pushing for Democratic leaders in Congress to reach a quick stimulus deal with Senate Republicans, even if it falls short of the larger package Democrats have been seeking.”

That’s early notice of a rotten compromise with the Republicans. A massive mobilization can stop this.

Such a mobilization can stop the Democratic leadership from cutting down the left wing of their own party. The center-right leaders have already blamed the leftists for “down-ticket” losses, that is, where those running for lesser offices fared worse than Biden/Harris.

That argument contradicts the success of the furthest left Democratic representatives, for example, the women in “the Squad,” who all won reelection, most by large majorities. These candidates raised issues the working class is concerned about, like health care and the climate crisis and fighting racism, and aroused enthusiastic support.

It was one of the Squad, Rep. Rashida Tlaib, who with Rep. Debbie Dingell led the mobilization of people in her Michigan district against the Trumpites’ attempt to subvert the vote in that state. It’s a beginning of what can be done on a national level.

Stop #45’s fight to stay in office. Don’t even let him leave with his head up.