A surprisingly progressive Supreme Court decision found that over one-third of Oklahoma still falls into “Indian Country” under federal law for the Muscogee Creek Tribe and other Oklahoma tribes.

The court ruled July 9 in McGirt v. Oklahoma that under treaties dating back two centuries, much of eastern Oklahoma is Indian Country. That means tribal law and federal law apply there in criminal cases involving Native citizens, not Oklahoma state law. Treaties are recognized in the U.S. Constitution as “the law of the land.”

Until the Supreme Court ruling, most felonies in eastern Oklahoma, including cases involving tribal citizens, had been prosecuted in state courts by district attorneys. The court’s decision hinged on the question of whether the Muscogee / Creek reservation continued to exist after Oklahoma became a state in 1907. 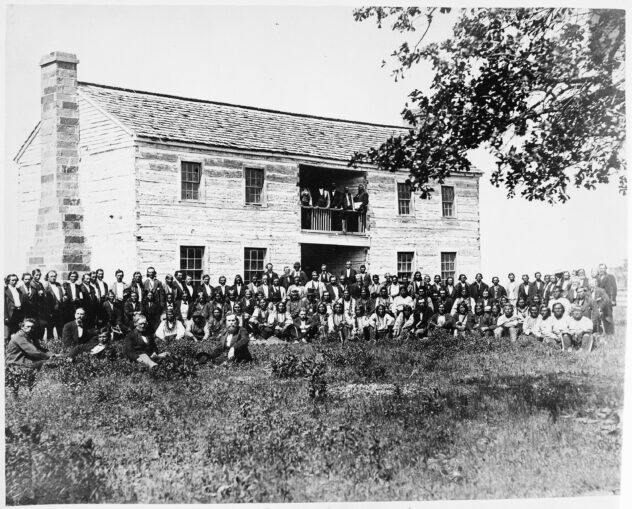 Indigenous delegates from 34 tribes in front of the Creek Council
House, Indian Territory in 1880.

This ruling applies to the five nations in eastern Oklahoma — the Muscogee or Creek, the Cherokee, the Choctaw, the Chickasaw and the Seminole nations. These Five Tribes were forced from their ancestral homelands in the southeast on the Trail of Tears in the 1830s by the U.S. government. Today, half a million tribal citizens live in dozens of Oklahoma counties covering more land than the state of South Carolina.

Two hundred years ago, all of Oklahoma, except the panhandle, was Indian Territory. This territory included the existing homelands of several Indigenous nations, including the Apache, Arapaho, Comanche, Kiowa, Osage and Wichita.

The New York Times wrote July 9: “The 5-to-4 decision, potentially one of the most consequential legal victories for Native Americans in decades, could have far-reaching implications for the people who live across what the court affirmed was Indian Country. The lands include much of Tulsa, Oklahoma’s second-biggest city.”

Justice Neil M. Gorsuch, who had previously sided with Native tribes in other cases, joined the court’s more liberal justices in this ruling. He wrote in the majority’s opinion that “Congress had granted the Creek a reservation, and that the United States needed to abide by its promises.

“Today we are asked whether the land these treaties promised remains an Indian reservation for purposes of federal criminal law,” Gorsuch wrote. “Because Congress has not said otherwise, we hold the government to its word.”

Chief Justice John G. Roberts Jr. warned in a dissenting opinion that the court’s decision would wreak havoc and confusion on Oklahoma’s criminal justice system. And in alarmist language, Sen. Ted Cruz of neighboring Texas tweeted that the Supreme Court “just gave away half of Oklahoma, literally. Manhattan is next.”

Wreaking havoc and genocide in Indigenous nations has resulted in racist decisions from education to housing to use of Indian land — this is what the U.S. government and individual states have done to Native peoples since the first colonies were settled by England.

Madonna Thunder Hawk, an organizer with the Lakota People’s Law Project, said the court’s decision and a recent federal ruling that ordered the shutdown of the Dakota Access Pipeline in North Dakota had been cause for celebration. Just not too much. “It’s a war for us,” she said. “There are some victories, but the war continues.” (New York Times, July 6)

The Commission for the Protection of Cherokee Nation Sovereignty issued a press release with several points of concern following McGirt. One is that the Principal Chief engage with members of Congress, who may be contemplating legislation, and oppose any legislation that would disestablish tribal reservations. 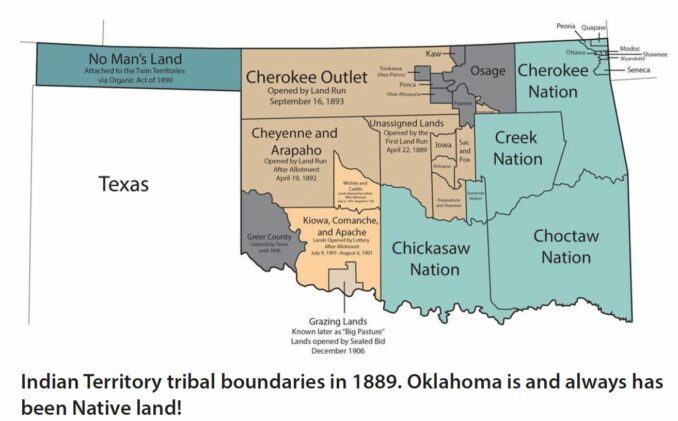 Mary Kathryn Nagle (Cherokee) spoke on a ICT radio broadcast to explain why the current effort to disestablish tribal nations is going to fail. As a Cherokee citizen and an attorney, Nagle and Sarah Deer (Mvskoke) filed an amicus brief on behalf of the National Indigenous Women’s Resource Center, the American Civil Liberties Union and other organizations to analyze the gendered implications of the decision. She spoke on air to challenge concerns that a conservative think tank, the Oklahoma Council on Public Affairs, have brought to the entire Oklahoma congressional delegation. (tinyurl.com/y5oofhvk)

“You can’t sign a treaty with a tribal nation, have it signed by the president, ratified by the U.S. Senate saying this is your reservation, and then take it away because in 2020 the state of Oklahoma thinks it’s an inconvenient reality for them,” Nagle said.

In a year when racist names and logos of sports teams have been changed, when the Supreme Court ruled against the Dakota Access Pipeline, when racist statues have been taken down or defaced, the McGirt ruling in July is one more step of progress for peoples who have been fighting the colonial invaders since Columbus was discovered in 1492.