In a campaign which began in early summer, activists are working with residents of Council District 5 in Philadelphia to petition City Council to change the name of a block of North Wallace St., where he grew up, to “Mumia Abu-Jamal Way.” 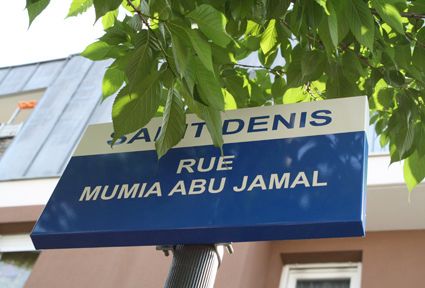 In 2006 the Paris suburb of St. Denis named a street in honor of Mumia Abu-Jamal.

Their petition reads: “Mumia [Abu Jamal] is one of the leading figures of contemporary Philadelphia Black history who has tackled issues of racial injustice, policing, prisons, labor and international politics. In this city of ‘brotherly love’ there has been little love shown to the brothers and less to the sisters. Philadelphia is a mostly Black city, and yet Black residents are virtually absent from the public history and monuments of the city.”

Mumia Abu-Jamal grew up in a close-knit Black community on Wallace Street. A Philadelphia “native son,” he became a high school activist, journalist, member of the Black Panther Party, author and a scholar. His voice became recognized as a powerful tool for social change during his career on WHYY radio.

Now unjustly imprisoned since 1981, and under constant censorship, he has written more than a dozen books about Black history, global imperialism and social justice issues, including his recent book “Have Black Lives Ever Mattered?” (2017)

The petition also states: “In this mostly Black city, which boasts over 1,500 public sculptures and monuments, only two sculptures pay tribute to Black history and life in the city — the recently constructed monuments of an unnamed school aged Black girl which stands in South Philadelphia’s Smith Playground (2019) and the statue of [the late 1800’s civil rights activist] Octavius Catto at City Hall in 2017.

“Monuments and memorials are central to making important history public and accessible. The renaming of Wallace St. is a crucial symbol that will mark the history and future of movements for social justice in the city that claims to be the birthplace of liberty.”

Dr. Tajah Ebram, a scholar of African American Studies at the University of Pennsylvania, who wrote her dissertation on the MOVE organization’s conflict with the city government, wrote the petition.

Workers World spoke with MOVE member Mike Africa Jr. about the project.  “The Philadelphia Fraternal Order of Police have tried to use their power to bury Mumia’s case and his story in this city. Yet around the world he is well-known and loved,” Africa noted.

“There is a street named after him in St. Denis in France. His image is seen on T-shirts anywhere you go in the world. We wanted to show that despite what the police say, Mumia is loved in his hometown.”

Most recently the FOP backed a questionable Pennsylvania Supreme Court procedure that has unnecessarily delayed a promising appeal case Abu-Jamal first filed in 2016.

Mike Africa noted, “Every time we start explaining the petition, people are eager to sign even before we can say Mumia’s name. Children as young as four were chanting ‘Free Mumia.’ We have gathered hundreds of signatures in that community, and we hope to broaden the campaign to include all of Philadelphia.

“Whenever we go there, we also take food, movies about Mumia, books and other information to educate the people. We have also reached out several times and in different ways to Councilmember Darrell Clark, who represents the district, but he has not responded. We are giving him a chance.”

The petition notes that little significant history of Black Philadelphia life and struggle has been documented. This history was mocked in 2018, when a portion of 59th Street in West Philadelphia was renamed “Wilson Goode Sr. Way.”

In 1985, Philadelphia Mayor Goode allowed police to drop a bomb on MOVE’s home on Osage Avenue. Goode stood back as firefighters allowed the resulting fire to eventually destroy 61 homes in the Black neighborhood of Cobbs Creek and to kill 11 MOVE members — including six young children.

Rizzo statue down, Columbus next?

The Black Lives Matter movement inspired recent struggles over the names of city streets, buildings and statues. After protests in Philadelphia followed the police murder of George Floyd in Minneapolis last May, the city government finally removed the Center City statue of racist former mayor and police commissioner Frank Rizzo.

The petition concludes: “Christopher Columbus has a major boulevard named after him, as well as a statue, which until very recently stood looming as a violent symbol of his and other colonizer[s’] violent massacre of Native peoples in the Americas.

“Statues and street names in our city must more accurately convey the history of Black residents who have for generations survived continued racism and violence. It is imperative that we honor the Black activists who have pushed to transform our society into one that is truly free for all. Mumia Abu-Jamal is just that person.”