In a Sept. 21 press conference, Florida far-right Governor Ron DeSantis launched a new attack against the continuing protests for Black lives with the announcement of a reactionary legislative bill, the “Combating Violence, Disorder and Looting and Law Enforcement Protection Act.” The bill would drastically intensify criminal charges against protesters, and it would allow civilians to harm protesters with few to no repercussions. 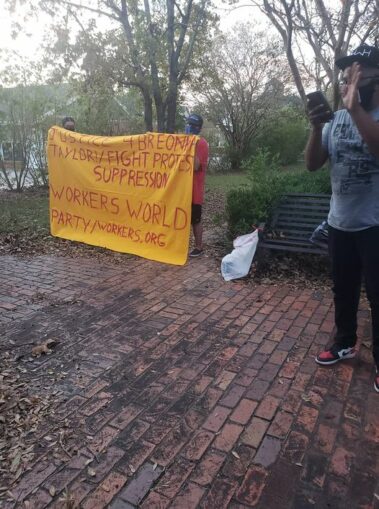 The bill is part of an accelerating wave of neo-Nazi, white-supremacist assault — both legal and vigilante — on protests which have flooded the country after the Minneapolis police murder of George Floyd in May. Right-wing Texas Governor Greg Abbott announced a set of similar legislative bills Sept. 24.

Workers World Party-Central Gulf Coast branch met the threat by DeSantis with a “Fightback Against Protest Suppression” rally of staunch activists in downtown Pensacola on Sept. 26. In the aftermath of Hurricane Sally, with communication networks down, representatives of Socialist Trans Initiative, Black Voters Matter and the WWP branch denounced the governor’s attempt to suppress protest and called for “Justice for Breonna Taylor!” Taylor was killed as she slept, when cops invaded her Kentucky residence in March.

DeSantis’ bill would make blocking traffic during an “unpermitted protest” a third-degree felony and would hold the driver not liable for injury or death, if they “flee for their safety.” There have been scores of incidents during the recent uprisings where racists intentionally drive into crowds to harm and kill protesters. This bill would allow these attackers to avoid charges, if they use the same racist excuse that killer cops give for shooting Black people: “I feared for my life.”

In addition, the bill would make destroying or toppling any monuments a second-degree felony. This is a direct attack on protesters after several years of them pulling down racist Confederate statues. It is no surprise to anti-racist, anti-colonialist protesters that statues and monuments to colonialism and white supremacy are being protected, while thousands of people — the majority Black, Brown and poor people — are dying from COVID-19 because of medical malpractice by the state.

Perhaps one of the most egregious additions made in the proposed law is assigning RICO liability to anyone who organizes a protest or assembly deemed “disorderly” or “violent” — a designation solely in the hands of police or other state entities. The Racketeer Influenced and Corrupt Organizations Law enables prosecution of all individuals involved in an organization ruled “criminal.”

This means, for instance, if a social justice group organizes a rally which police declare “disorderly,” the state could arrest everyone in the organization under a RICO liability, making all members liable to criminal charges. This is an attempt to crush entire organizations that are in the streets fighting white supremacy.

The Florida bill would also increase the mandatory minimum jail sentence for “striking a law enforcement officer,” mandating anyone convicted of that crime to remain incarcerated for at least six months. Of course, activist video documentation shows that cops are most often violent aggressors at protests — and then later charge protesters who defend themselves with “striking a law enforcement officer.”

In an attack on the “Defund, Disarm, Abolish the Police” movement, the DeSantis bill would prohibit state grants or aid to any local government that slashes the budget for law enforcement services. Masses of people in many communities are now demanding police budgets be cut in order to fund community projects and services. The bill’s far-right message is clear: Community programs must suffer — and communities must suffer under a police state.

Finally, the bill directly attacks jail support for protesters who are arrested. It denies bail or bond until the first appearance in court, if a person is charged with a crime related to “disorderly or violent assembly.” In the last several months, there has been an increase in protesters thrown in jail and kept in jail indefinitely while they await a hearing. This bill would solidify that approach, with the arrested person forced to remain in jail indefinitely until a hearing is scheduled, days or weeks later — effectively incarcerating people to keep them from rejoining protests.

Activists in Florida are mobilizing more actions against this “Protester Suppression Act” — to say NO to a police state!