June 29 — No country boasts louder of its success than the United States. This is the most powerful capitalist country in the world, based on its vast wealth, huge industrial output and formidable military. 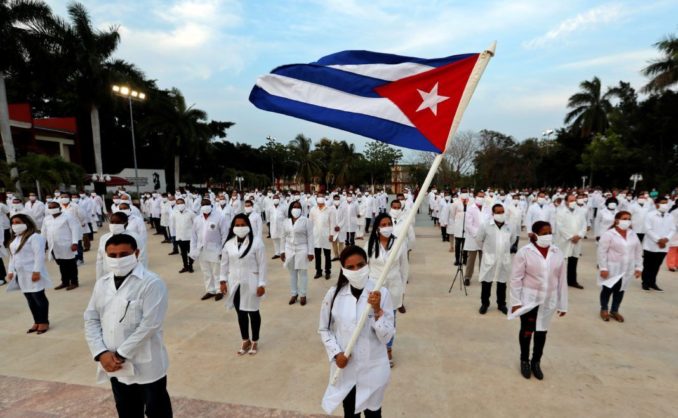 A medical brigade of over 200 Cuban doctors prepares to leave Jose Martí Airport in Havana on the way to South Africa to provide assistance during the COVID-19 pandemic.

But the U.S. is also the country with the most COVID-19 cases in the world — by far. And they are spiking right now, just when the powers-that-be were predicting that it would be safe for the economy to open up again.

Databases that track the growth of the pandemic around the world are revealing a highly significant fact: The countries where there has been the most progress toward combating capitalism have also most successfully contained the virus.

Here are some figures, as of June 28, provided by worldometers.info/coronavirus:

Fidel Castro led the Cuban Revolution to victory over the bloody U.S.-backed dictatorship of Fulgencio Batista in 1959. He announced to the world that the Cuban people had achieved “a socialist revolution under the very noses of the Yankee imperialists.”

Since then, Cuba has become a medical powerhouse, sending doctors and nurses to poor countries around the world suffering from imperialist-imposed underdevelopment.

Another country in Latin America that has successfully controlled the virus is Venezuela, which reports two deaths per million people.

Venezuela is on a difficult road to socialism because of its dependence on oil and the world capitalist market. The U.S. government has attempted to destroy its economy by imposing sanctions. Nevertheless, Venezuela’s success in keeping people safe during the pandemic has in recent weeks led many of its citizens who had left the country to return.

Al Jazeera reported on June 28: “For more than a decade, thousands of Cuban healthcare providers have been living in Venezuela, helping to build up its health infrastructure for working people. At the same time, Venezuela has been subject to U.S. sanctions meant to destroy its economy.

“This led many middle-class Venezuelans to move to neighboring Colombia. But now, because of the high rate of COVID in Colombia, Venezuelans are returning. They are required to stay in quarantine for two weeks before moving around freely, a precaution against spreading the disease.”

People’s China, where the initial outbreak occurred, has now contained the disease. As of June 28, its COVID deaths average only three per million people, compared to 388 for the U.S. For the same date, new cases in China were 17; new cases in the U.S. were 40,540. New deaths that day in the U.S. were 285 people — and in China, only three.

Facts are facts. Health care is a priority in countries struggling to build socialism in a world where capitalism is still the dominant social system. Capitalism kills people in many ways, but nowhere is the documentation more stark than in the coronavirus figures.