This article by Workers World Party founding member and chairperson Sam Marcy was published in WW on April 26, 1990. Some language, spelling and punctuation have been updated.

Back in the Middle Ages, when a natural catastrophe like a crop failure or storm devastated large areas of a country, reducing the mass of the peasants to starvation while the lord’s manor was well stocked with provisions, it was considered wise policy for the lord to call the peasants into the courtyard. There a priest would intone the old biblical adage that the meek, the humble, the submissive will inherit the Earth. 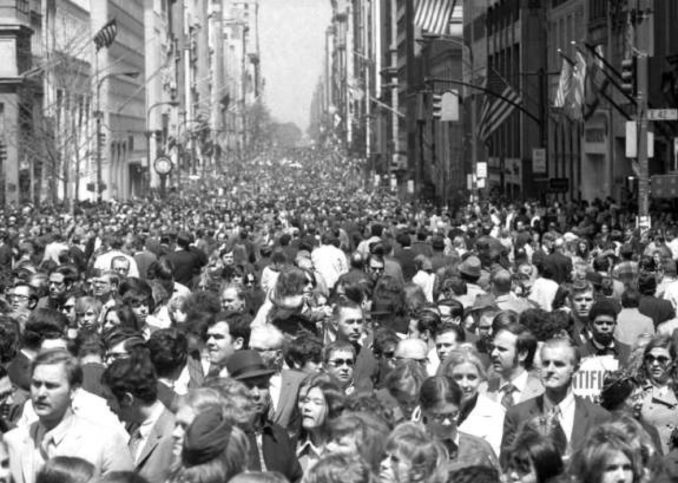 Today’s giant predatory corporations know the efficacy of such a tactic. They also resort to an even earlier practice, from the era of ancient Rome, when rebellious slaves were pacified with bread and circuses.

The monopolies which have vandalized the environment respond to the fear of an ecological catastrophe by encouraging a festive, carnival atmosphere on Earth Day, diverting what should be a serious demonstration away from the real polluters.

The largest corporations in this country, and the worst polluters, including Exxon, Mobil, Weyerheauser and Dow Chemical, to name only a few, have assembled a sophisticated media and political campaign aiming to show that they have done their utmost to use their immense technology for environmentally sound purposes, all for the good of the people.

Twenty years ago, on the first Earth Day, the environmental movement was officially born in the United States. In that year, 1970, millions of workers, young and old, men and women, LGBTQ2+ and cisgender heterosexual, people with disabilities and nationalities from all over the world demonstrated their keen desire to avoid the terrible ill effects of pollution and the destruction of the physical elements of the environment.

It was a day of great promise, an outpouring of mass enthusiasm for ending the environmental damage that was rampant throughout the world but affected the industrialized countries, especially the U.S., most of all.

Today, 20 years later, there is more pollution, more damage to the air, the forests, the oceans, the rivers, indeed to all life. Acid rain, the ozone layer, global warming, toxic and radioactive wastes, and endangered species have become household words.

Earth Day 1970 came in the midst of the bloody carnage in Vietnam.

That year the U.S. invaded Cambodia. The Nixon government was under acute pressure from the antiwar and civil rights movements. It was a year in which huge masses of people were awakening to the real problems facing this country: war, hunger, racism, sexism, pollution.

For another five years, the U.S. government got around the movement, continuing the war while making promises of an alluring peace, at which time all these problems would be solved and above all there would be an effort to clean up the environment.

Finally the mass protests against the Vietnam War in the U.S. and all over the world put an end to it. Glowing promises then began to flow freely like water in a stream.

Now, it was said, the air would be cleaned up, nuclear waste would be eliminated, and environmentally clean plants would be built. Polluting sources of energy like coal, petroleum and nuclear energy would be put under strict governmental control. The damage would first be reduced and eventually, certainly by 1990, would be eliminated.

Such were the promises 20 years ago. You can look them up in the yellowed pages of the old newspapers. “Conversion planning” was the buzzword. Military-related companies especially were anxious to show they had already drawn up the blueprints for converting to cleaner, more peaceful methods of production.

What happened to them? Was it all fraud? Was it make-believe? Or was it both?

The fact of the matter is that no sooner was the war in Vietnam ended than the Pentagon and the military-industrial complex began not to scale down the armaments, not to beat their swords into plowshares, but to expand and modernize on an unprecedented scale.

This is of critical importance to all questions relating to the security of the physical environment, for there is no greater polluter of the air, the water and the land than the military. Even when it is not actually using them, the Pentagon is constantly testing all kinds of weapons — conventional, nuclear, chemical and biological.

Trillions for the Pentagon

Scientists may argue over how old the planet is, how fragile is its ecology, or its degree of warming, but there can be no disagreement that since Earth Day 1970, literally trillions of dollars have been spent by the Pentagon.

Since Earth Day 1970 countless acts of war have been carried out or supervised by U.S. forces in El Salvador, Nicaragua, Grenada, Panama, Libya, Lebanon and Afghanistan, lately in Peru and Bolivia, and innumerable covert operations in Cambodia, Angola, Mozambique, Ethiopia and dozens of other countries. Large-scale military exercises take place each year in Korea, Germany and the Caribbean, as well as the U.S. itself.

Today, just like 15 years ago at the end of the Vietnam War, there is a flood of peace promises. Congress is agog with them. The White House has given its blessings. Even the Pentagon speaks of the peace dividend. But is there any substance to it?

The kind of Pentagon operation just referred to is expanding more rapidly than ever. Of course, redundant nuclear weapons are being discarded on both sides of the East-West confrontation line. But mark well. Not one nuclear test related to the modernization of the nuclear fleet, submarines, aircraft carriers or the new “super-supersonic” planes has been canceled, except for reasons of bad weather or malfunction. The brave people of Greenpeace and other groups that have tried to stop these tests can tell you what is really going on with the alleged reduction of the nuclear threat.

The greatest of all polluters, the biggest offender and the most significant element in the vandalism of the environment remains the Pentagon. As this is being written, Secretary of Defense Cheney is opposing even the smallest cuts in sea-based missiles. On the contrary, they are continuing to MIRV the sea-based missiles (add multiple warheads), which means multiplying their capacity for devastation.

Lest some think we are taking a narrow, pacifist view by focusing on the war-making establishment, let it be said that the Pentagon is of course not an island unto itself. Every single one of the 100 largest banks in the U.S. lends to, holds deposits of or floats securities for corporations in league with the so-called defense industry. That’s a lot of banks.

Of all the 15,000 banks in the U.S., small, medium and large, not one would relinquish the profits it gets in connection with defense orders. There is not one bank, not one huge corporation that will put people ahead of profits. Such is the reality of the situation on Earth Day 1990.

It is now estimated that the bailout of failing banks will cost the government $500 billion. The amount appropriated for the environment is a mere pittance, a tiny fraction of this gigantic sum.

Of the giant industries that play a key role in the U.S. economy, petroleum and coal pollute and vandalize the environment the most, even though hundreds of thousands of workers have been displaced from these industries. All manufacturers, especially in the petrochemical industry and the pharmaceuticals, and including those using the most sophisticated technologies, contribute their share to pollution. For the most part they are completely unregulated; any government supervision is strictly superficial.

Good will vs. profits

To get to the core of the problem, one must take into account that it is profits which motivate the operations of the capitalist economic system in the U.S. Ever fewer and more powerful groupings of industrial and financial magnates control the means of production and run the country, from the local county offices all the way up to the White House.

If we overlook this fact, if we believe that just protesting, just appealing to the good will and humanitarian instincts of these giant, avaricious and predatory elite financiers and industrialists will change the situation for the better, we will be building upon illusions.

The mass of the people have been told over and over again to be patient, to have good will toward their oppressors, that in time good behavior on the part of the masses would reach the consciences of the evildoers. The meek shall inherit the Earth.

But the meek in history have never made it. There’s not a single example over hundreds of years where the rich and powerful have given way to the poor, to the ordinary workers and peasants, just because they have been good and subservient and passive.

To appeal to the good will, common sense and even self-interest of the big financiers and industrialists is to expect them to be able to abandon the lucrative profits, exploitation and oppression which are linked to pollution. This is a bankrupt theory, unsuitable in this or any other age.

The history of the environmental struggle shows that relying on the multinational corporations, on the banks, on the insurance companies and capitalist politicians brings no results.

At this critical phase in world history, it is only the deliberate activity of the masses themselves, when they intervene and threaten the system of capitalist exploitation and oppression, that can sweep away the polluters like the hazardous waste they have created on this planet.