By March 26, 3.3 million people in the U.S. had lost their jobs as large parts of the economy collapsed the week before. This 33 percent increase in joblessness marked the fastest rate of increase in any week since the Great Recession. Goldman Sachs estimates that as many as 14 million U.S. workers may lose their jobs due to closures related to the coronavirus. 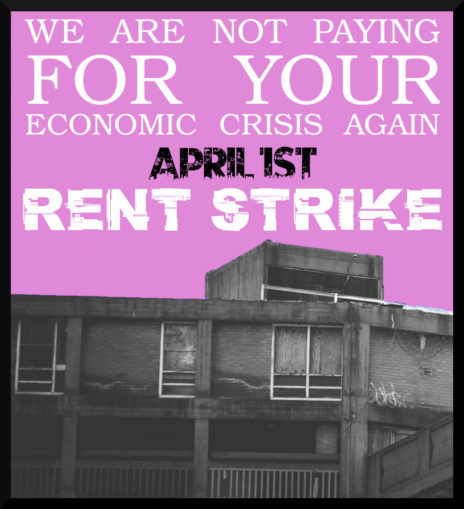 Even before the COVID-19 pandemic, 78 percent of U.S. workers lived paycheck to paycheck, with 58 percent unable to survive a $500 unexpected expense. For many, rent amounts to a third or half of their monthly income. During this crisis, workers deserve to spend what little money they have to make sure they are safe, not give it to banks and landlords. (tinyurl.com/spuwqyg)

Forty-three million households in the U.S. are renters, with approximately 129 million people facing housing uncertainty due to the economic instability caused by the COVID-19 pandemic. The pressing question: How will these folks pay rent?

On March 23, renters in Montreal started a movement by hanging white sheets from apartment windows to tell neighbors and the community they are part of “No Rent! No Rent Debt!” The action is now gaining traction in the U.S. Petitions are being circulated in all 50 states urging tenants to organize rent strikes. Spray-painted messages and banner drops calling for “Keep Your Rent” and “Rent Strike” are popping up on buildings and along expressways from coast to coast.

Rent moratoriums are not enough!

On March 25, Trump announced that the Department of Housing and Urban Development would temporarily suspend all foreclosures and evictions. The plan expects individual workers to catch up after the pandemic while landlords continue with business as usual.

Many cities and states are being forced to pass rent moratoriums as first-step concessions. In an emergency session on March 17, the Oakland City Council unanimously passed a moratorium on all evictions of renters until May 31 and noted that date may be revisited and extended.

Many renters, homeless and community advocates put pressure on the Oakland City Council during the unusual Zoom meeting session where they also voted to stop clearing homeless encampments in Oakland until there is adequate housing and shelter for the unhoused population. This is a victory.

However, on March 17, when Portland Mayor Ted Wheeler told the city there would be a moratorium on evictions, PDX Rent Strike organizers took the podium to say: “It’s just not enough. That an eviction moratorium is unclear, insufficient and weak. That people need real tenant protections to get through the pandemic. That now is the time to strike!”

A grassroots tenant organization, PDX Rent Strike’s Facebook page has an organizers’ tool kit with clear, creative instructions on how to connect with neighbors and nearby tenants to build a grassroots movement and identify local pressure points. There is already a building in Portland where all 15 tenants have agreed not to pay rent.

The site advises people to reach out and let people in the same boat know if you can’t pay rent. If you can pay rent, stand together with those who can’t. Get to know your neighbors to create building-by-building solidarity. It suggests organizing groups to defend our communities and people most at risk—people of color and LGTBQ2+ people—when evictions come the end of May. In Portland, hundreds of thousands of fliers are being disseminated.

‘Pressure the landlords and banks, not renters’

In an interview on Portland’s KBOO radio station, Randall, a PDX Rent Strike organizer, said, “If we don’t organize this by May, we will have a massive spike in the homeless and bankruptcy problem.” (tinyurl.com/sav9dy2)

The PDX Rent Strike’s Facebook page reads: “Our initial demand is simple: every governor, in every state, must do what is necessary to ensure a two-month freeze on the payment of rent, residential mortgages, and utility bills (including sanitation, power, water, gas, & internet services) to allow working families to do what is necessary to prepare for the difficult social measures required to flatten the outbreak curve.

“We are an alliance of political organizations, tenant organizers, mutual aid organizers, progressive activists, and climate activists from across the United States. We are working to build strike infrastructure to allow the American working class to fight back against the interests of the wealthy and weather this crisis safely.”

In addition to the rent strike, an anti-eviction mapping project—the “Covid-19 Emergency Tenant Protections map”—shows where tenants are working to pass, and U.S. officials have passed, emergency tenant protections during the crisis. A global map is coming soon. (tinyurl.com/tgz6v5l)

PDX Rent Strike also calls for vacant housing units to be given to the homeless. With one of the largest homeless populations in the country, Portland has over 16,000 empty apartment units owned by speculators and large property owners who don’t expect them to get rented.

While the city opened Portland’s convention center to provide housing, it is an open-air space where disease can spread cot-to-cot. Across the street a newly constructed, massive Marriott Hotel is sitting empty.

In New York City a “Covid-19 Rent Strike” website was created to answer questions, offer resources and provide information about networking.  Similar to steps outlined on the PDX Rent Strike’s Facebook page, organizing tips on the NYC site advise people to connect with other tenants in the building and citywide, write letters informing landlords you will not be paying rent, spread the word doing outreach on social media, set up legal support and coordinate eviction defense in your community.  (tinyurl.com/wondd6f)

In Washington, D.C., a “Stomp Out Slumlords” campaign was launched by Metro DC DSA’s Tenants’ Rights Project. In a pamphlet they have distributed, the Tenants’ Rights Project explains how the pending rent strike is different from past U.S. rent strikes where the tenants’ leverage is that they have money which they are withholding. The current reality for most U.S. tenants is that they will not be paying their rent because they lack the funds to do so.

In Philadelphia, the Tenants Union and Tools for Tenants are providing residents with resources to aid them in organizing rent strikes. Tenants are encouraged to seek connections and organize with others who have the same landlord. Tenants are also encouraged to formulate their own demands based on the needs of their fellow tenants. The Philadelphia Tenants Union will be hosting an organizing teach-in on Friday, April 3 via Zoom.

Doris Hiegl contributed to this article.