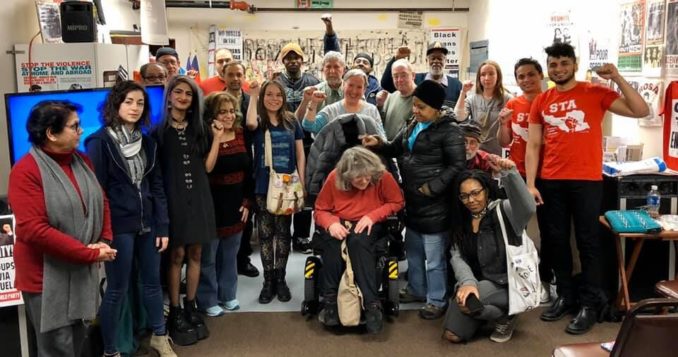 The IWWD celebration in Boston, March 7.

The socialist origins of International Working Women’s Day were celebrated March 7  by the Boston International Action Center and the local branch of Workers World Party. A powerful program saluted both the key role of student activists in the Sanders movement in the U.S. and the courageous women-led uprising in Shaheen Bagh, Delhi, India, against repression and anti-Muslim laws in that country.

Women freedom fighters, past and present

WWP youth activist and Team Solidarity singer Kristin Turgeon greeted the crowd with a trilogy of songs dedicated to women freedom fighters. She honored General Harriet Tubman, leader of the Underground Railroad, who struck countless blows against slavery and freed hundreds of enslaved African people; Puerto Rican Independence fighter Lolita Lebrón who opposed U.S. colonialism and was imprisoned for 25 years for her actions; and all working-class women. Turgeon closed her set with a rousing rendition of the “Union Maid” refrain: “I’m sticking to the union until the day I die.”

Turgeon then shared a brief history of IWWD, born through the life and death struggle of women garment workers in New York City in the early 1900s. She paid tribute to women in unions who are still militantly striking over a hundred years later for better pay, health care benefits, protection from sexual harassment and winning.  She also saluted Indigenous women and Two-Spirited people on the front lines to protect their land, water and national sovereignty rights from murderous energy companies, polluters and perpetrators of violence.

Turgeon concluded: “This is a period of change for the entire working class worldwide. What better time than now to fight for housing, food, jobs, quality education and universal health care for all? The revolutionary struggles of women from India to Palestine and Africa to Latin America and Asia will hasten the changes we are fighting for here in the U.S.  Let’s take this opportunity to build a strong and united socialist movement that can fight for the liberation of the entire working class and self-determination for all oppressed people!”

From Sanders campaign into socialist action

Akilah DeCoteau, a student at Northeastern University and organizer with Huskies for Bernie, shared why she became involved in the Sanders campaign: “I was attracted to Sanders’ message when he asked, ‘Why do we spend more than the next seven countries combined on the military? Why are we the only industrialized country that doesn’t guarantee health care to all its citizens?’ I wondered why, too!”

Decoteau continued: “Sanders stated it was time to get corporate influence out of politics, it was time for us to take on the military-industrial complex, the for-profit health care industry, and to start investing in people, instead of bailing out Wall Street. I couldn’t have agreed more!”

She continued,  “Today, there are tens of thousands of supporters like myself who have realized it is possible to rally, march and organize for the changes we need.  Since the start of the campaign, I’ve been organizing with local socialist groups for the first time, and I will continue mobilizing with these organizations to fight for these issues. This presidential campaign has exposed how the government and media have failed us. More people are losing trust in the two-party system and we will see an exponential growth in leftist organizations.  No matter what happens with the Sanders campaign, this is just the beginning! We will seize the moment!” 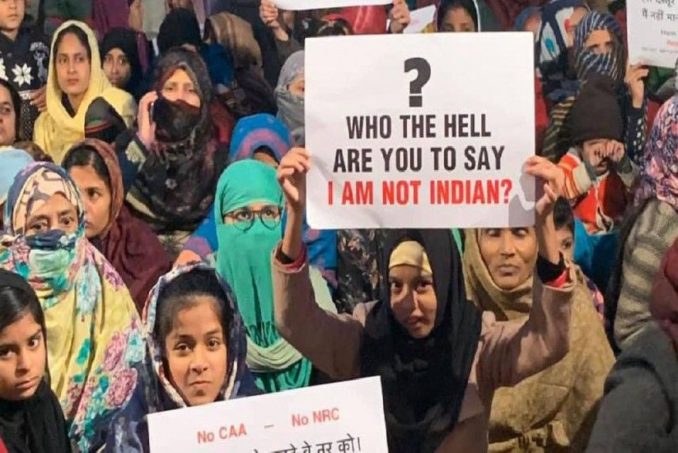 After a panel of young women spoke, Padma and Pratyush came forward — members of the Boston Coalition whose goals are to work in solidarity with activists in South Asia on justice and peace. They gave a detailed account of events that birthed the Shaheen Bagh uprising in India, which has sparked mass resistance across the country and inspired women, working-class and justice-loving people everywhere.

The movement began on the evening of Dec. 15, 2019, when 15 to 20 women, many in hijabs, left their homes and took to the streets in their Muslim-majority neighborhood of Shaheen Bagh. They occupied a major highway that led north to India’s capital of New Delhi. Word quickly spread of their sit-down strike and more women joined. Many were mothers and grandmothers protesting for the first time.

What sparked their protest? News of a vicious attack by Indian police at the nearby Jamia Millia University, where students were beaten, tear-gassed and shot with live bullets. Scores were arrested and the school ransacked.

The students had been preparing for a march on the capital to protest repressive and discriminatory changes in India’s citizenship laws, specifically aimed at Muslims, passed by its Parliament on Dec. 11. The National Register of Citizens (NRC), the  Citizenship Amendment Act (CAA) and the National Population Register (NPR) were laws sponsored by the right-wing, Hindu-fundamentalist government of President Narendra Modi.

The shocking violence inflicted on students, combined with the passage of discriminatory citizenship laws, was the spark that lit the fuse of the Shaheen Bagh women’s righteous resistance.

Pratyush explained: “In addition to targeting Muslims, these citizenship initiatives are a mechanism for persecuting poor landless peasants and migratory workers as well. There are several hundred million people in India, who as migrant workers — especially Dalits [previously known as ‘untouchables’] and Indigenous — have no documents and [would] become ‘illegal’ and ‘stateless.’ Thus, they can be forced into detention centers for super-exploitation.”

Pratyush continued: “The idea of citizenship has colonial roots — now people living in South Asia for thousands of years are suddenly ‘illegal.’ In the northeastern state of Assam in India, where the National Register of Citizens was first implemented, the problem started with the forced migration of people during the British colonial occupation. This is a project of genocide in language and deed, with parallels to the historical violence and murder of im/migrants, communists and Jewish people.”

Padma opened her talk by thanking the IAC and WWP for their consistent anti-imperialist work and their many decades of solidarity with poor and oppressed peoples around the world. She went on to describe the difficult conditions faced by women in India where the maternal mortality rate is 174 women per 100,000 live births.  Women are denied many basic rights, including access to maternity care and day care. A crime against women occurs every three minutes in India, with Dalit women facing even higher rates of violence. Living in a patriarchal country, most women have the added burden of no state or property papers in their own name.

Padma shared: “In the Shaheen Bagh [protests], women of all ages, from 9 to 90, have come together to resist the Indian government’s repressive citizenship laws.  The majority of women are homemakers and seamstresses who do odd jobs to support their children and families. They have refused to go home, stating, ‘We eat, sleep and live on the road.’”

Padma emphasized: “Women are leading the fight to force the Modi government to repeal the CAA and NRC, which threaten the rights of the most vulnerable in society, including Muslims, poor women, oppressed castes and LGBTQ2+ people.  People are now using the constitution and Indian flag to tell the fascists, ‘Don’t take away our rights given to us!’ People of Muslim faith who fought the British are refusing to be criminalized and marginalized. Popular chants at the Shaheen Bagh protests include: ‘Speak up, we are all one! Inquilab zindabad! Long live revolution! Long live love!’”

She continued: “Today there is growing unity among the people across religious and caste lines, with Dalits helping Muslims, while Kashmir is viewed as the Palestine of India. Bold and beautiful murals dedicated to the women of Shaheen Bagh evoke the struggles of women in South Africa and Palestine fighting racist apartheid settlers and passbook laws. The Chilean feminist anthem, ‘Un violador en tu camino/A rapist in your path,’ has been translated by women and LGBTQ2+ people in India who are performing the song at protests, making it clear that the patriarchy are the rapists and they are the people responsible for the extreme violence against women.”

Padma also recognized the All India General Strike of 250 million workers on Jan. 8, the largest in world history, when workers pressed demands for increases in the minimum wage, unemployment and social security benefits. The strikers also demanded, “Repeal the CAA Now!”

On Feb. 23, as more and more women joined the protests, the Modi government orchestrated a bloody, anti-Muslim pogrom. Police, backed up by hundreds of armed men, entered Delhi, killing over 50 people and destroying thousands of homes, businesses, communal spaces and mosques.

Immediately after the violence, reminiscent of Kristallnacht (1938) and Nazi pograms against Jewish people in Germany, Modi met with visiting U.S. president Trump. As these fascistic leaders patted each other on the back, they also signed new military deals aimed at encircling China.

The panelists showed video clips of the Shaheen Bagh protests and marches led by women, LGBTQ2+ people and youth in cities from Kolkata and Mumbai to London and Toronto. Pratyush shared a poem dedicated to the workers of India and women of Shaheen Bagh. A lively discussion ensued, including about three recent city council resolutions passed in Seattle, Albany, N.Y., and Cambridge, Mass., demanding repeal of the NRC, CAA and NPR.  Plans to pursue a similar resolution from the Boston City Council were discussed.

Padma closed the meeting: “The many Shaheen Baghs in India are a testament to the fighting spirit of women largely of Muslim faith who have galvanized other communities to join them in demanding Modi’s government repeal the discriminatory CAA act. People from all walks of life who have joined these brave women are demanding the right to dignity, to security of life, and an end to caste-, gender- and religion-based violence. Long live the Shaheen Baghs!  Long live workers’ unity! The struggle will continue!”

On March 24, the government lockdown of New Delhi to check COVID-19 was used as an excuse for the Modi government to send police to shut down Shaheen Bagh in the dawn hours and clear the site of all those who had been protesting the discriminatory citizenship laws for over 100 days. (hindu.com)