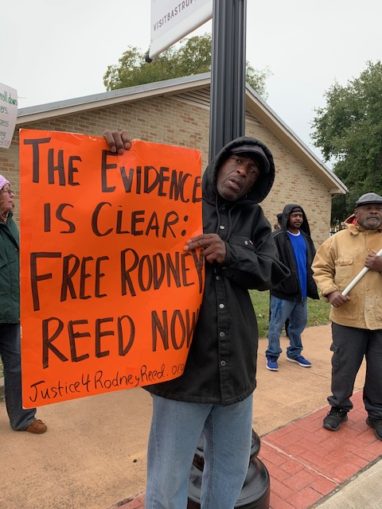 Nov. 17 — It was a peoples’ victory! It was a legal victory! On Nov. 15, Texas’ highest criminal court indefinitely stayed Rodney Reed’s Nov. 20 execution date. His case was remanded back to trial court just five days before he was to be legally lynched by the state of Texas.

Reed, an African-American man, was wrongfully convicted in 1998 of raping and murdering a young white woman named Stacey Stites. He was sentenced to death after the prosecution withheld exculpatory evidence from Reed’s defense team and after the state’s witnesses testified to false evidence.

Just hours after the Texas Board of Pardons and Paroles voted unanimously to recommend to the governor that Reed be given a 120-day stay of execution on Nov. 15, the Texas Court of Criminal Appeals issued an indefinite stay of execution.

The court cited concealed information, false testimony and possible innocence in its last-minute decision to stay the execution. Reed’s case had captured national and international attention in the last few months with the help of almost daily vigils, protests, marches and rallies.

After well-known celebrities began speaking out against his execution, there was an avalanche of support from politicians from both major bourgeois parties, athletes, civil rights organizations and just everyday people who saw the Reed case as just one more lying, racist attack on a person of color.

Finally, after over 21 years, all the evidence that will prove that Reed could not have committed the murder will be heard in a court of law.

Over two decades of torture

Reed, along with his parents, siblings and whole extended family, has had to endure the painful trauma of living on death row and waiting for Texas to murder him.

Reed’s mother, Sandra, his father, Walter, and his five brothers have fought and fought for two decades. They survived an execution date in 2015.

After Reed’s father died in 2015, his mother and brother, Rodrick, have spearheaded the family’s efforts to get justice. For the last several months, Rodrick and his spouse, Wana Akpan Reed, have traveled the country speaking out for Rodney.

From the steps of the U.S. Supreme Court to New York to Ohio, they have spoken at events in Austin, Dallas and Houston. They’ve held press conferences, marched, rallied and held countless actions in their hometown of Bastrop.

Following the indefinite stay, Rodrick Reed posted on his Facebook page: “It feels so good to finally breathe. But this fight is not over with! While we celebrate this victory, we cannot lose momentum or motivation. I think to myself every day, I wonder what Rodney is doing right now? Remember this: Rodney will be removed from death watch area and returned to his 60-square-foot cell for 23 hours a day, seven days a week, being fed through a tiny slit like a caged animal. We have to keep fighting hard while we have this powerful momentum. Rodney needs to be freed. Period. We are focusing 100 percent of our energies on bringing Rodney home alive.  . . . We miss Rodney so bad it literally hurts. I miss my brother. I know my brother wants exoneration before freedom. But we just want him home.”

Even though many celebrities have come out for Reed, it is the grassroots activists who have worked for the last 20 years to bring justice for Reed. It is the community rallies, university meetings, marches and vigils that have brought out families, students and activists.

There were 130 planned rallies across the country this weekend, and activist Shaun King, with Action PAC, sent word they were still on after the stay was announced.

Alamo Heights High School students in San Antonio gathered in the town plaza on Nov. 16 where Magoli Garcia, 17, and her classmates rallied. She thought of the protest in her humanities class after they watched documentaries such as “13th” that explored slavery and how that flowed directly into the U.S. prison system. She told the San Antonio Express News, “Even though we’re small,” she said, “we’re mighty, and we want to be heard.” (Nov. 16)

In Houston on Nov. 17 people gathered at the federal courthouse and marched to City Hall. The rally chair explained the latest news and encouraged everyone to keep up the fight. A high school debate teacher said she was going to have her students learn about the death penalty.

In Austin on Nov. 17, activists again gathered outside the governor’s mansion in an emotional rally. Rodrick Reed spoke. He thanked everyone for all their work and sacrifices and said on a Facebook live feed, “This isn’t victory. We won a small battle, but the war is still going. Victory will be when Rodney comes home to his family and we can be whole again. We are planning a lot more actions; we’re just getting warmed up. So, lace your boots up tight and get ready to fight! Free Rodney Reed!”

Rubac is a longtime leader of the Texas Death Penalty Abolition Movement in Houston.