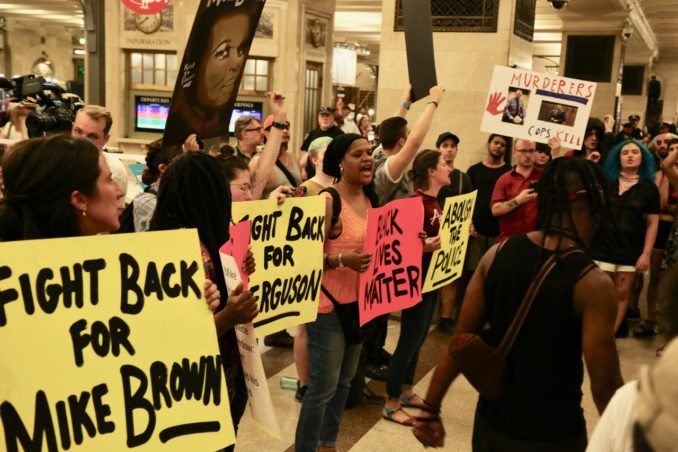 New York — Exactly five years after 18-year-old Michael Brown was shot and killed by a cop in Ferguson, Mo., Shut It Down NYC called an Aug. 9 demonstration — “Fists Up, Fight Back!” — in his memory. Protesters marched from Grand Central Terminal through midtown Manhattan chanting: “Eric Garner, Michael Brown, Shut it down, Shut it down!” As they neared Bryant Park on 42nd Street, police appeared and began trying to intimidate them. When the march reached the end of its route at Pedestrian Plaza in Times Square, several cops pointed out five individuals to be arrested and grabbed them. Other cops admitted to some of those arrested that they knew the protesters had not been doing anything wrong. Four were held in jail overnight and not released until after 5 p.m. the following day.

Brown was fatally shot Aug. 9, 2014, after being harassed for walking in the street. His killing and the decision not to indict Ferguson police officer Darren Wilson, on top of the chokehold killing of Eric Garner by a Staten Island cop a few weeks before Brown’s shooting, led to a wave of protests that helped spark the Black Lives Matter movement. NYC Shut It Down began #PeoplesMonday — weekly demonstrations against the police murder of Black, Brown and Indigenous people. The first protest was dedicated to Brown.