June 27 — Edward Goodman Africa, released earlier this month after four decades of wrongful imprisonment, spoke this morning to dozens of supporters and members of the press gathered at the Philadelphia Student Union. Janet Africa and Janine Africa were with him, making this the first public appearance of the three members of the MOVE 9 since the arrest of these political prisoners in August 1978. 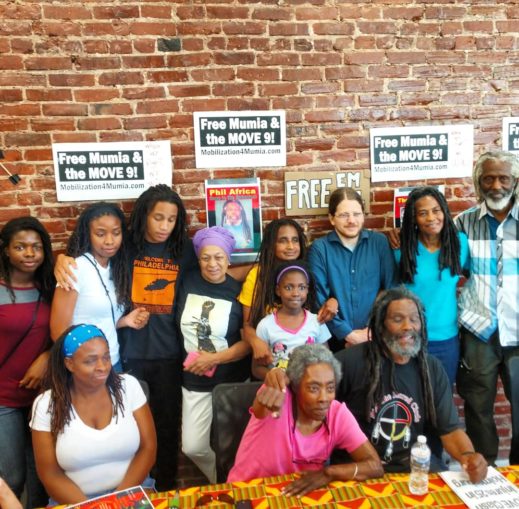 Eddie Africa, on the right seated, his arm around Ramona Africa

“The time, while it was hard, does not seem that way when I saw them,” said Eddie, gesturing to both Janet and Janine beside him. “It did not feel like it had been that long. It felt like the next day from when we got arrested.

“It’s good to be with family.”

Addressing reporters, Africa continued, “I’m telling you now, as I told them then: I’m innocent. I did not — we did not — kill Ramp.”

James Ramp died during the 1978 police assault on the MOVE house in Powelton Village, likely struck by one of the tens of thousands of rounds fired by his fellow officers that day. Nine MOVE members were all convicted of firing the same bullet.

MOVE Minister of Confrontation Pam Africa opened the press conference by playing a prerecorded statement by journalist and activist-on-the-inside Mumia Abu-Jamal congratulating Eddie on his release.

“My brother, Mu,” said Eddie in response. “That made my day.”

The MOVE members emphasized that Mumia’s clear-eyed and unbiased reporting about their organization’s activity is what made him a target of the Philadelphia police and the city’s racist Mayor Frank Rizzo in the 1980s.

Shortly after their conviction, Mumia called in to a radio talk show to question Judge Edward Malmed, who presided over the MOVE 9 case. He asked whether the judge truly believed they were the ones who shot Ramp.

“I haven’t the faintest idea,” Malmed replied. And yet he sentenced each to 30 to 100 years in prison.

“The next thing we heard about Mumia right after that was that he had been shot and was in the hospital fighting for his life,” said Ramona Africa, MOVE member and sole adult survivor of the May 1985 police bombing of the MOVE house on Osage Avenue. And since his near-fatal shooting by police in 1981, Mumia Abu-Jamal has been in prison, also framed for the murder of a cop.

Two surviving MOVE 9 members, Chuck Africa and Delbert Africa, are still behind bars. When bringing up Delbert’s name at the start of his statement, Eddie got choked up and buried his face in his hands. After being in prison for so long together and surviving together through all kinds of state-inflicted violence, getting released while Delbert remained locked behind bars was as difficult as leaving behind a spouse or a sibling, Eddie said.

The human toll of the brutal war waged on the freedom fighters of MOVE must not and cannot be forgotten. Phil Africa and Merle Africa were killed during their imprisonment under circumstances that even prison officials confess were “suspicious.” Guards notoriously and repeatedly attacked incarcerated MOVE members, with batons and baseball bats, ice picks and water cannons.

The MOVE 9’s fight will not be over until Delbert, Chuck and Mumia are released — indeed, until all prisoners are free and the institutions of white supremacy are abolished once and for all.

What’s the call? Free ’em all!