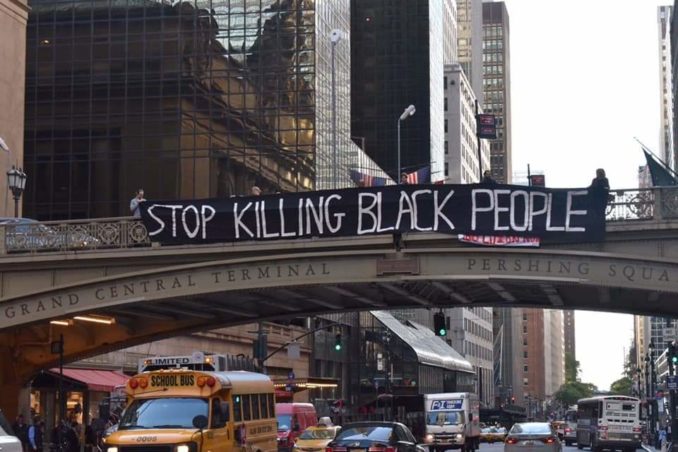 The action was one of five banner drops organized with NYC Shut It Down, Decolonize This Place and other Black Lives Matter groups in early June to raise awareness of the New York Police Department “trial” of Daniel Panteleo, the New York cop who killed Eric Garner with a chokehold on Staten Island in July 2014.

Activists, along with a journalist taking photos of the banner drop, were detained by the police and released with summonses.

Video of Panteleo killing Eric Garner and his subsequent non-indictment in December 2014 brought international attention to the epidemic of police violence against Black people in the U.S. and were driving forces behind the growth of the Black Lives Matter Movement.

This departmental trial, which concluded June 6, was a process internal to the NYPD, overseen by an administrative judge. Criminal courts are infamously unwilling to convict or even indict killer cops, and an internal process such as this is even less legitimate. The proceedings could be best described as a “show trial” to exonerate Panteleo. For example, the judge overseeing the trial has no authority to make a decision; she can only make a recommendation to Police Commissioner James O’Neill, hardly an impartial figure, who will make the final decision about what, if any measures, will be taken against Panteleo.

The Citizen Complaint Review Board argued that Panteleo should be fired and lose his pension. But again, its position is only a recommendation with no legal force. Police severely restricted community access to the trial, which took place in NYPD headquarters.

The cops and courts are parts of the capitalist state, which exists not to “protect and serve,” but to oppress and control working and oppressed people on behalf of the capitalist ruling class, especially Black people and other people of color.

As such, one can never expect fair outcomes in the courts. The courts may be a site of struggle to help build a movement, to raise consciousness and occasionally achieve a partial victory, but they do not provide an avenue to end the centuries of state violence under the capitalist U.S.  For that, what is needed is a revolution to smash the capitalist state and replace it with a workers’ state.

While the courts and the cops have conspired to protect Panteleo, they have convicted one person connected to Eric Garner’s death: Ramsey Orta, a Puerto Rican and Garner’s close friend, who shot the infamous video of Panteleo killing Garner.

For this heroic act, Orta was targeted by the NYPD and convicted on trumped-up charges. His commitment to speak up against the NYPD, even as they harassed and threatened him with imprisonment, makes him a people’s hero. Since testifying in Panteleo’s departmental trial, Orta has been placed in solitary confinement as retaliation. You can show support for Orta at wecopwatch.org/ramseyorta. You can also write to Orta directly at