Bulletin: After the NLRB denied the UAW’s petition for a vote, the Board then allowed the union to file a new petition, which it did. On May 29 it was announced that the election for union representation will take place June 12-13 — a huge victory for the workers!

Volkswagen, the world’s largest auto company, owns 61 plants around the globe. Only one, in Chattanooga, Tenn., does not have a union. VW, with the assistance and encouragement of the capitalist state, intends to keep its only U.S. assembly plant union-free. 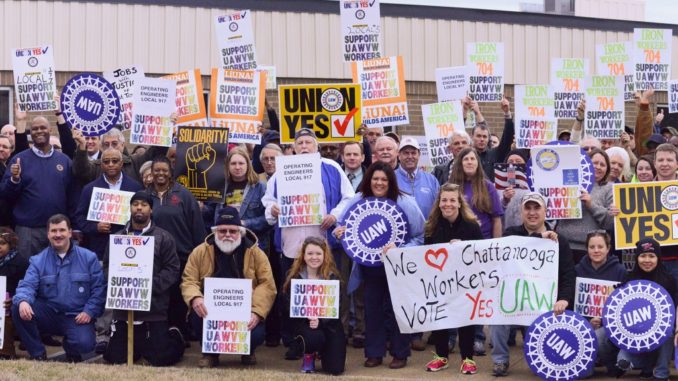 Chattanooga VW workers were fighting for a union even before this 2015 photograph was taken.

When the United Auto Workers first sought to represent the plant workers, the union narrowly lost a 2014 election supervised by the National Labor Relations Board. At the time, VW itself feigned neutrality. False claims by right-wing politicians that a pro-union vote would mean less work in the plant, coupled with a barrage of well-funded anti-UAW ads, were enough to tilt the vote against union representation.

However, the high rate of workplace injuries, a key issue in the union drive, did not decrease after the vote. The UAW, with a majority of VW workers signing cards authorizing representation, petitioned the NLRB April 9 to hold another election in late April. VW asked the board to delay holding an election and review company arguments against conducting one.

With three of the five NLRB members voting, two voted in VW’s favor and one against. Then May 22, with four of its five members appointed by President Trump, the NLRB ruled 4-1 that an election could not be held.

How could this be justified? Normally, the NLRB requires that only 30 percent of a potential bargaining unit sign union authorization cards to hold an election. In this case, the union had a solid majority.

VW’s arguments were based on a 2015 vote by a smaller unit of workers in the plant, about 160 skilled maintenance workers, to have the UAW bargain on their behalf. The NLRB ordered VW to recognize the union as their representative.

For there to now be an election involving all the plant’s hourly workers, VW claimed, the maintenance unit would first have to decertify the UAW.

What makes this case ludicrous and hypocritical is that VW has spent the past four years denying these maintenance workers the right to union representation — based on the fact that they are only a small minority of the whole workforce. Moreover, the UAW certified to the NLRB that it had voluntarily withdrawn as a representative of the maintenance trades. That the board majority could uphold VW’s argument demonstrates its blatant anti-union bias.

Now the UAW has to wait for a vote of the maintenance unit to decertify itself, then wait for the NLRB to conduct a plantwide election.

What VW and their anti-union political partners in Tennessee and Washington are banking on is being able to use the time lag to turn workers against the union. Just like their counterparts at Nissan in Mississippi, VW management will hold more mandatory “captive audience” meetings and one-on-one sessions with workers to create an atmosphere of fear and intimidation.

However, there are signs that the stalling strategy will backfire. UAW Local 42 has spent the past five years convincing workers of the benefits of union representation. The denial of the basic right to vote for union recognition has infuriated plant workers, along with other unions and the Chattanooga community at large. The newly formed Center for VW Facts has exposed VW’s false anti-union claims on TV and radio.

The UAW, joined by 17 area unions, as well as local civil rights organizations, held a rally May 21 to denounce union busting by VW and the NLRB. Some of the union delegations and representatives included the Chattanooga Area Labor Council, United Steelworkers and the Amalgamated Transit Union. Downtown Chattanooga was packed with union supporters chanting, “No hypocrisy, let them vote. It’s about democracy, let them vote.”